James ‘Jim’ Glickenhaus and his eponymous company, Scuderia Cameron Glickenhaus (Cameron is the surname of his wife, Meg) have developed something of a reputation as the romantic, old school ‘garagistes’ of modern Sportscar racing.

What started off as a project building an homage to the iconic Ferrari P3/4, the Pininfarina-redesigned, Ferrari Enzo-based SCG P4/5, has morphed into a company producing bespoke road and racing cars.

The SCGP4/5 gave birth to a Competizione version in 2011, built around a Ferrari 430 which would go on to finish 12th and first in class in the 2012 N24. This was the first car to be badged as an SCG following a dispute with Ferrari over use of the company’s emblem. Glickenhaus very publicly, via the medium of YouTube, levered the Prancing Horse from its nose and hand drew SCG’s motif and the initials SCG in its place.

The next logical step was to produce a car entirely of its own, which took the form of the SCG 003 (originally called the P33), a midengine machine with a composite tub and a no compromise aero package.

Available in race, track only and road versions, the car cemented Scuderia Cameron Glickenhaus’ reputation as a bona fide operation, and the 003C saw action at the N24 and various VLN races between 2015 and ’17.

While the 003 and its variants were the genesis of SCG as a company, they paved the way for the firm’s escalation into a fully-fledged, low volume Sportscar manufacturer. Glickenhaus is nothing if not ambitious in his aims and, in late 2017, announced SCG would be building a new car, the 004S, along with a racing variant, the 004C.

Like the 003, the SCG 004 is available as a road-legal GT 004S; a road-legal but trackorientated version, the 004CS; and the full competition-spec 004C, all fitted with GMsourced V8s in various states of tune.

The ‘S’ version has a nominal output of 650bhp and is available with a traditional manual transmission, while the track-focussed ‘CS’ version offers 800bhp, a dual-clutch, semi-auto gearbox and other high-performance options. The ‘C’ is a GT3/GTE-spec racecar. 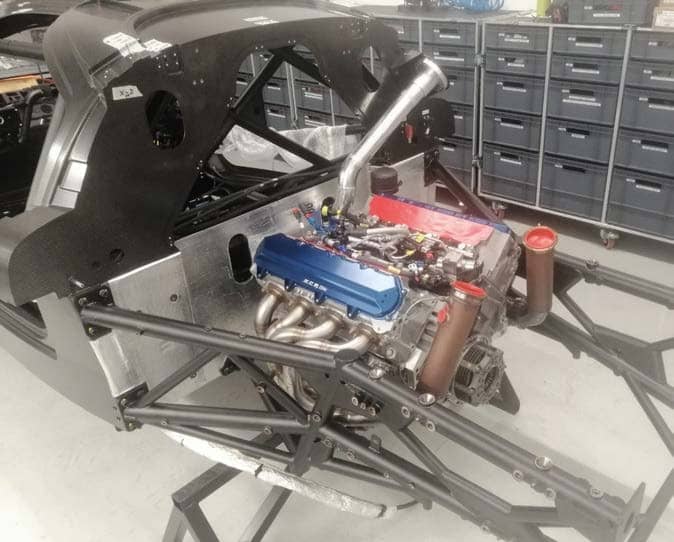 The SCG 004 is based around a central carbon tub, which in road car trim seats three, the driver sitting centrally and slightly ahead of two passengers. An additional benefit of this is that the driver is afforded considerable side impact protection compared to a GT car with a more traditional seating arrangement.

At the front, the double wishbone suspension mounts directly to inserts in the carbon structure, with the dampers sited just below the lower edge of the windscreen, actuated by rockers.

Extending forward of the tub are two square section, aluminium crash structures, between which sit a heat exchanger. The front and rear uprights are machined billet aluminium, as are the upper front wishbones. The lower front and rear wishbones are fabricated steel.

The rear bulkhead of the tub acts as the mounting for subframe assemblies that carry the suspension and drivetrain. The engine is not a stressed member and it, along with the transmission, is supported by a tubular steel structure that triangulates from the tub to the transmission and rear suspension mountings.

At the rear, the unequal length double wishbone suspension is affixed to a triangulated ladder frame, the inboard coilover dampers are arranged horizontally across the car, again actuated by rockers.

The compact sequential transmission is produced for SCG by Xtrac, with the gears in a transverse arrangement. On either flank of the car, below the rear quarters, sit cooling radiators, fed by ducts sculpted into the sides of the body. The main engine air feed is situated on the roof.

The carbon tub is augmented by an extensive steel roll over structure, which features front and rear hoops and extensive bracing. Though some GT cars, such as the GTEspec Ford GT, incorporate the rollcage within the composite chassis structure, for the 004C a standalone ’cage was necessary, as Glickenhaus explains: ‘There is a GT3 regulation that states you cannot have the roll over structure within the carbon monocoque. The rollcage inside the tub is simply to comply with the homologation.’