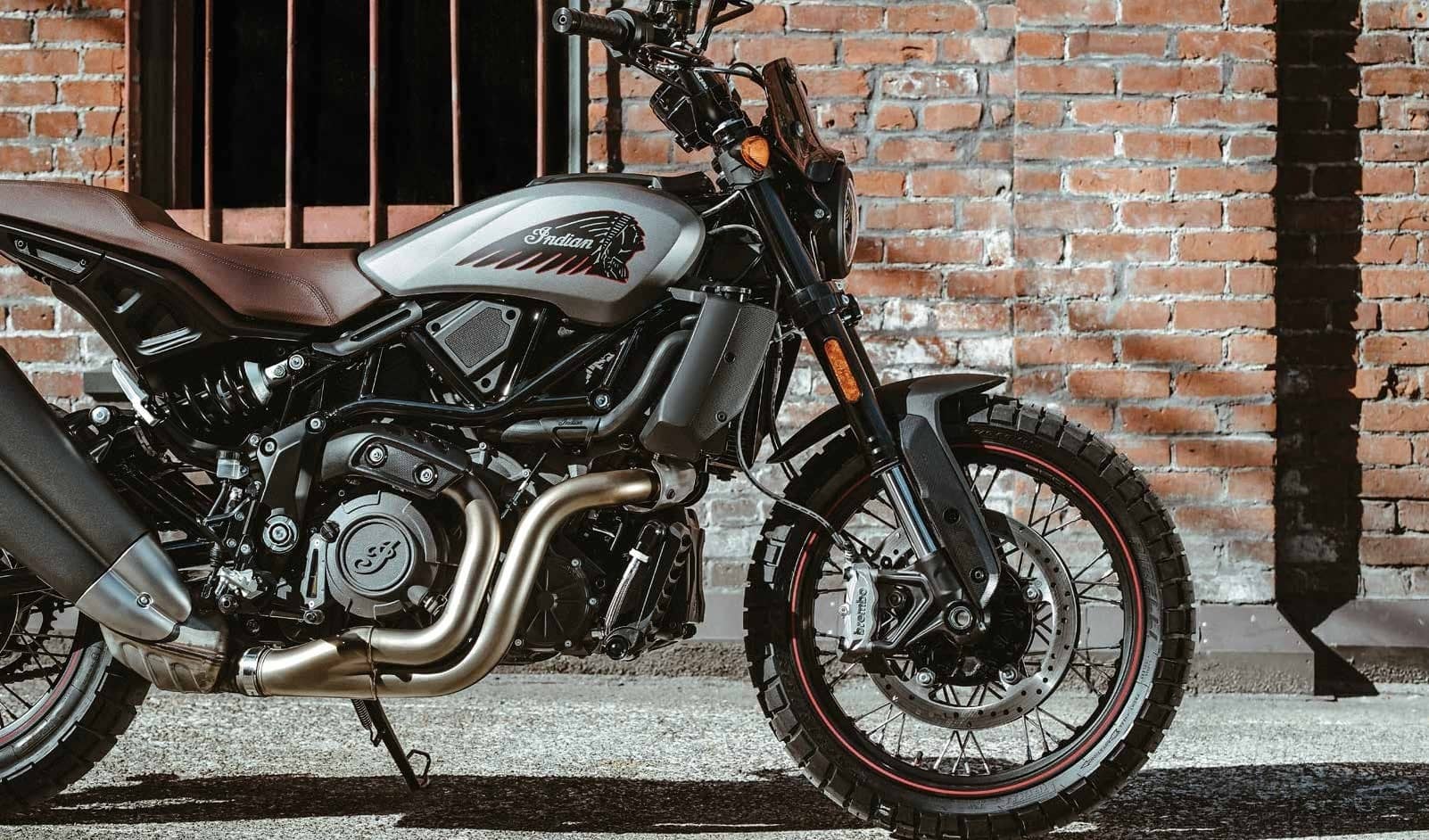 The 77th edition of the Esposizione Internazionale Ciclo Motociclo e Accessori (EICMA 2019) saw the launch of several motorcycles and scooters, apart from two-wheeler accessories like apparel, helmets, tyres and components in Milan, Italy.

The latest edition of this International Bicycle and Motorcycle Show witnessed a global “Revolution in Motion” that saw the presence of 1800 brands from more than 40 countries.

India’s home grown global companies like Royal Enfield (Eicher Motors) and Hero MotoCorp too participated in the show and showcased their new products.

Motown India takes you through some of the two wheelers that were launched at the Eicma 2019. 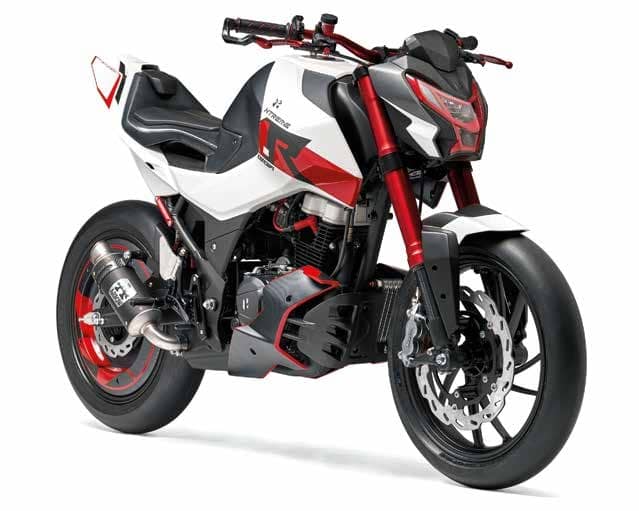 The Xtreme 1.R is inspired by the precision of an arrow and it boasts of an aggressive stance. The Xtreme 1.R offers a sneakpeek at the next generation of the Xtreme brand. It has a kerb weight of less than 140 kg. Besides a smart design, the motorcycle comes with LED headlamp and signature LED tail-lamp.

The new Rally-Kit for the XPulse 200 has been developed and tested at Hero MotoCorp’s R&D hub – the Centre of Innovation & Technology (CIT) in India. The kit consists of fully adjustable, taller front and rear suspension, flatter seat for easy position change while offroading, extended gear pedal to suit off-road boots, handlebar riser for greater maneuverability while riding standing up, extended side stand for the additional ground clearance, front sprocket 12T, rear sprocket 40T for greater grunt, and rally tyres for relentless traction. The Rally kit is not homologated for road use. 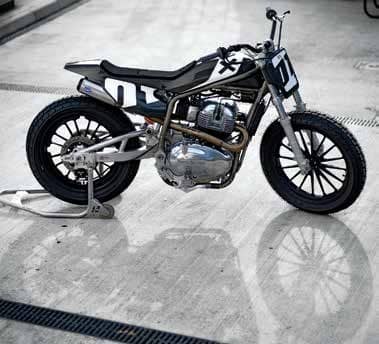 Royal Enfield, part of Eicher Motors, had on display a range of motorcycles at the show. The company unveiled six custom motorcycles including two new Flat Track Customs. The Himalayan motorcytcle was on display with some fascinating colours. The company also showcased the newly launched Bullet Trials for the first time to motorcycling enthusiasts in Italy. Besides this, it had on display its entire motorcycle range including the Continental GT 650 and Interceptor INT 650 models.

The new Bullet Trials 500 is a tribute to the legacy of Royal Enfield’s resilient Bullet Trials motorcycle that changed the face of motorcycling with its seminal design and also went on to win several Trials championships of the 1940’s and 1950’s ridden by Royal Enfield factory riders, reinforcing the showcase of Bullet’s resilience and endurance

As for the custom builds, the Twin Tracker, Nought T GTs, Two smoking barrels and Gallinella are based on the Royal Enfield Twins 650, while the MJR Roach aptly enhances the versatility of the Himalayan. 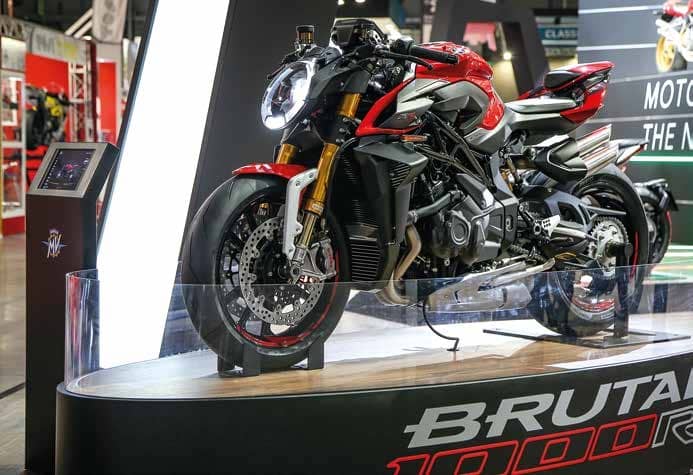 MV Agusta presented the Brutale 1000RR, a year after the launch of the exclusive Serie Oro. The Brutale 1000RR, a premium naked superbike powered by 208 hp, differs from the Serie Oro for some specific details concerning the equipment, but features the same base, the same engine as well as the same electronics. The motorcycle has been built as a powerful naked bike easy to handle and accessible by most motorcyclists at the same time. Full LED headlights with cornering lights, carbon fiber fairings, 5 inches TFT display, for example, are still part of this project. Useful is the MV Ride App, which allows the riders to share routes and read navigation data directly from the dashboard. Specific focus has also been given to aerodynamic solutions such as the “wings” positioned beside the radiator. This last-mentioned element improves downforce and adds load to the front end, limiting lift at high speed. 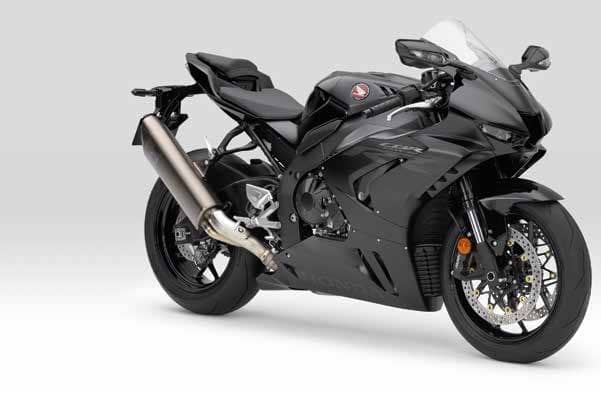 The Honda CBR1000RR-R Fireblade is an all-new Honda superbike which is capable to offer stunning performances and is determined to become the absolute protagonist not only in the market but also in the Superbike Championships. The CBR1000RR-R Fireblade has been redesigned from the ground up, starting with the engine that now adopts pistons of the same diameter as those used in the MotoGP. Its engine is in fact capable of pumping out 217.5 hp at 14,500 rpm and its weight in running order with fuel is declared in 201 kg. Frame, swingarm and suspension system are also part of this revolution. The Fireblade is equipped with Showa and Nissin components, while the Fireblade SP features Öhlins and Brembo.

As for the new Honda CB1000R, a special focus has been given on Black in terms of many details, such as the steering plates, handlebar risers and the headlight frame. With the 2020 model year, the new Matt Pearl Glare White coloring makes its debut also. The 145 hp and 104 Nm engine together with the chassis remain unchanged. The Honda CB1000R 2020 is now offered in two versions, standard and CB1000R +. The latter comes with quickshifter, heated grips and a range of premium accessories such as metallic meter visor and seat cowl, front fender panel, hugger panel and radiator grill. 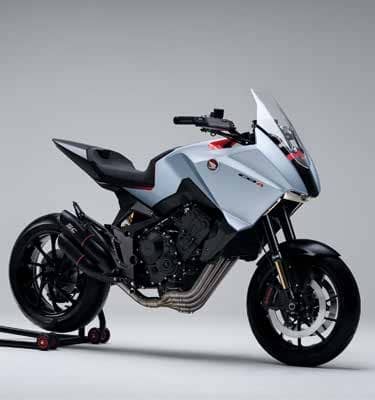 Honda also unveiled the CB4X Concept. The experimental machine – developed under the theme of ‘fun seven days a week’ – blends elements of Sport and Touring with a healthy dash of Crossover. It’s a design from the imaginative pen of Valerio Aiello, and his team of young designers, and is born from the desire to explore – and push – existing boundaries.

Its engine is a classic inline four-cylinder power plant – the essential signature of the Honda Wing. The fuel tank hunches forward, like a cobra ready to attack its prey, while the screen is fully adjustable and integrates into the fairing. And the headlight is set like a diamond, injecting aggressive sophistication alongside the Daytime Running Lights (DRL). A beautiful aluminium subframe underpins the short, sharp tail while the 17-inch front wheel maximises steering precision. The Honda CB4X is an idea dedicated to those riders who live for sports riding – but don’t want to give up the possibility of relaxing, two-up travel experiences whenever or wherever. 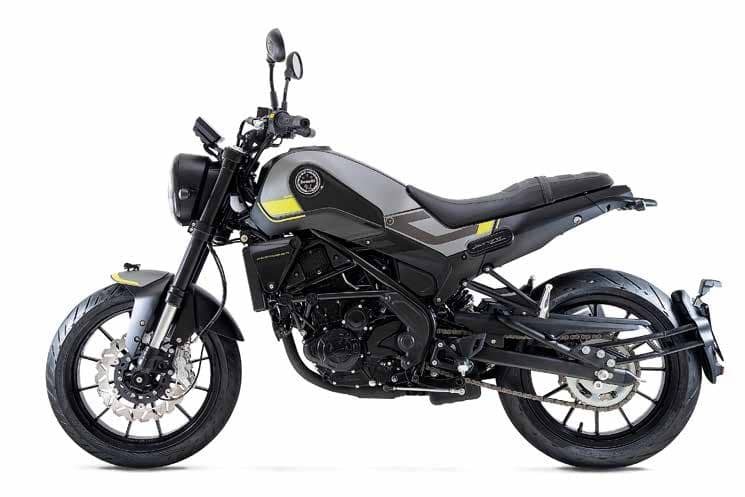 This Italian motorcycle maker unveiled the Benelli Leoncino 800 and 800 Trail. The historic brand from Pesaro evolved its classic (and successful) family range introducing a new technical platform, based on the twin-cylinder inline 754 cc engine capable of 81,6 hp, which results perfectly integrated into the steel trellis frame. This mechanical element features an excellent 50mm Marzocchi fork along with Brembo radial calipers. The Benelli Leoncino 800 is a one-ofa-kind street classic bike equipped with 17” wheels and an exhaust positioned low. The 800 Trail version recalls immediately the Scrambler models and is characterized by 19” front wheel, high exhaust and suspension system featuring an increased travel. Within 2020 both models from Benelli are expected. 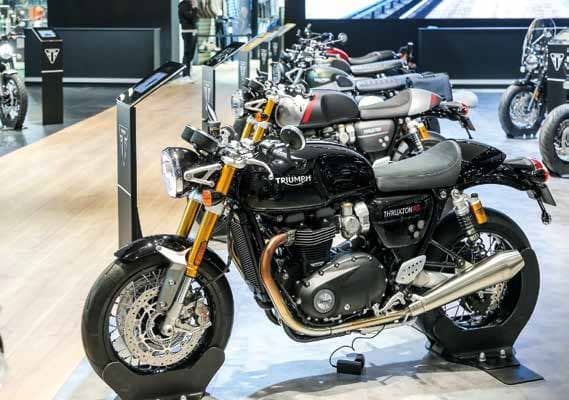 The UK based motorcycle manufacturer Triumph Motorcycles unveiled the Triumph Thruxton RS. The Triumph Thruxton RS pushes the limits of the Modern Classic even further. The new machine, equipped with a renewed 1200cc high power Thruxton RS engine, achieves 8hp more power than the previous “R” version. This is delivered by significant engine upgrades including high compression pistons, revised ports and cam profile, a secondary air system and a whole host of lighter weight engine components. It also delivers higher torque punch low down and across the entire rev range, peaking at 112Nm at 4,850 rpm, 700 rpm lower than its predecessor. Furthermore, all these engine updates deliver a 20% reduction of inertia and a new more responsive Thruxton RS engine. 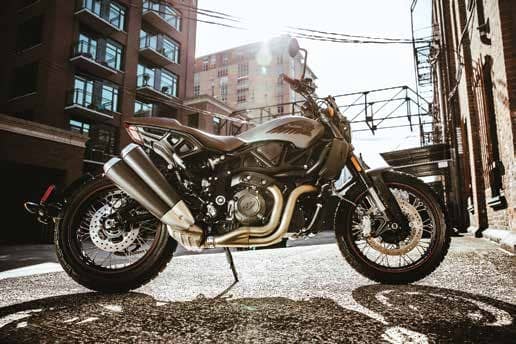 Indian Motorcycle, America’s First Motorcycle Company, introduced 2020 FTR Rally. The 2020 FTR Rally builds on the 2019 FTR design framework but adds authentic retro styling to the modern performance capabilities. The FTR Rally features Titanium Smoke paint with the Indian Motorcycle headdress logo, aluminium wire wheels with red pinstripe, brown aviator seat, a new rally windscreen and Pirelli Scorpion Rally STR tyres. With a commanding riding position and nimble handling, this bike is perfect for city streets or back, canyon roads. The motorcycle is equipped with cruise control, a USB fast charge port, and new ProTaper handlebars that are 50mm higher for better comfort and handling. The FTR Rally also features an LED headlight and LED turn signals offering better visibility with minimal maintenance. The 1203cc V-twin engine features a smooth power delivery with loads of low-end punch. The engine produces 123 hp, 120 Nm of torque and features a flat torque curve to deliver a fun riding experience in all conditions. The engine is housed in a black trellis frame and the FTR Rally will continue to feature an inverted front suspension with radially mounted dual Brembo brakes for exceptional control and stopping power. The 2020 FTR Rally is compatible with the entire range of 40+ accessories specifically developed for the FTR platform. 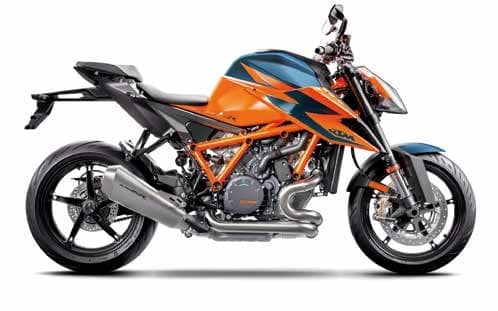 The KTM 1290 Super Duke R has been ‘re-Beasted’. The new KTM 1290 Super Duke R, at its third generation, has been reworked although maintaining the traditional family feeling with the rest of the range. The bodywork features now sleeker lines while the chassis has been completely renewed. The frame remains at sight and maintains the steel tubes trellis pattern. Regarding the engine, the LC01 twin-cylinder 1.301 cc has been updated and now is powered by 180 hp and maximum torque of 140 Nm. Its dry weight is declared in 189 kg (-6 kg). Electronics have been refined and modern to be even more effective.

The KTM 890 Duke R is a sportier and edgier naked bike for hard riding. More power and more torque come from the new engine, which has been teamed with ‘racier’ ergonomics, better brakes, and fully adjustable WP APEX suspension. The KTM 890 Duke R is ideal for the motorcyclist wanting a more extreme experience or searching for bigger thrills and ‘flickability’ compared to a larger capacity model. 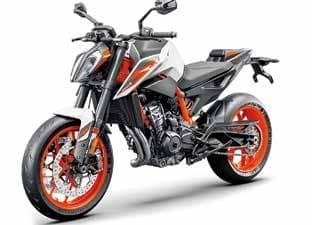 The new KTM 390 Adventure has harnessed the attributes and DNA from the popular and highly rated KTM 790 Adventure as well as the development information gleaned from nearly two decades of Dakar Rally success. A breezy, agile, and ideal entry model for riders keen to discover the ‘adventure’ sensation, this motorcycle offers added versatility for touring and light offroading. Using elements of the KTM 390 Duke as a base, the KTM 390 Adventure offers proximity to the feeling and performance found at the root of the all-conquering KTM 450 Rally but with crucial A2 license compatibility and current Euro emissions standards as part of the package.