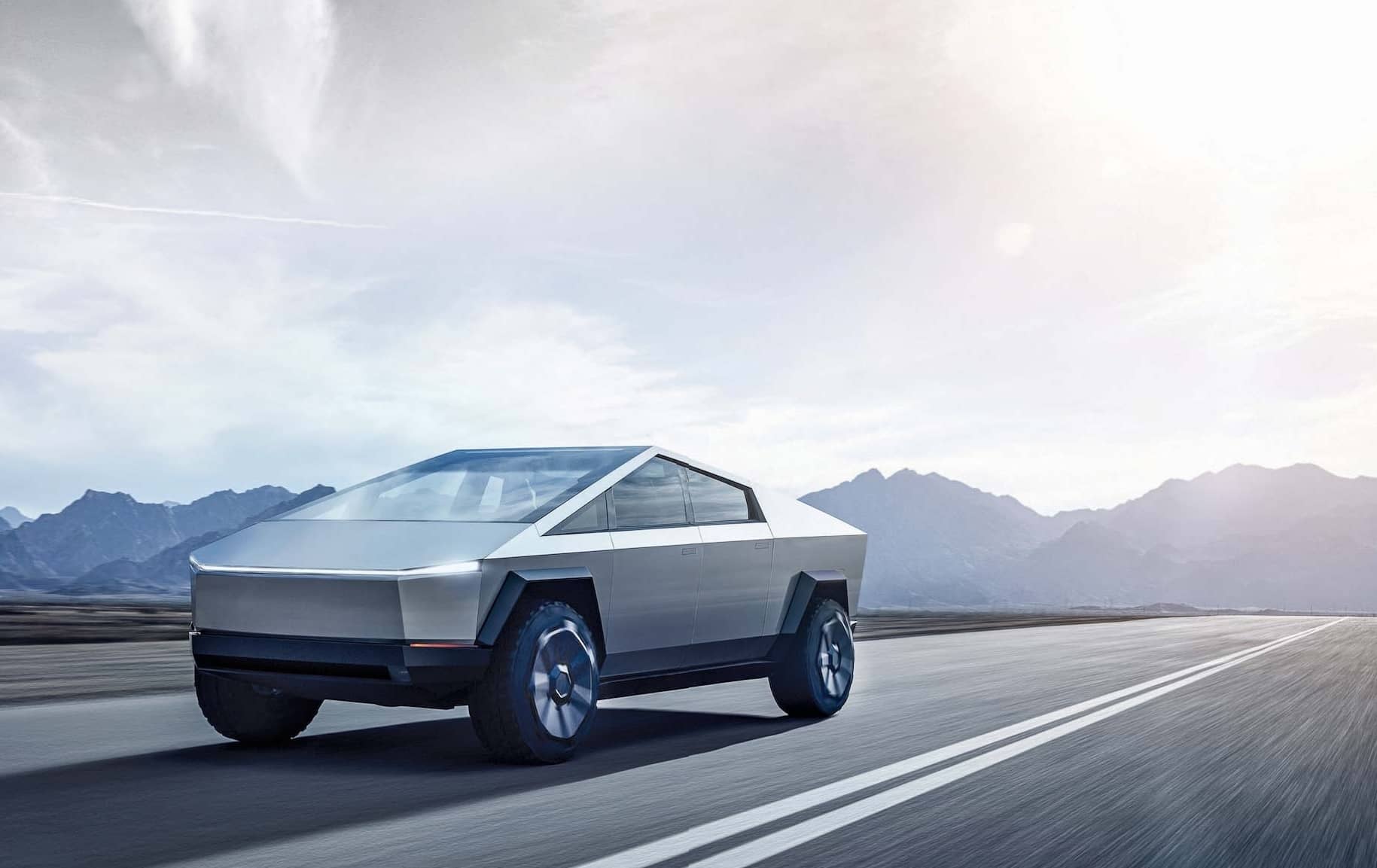 Seeing my bride walk down the aisle toward me at our wedding. Driving my first car home. And now, in a somewhat distant but still significant third place: my initial glimpse of the new, industry-changing Tesla Cybertruck electric pickup in a clandestine September meeting at the automaker’s design headquarters just outside of Los Angeles.

Few outsiders have ever been allowed inside the top-secret Tesla Design Studio, nestled away next to the sprawling SpaceX factory, a Falcon 9 rocket, and a scale replica of Elon Musk’s Hyperloop in a corner of the Hawthorne Airport. Elon and his righthand man, chief designer Franz von Holzhausen, invited us to be the first journalists inside to see the automaker’s most hotly anticipated debut since the Model 3: the Tesla pickup truck.

Leading up to the truck’s public unveiling, MotorTrend got behind the scenes with the Tesla team, provided feedback, and watched the Cybertruck go from a life-size clay model to a (purportedly) bulletproof working prototype.

As we enter the studio, Franz scans his key card and holds open the door as Elon leads us into the repurposed airfield hangar, where the first, radical Northrop flying wings took shape. Now serving a much different purpose, the well-lit design studio nonetheless sports an equally revolutionary machine today.

Like a Zumwalt-class destroyer meets a leftover Blade Runner prop, Tesla’s truck looks like none I’d ever seen before.

Its design is deceptively simple. Its profile is diamondlike, with five simple lines. Its nose is wedge-shaped, its sheet metal quickly merging with a single massive pane of windshield glass—“bulletproof,” Elon says (with hubris, as it turns out). Just as quickly as that line rises, it drops back down, with the truck’s sail panels (which will include built-in storage in the production version) and garage/tambour door– style roll-up tonneau cover completing its faceted physique.

Its head-on view is equally arresting; a cyclopean single LED flows across the nose to join the fender flares, and a second off-road-oriented lightbar lives at the top of the windshield. Its polished, stainless steel sheet metal has a few creases to define the tumblehome and curves toward the rear of the truck’s 230.0-inch length—roughly the length of a conventional Ford F-150 crew cab short bed. 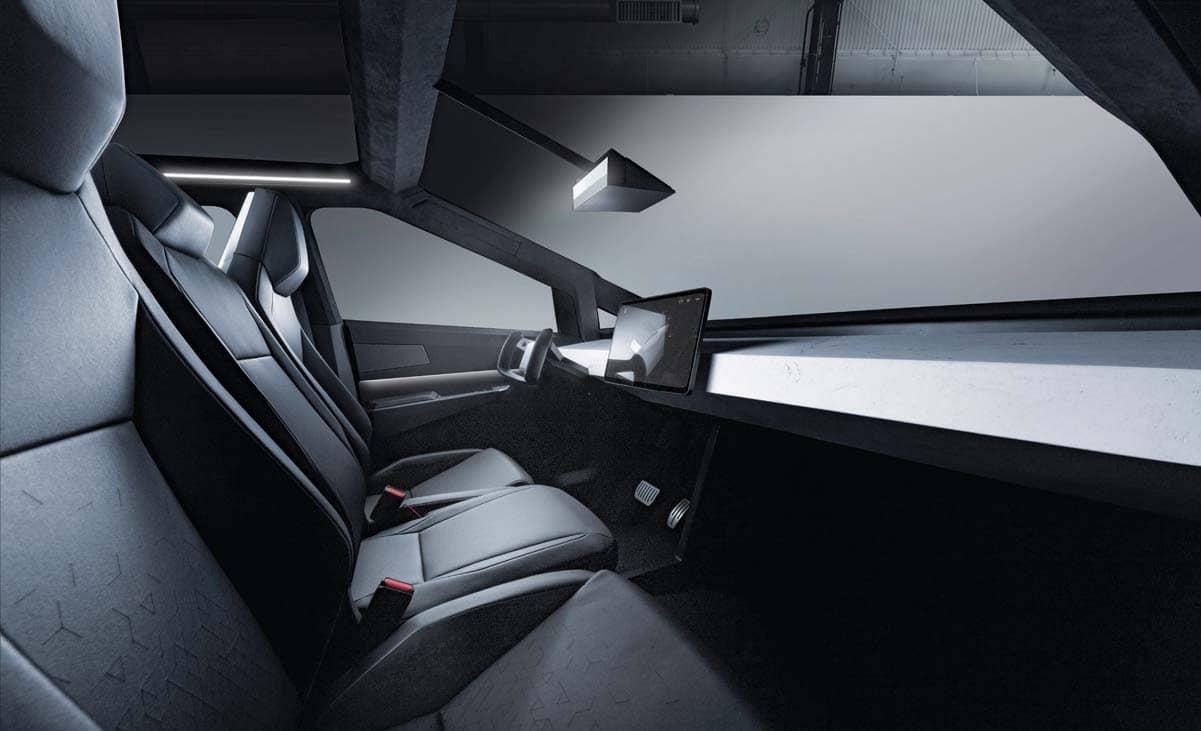 Draped in 3mm-thick unpainted stainless steel that’s folded into shape, the truck features four doors, a small frunk, and a 6.5-foot bed with accessory rails and four tie-downs. Notably, the bed has no wheel well intrusion despite a 57.0-inch overall width and accommodating 35-inch off-road tires. There is a Honda Ridgeline–like trunk cut into the bed floor. The Cybertruck’s wheelbase stretches 149.9 inches, and Elon claims its steel skin is bulletproof to 9mm rounds.

If you want a color besides the polished silver of stainless steel, the Cybertruck can be vinyl-wrapped—which lowers environmental impact and the cost of a paint shop.

“What do you think?” Elon asks. A collective, stunned, “Wow,” is about all we can muster. All the renderings by the automotive chattering classes? So, so wrong. 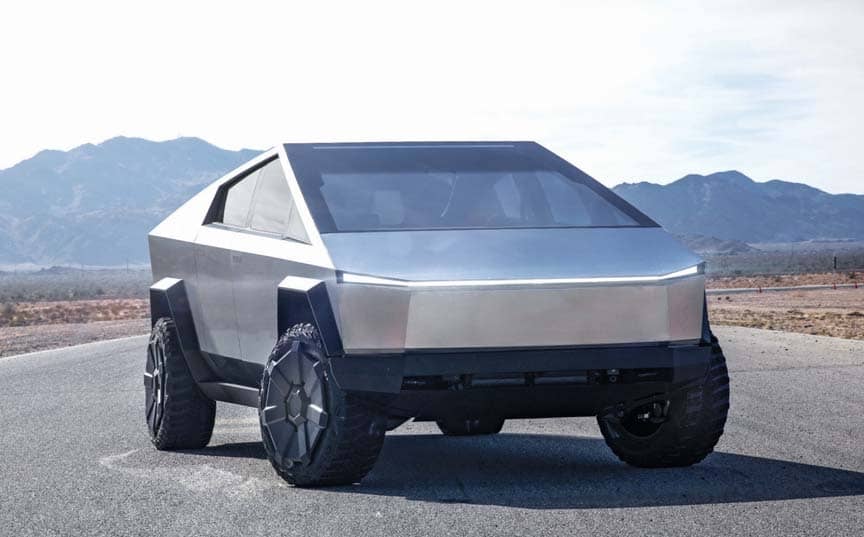 A month later we had a chance to go back and check in on Tesla’s progress on the Cybertruck. The life-size clay model we’d seen before had— quite shockingly—been joined by a half-finished Cybertruck running prototype. With Black Sabbath and Tool blaring from an unseen stereo, the workshop was frenzied with activity. It was midafternoon Friday; Elon wanted Tesla’s EV pickup assembled and driving through the SpaceX factory by Sunday. The reveal was two weeks away.

Tesla doesn’t publish horsepower figures anymore, but we estimate up to 690 hp and 824 lb-ft of torque combined from the twin motors in the Raven powertrain. The future three-motor Plaid powertrain will certainly find its way into the Cybertruck, and it could put out an estimated 800 hp and 1,000 lb-ft of torque. Like all Teslas, the Cybertruck’s motors are backed by a one-speed automatic. Feeding the motors is Tesla’s latest battery tech, of which the company has shared little.

The standard battery pack is mounted underneath the cab, just forward of the roll-up tonneau cover’s storage compartment (beneath the pickup bed floor), and offers up about 300 miles of claimed range. A new, double-stacked battery will give the Cybertruck up to 500 miles of range, Tesla says. Construction of the prototype is “unibody-on-frame” in the same vein as the new Land Rover Defender, but the production Cybertruck will be pure unibody. 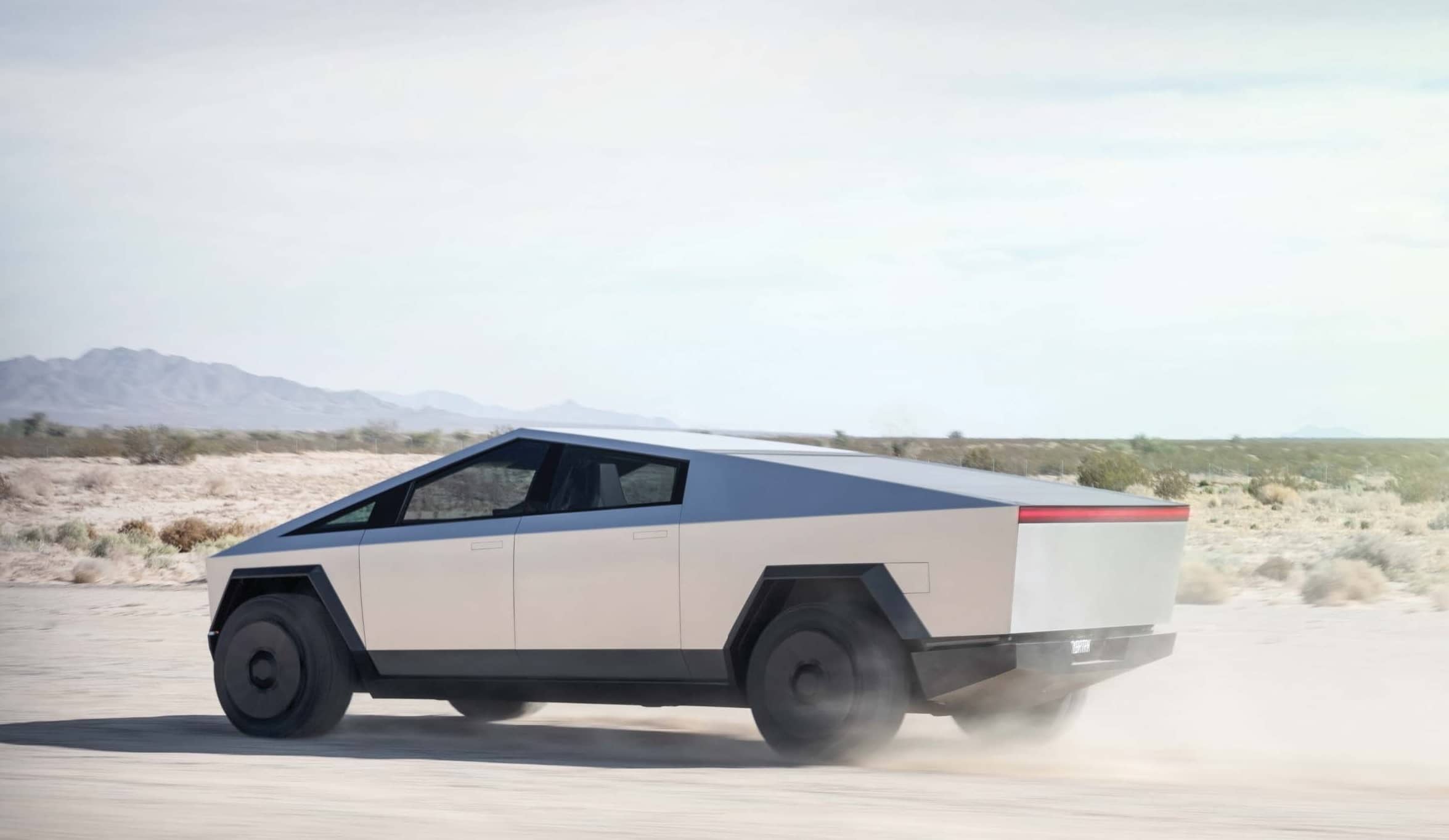 Although most off-roaders and pickup owners would sneer at an air suspension, Tesla opted for a significantly beefed-up version of the Model X’s air setup with upper and lower A-arms at all four corners. Air suspensions typically offer lots of ground clearance but little meaningful travel, but based on nothing more than watching the Cybertruck get lowered from its lift to the ground, that shouldn’t be an issue with this truck. The amount of suspension travel was, frankly, insane—hinting that Tesla might be targeting the Ford F-150 Raptor’s desert-running credentials.

The air suspension has further benefits, too. Aside from the obvious ride quality and on-road performance implications, it’ll give the Cybertruck multiple ride heights, load-leveling (both fore and aft and side to side), and, most interesting, a mode that dips the truck’s rear end and tailgate to the ground, allowing, for example, a motorcycle or ATV to easily roll up into the bed via built-in pull-out ramps. 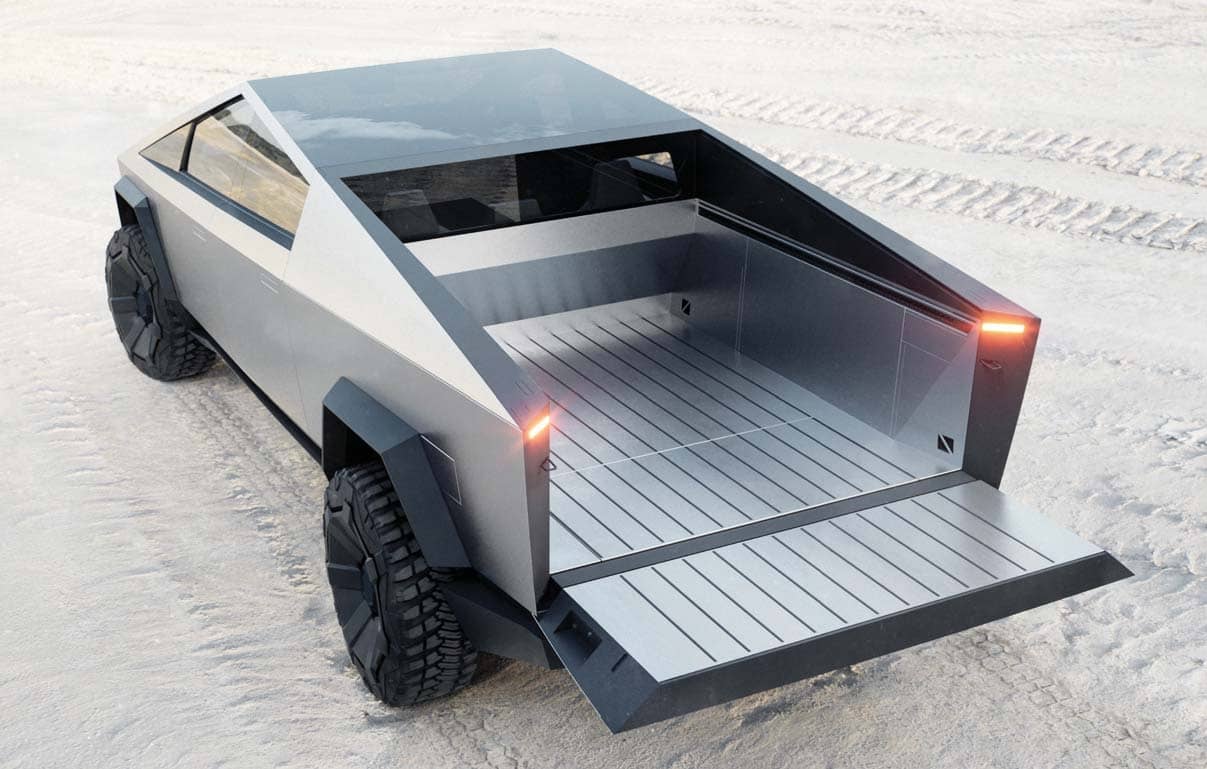 Projected towing and payload capacities are all preliminary, but maximum tow capacity will be about 14,000 pounds and payload about 3,500 pounds.

The Cybertruck’s interior was still taking shape during both of our visits, but it’ll no doubt be the most familiar to current Tesla owners—and controversial to truck owners. The six-seat cabin features a single Model 3–style center screen, through which the driver will access the majority of the Cybertruck’s features and functions. 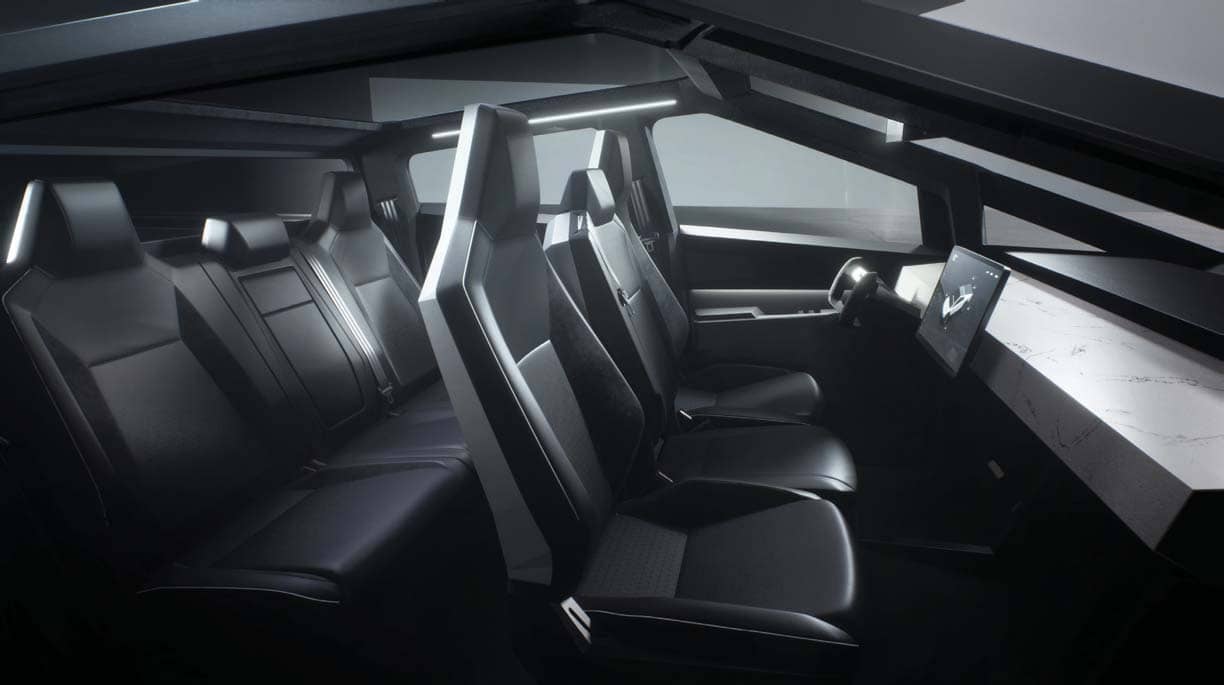 Both rows of seats are surprisingly roomy, with the front offering generous headroom thanks to the peaked roof. Visibility will no doubt be a challenge, as the hood and fenders are largely unseen from the driver’s seat (though this is addressed with a nose-mounted camera). The bed’s sail panels and roll-up tonneau also compromise rearward visibility. Tesla says this will also be addressed with a camera, but reversing with a trailer could nevertheless be challenging. 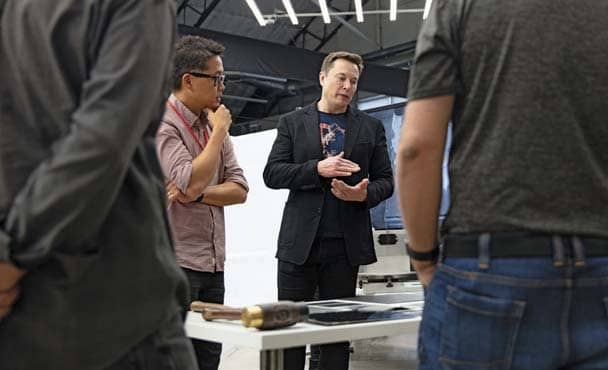