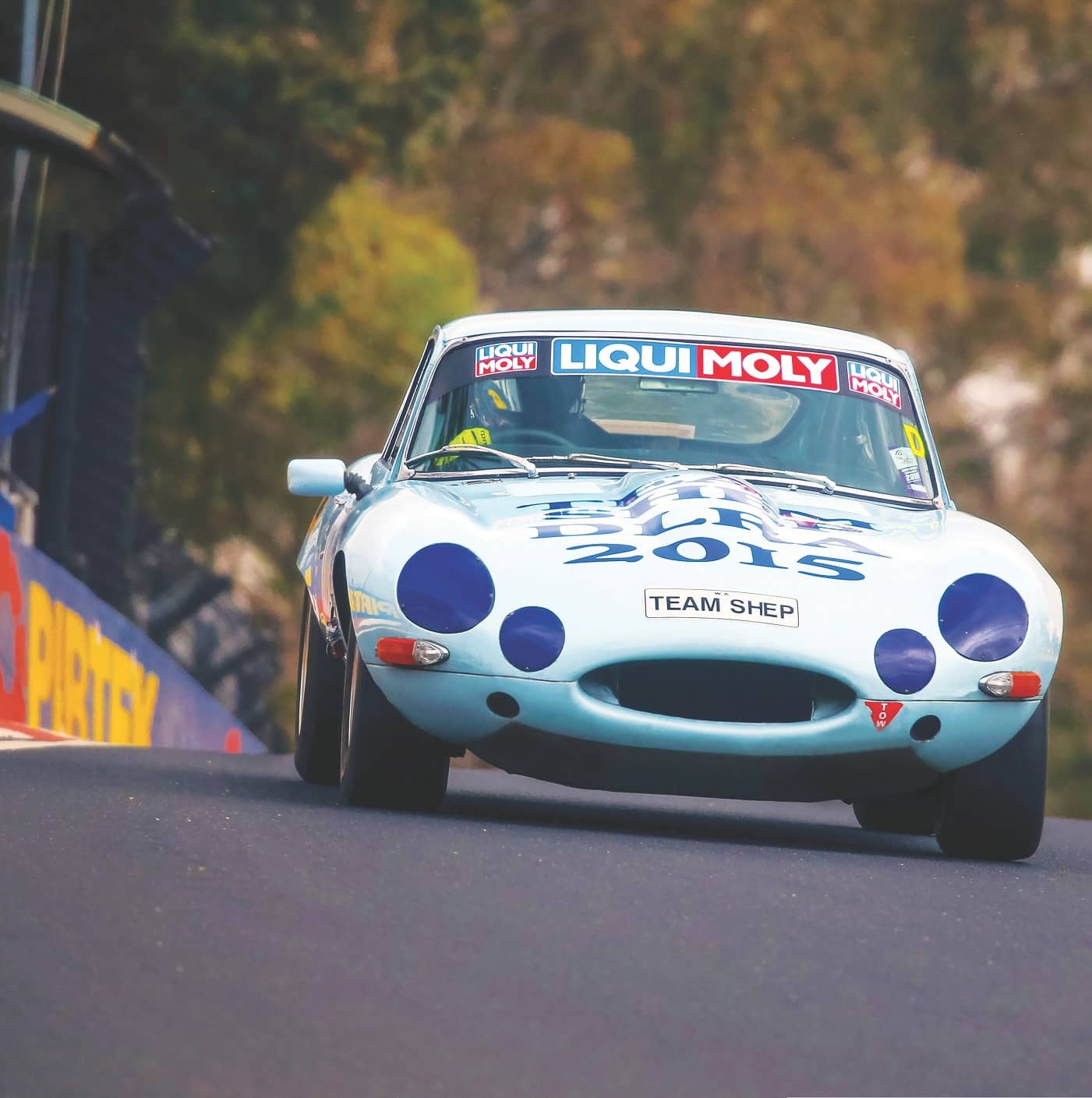 IN 2018, MY FATHER ‘AJ’, AND I HEARD ABOUT THE annual Challenge Bathurst motor event held over six days at Mt Panorama, Bathurst. In 2019 it celebrated fifty years of the Datsun 240Z with cars invited from all over Australia. Peter Harrold from the Western Australian Z Car Club asked if we were interested in sharing a truck with a bunch of their cars. We jumped at the chance, and as Peter wasn’t competing I appointed him my driving instructor.

The competition included two days of Supersprints, two days of Modern Regularity and finally two days of V8 Race Experience laps. We entered Modern Regularity and were due for twenty driving minutes on ‘The Mountain’ in six sessions. We agreed not to break their minimum lap time of two minutes and thirty-eight seconds - this being our first attempt there! The Jaguar was delivered to the depot for the 3700 kilometre trip across the continent, while I stayed home and watched videos of Peter Brock and practised on a gaming app featuring a four-speed Lightweight E-Type at Mt Panorama. 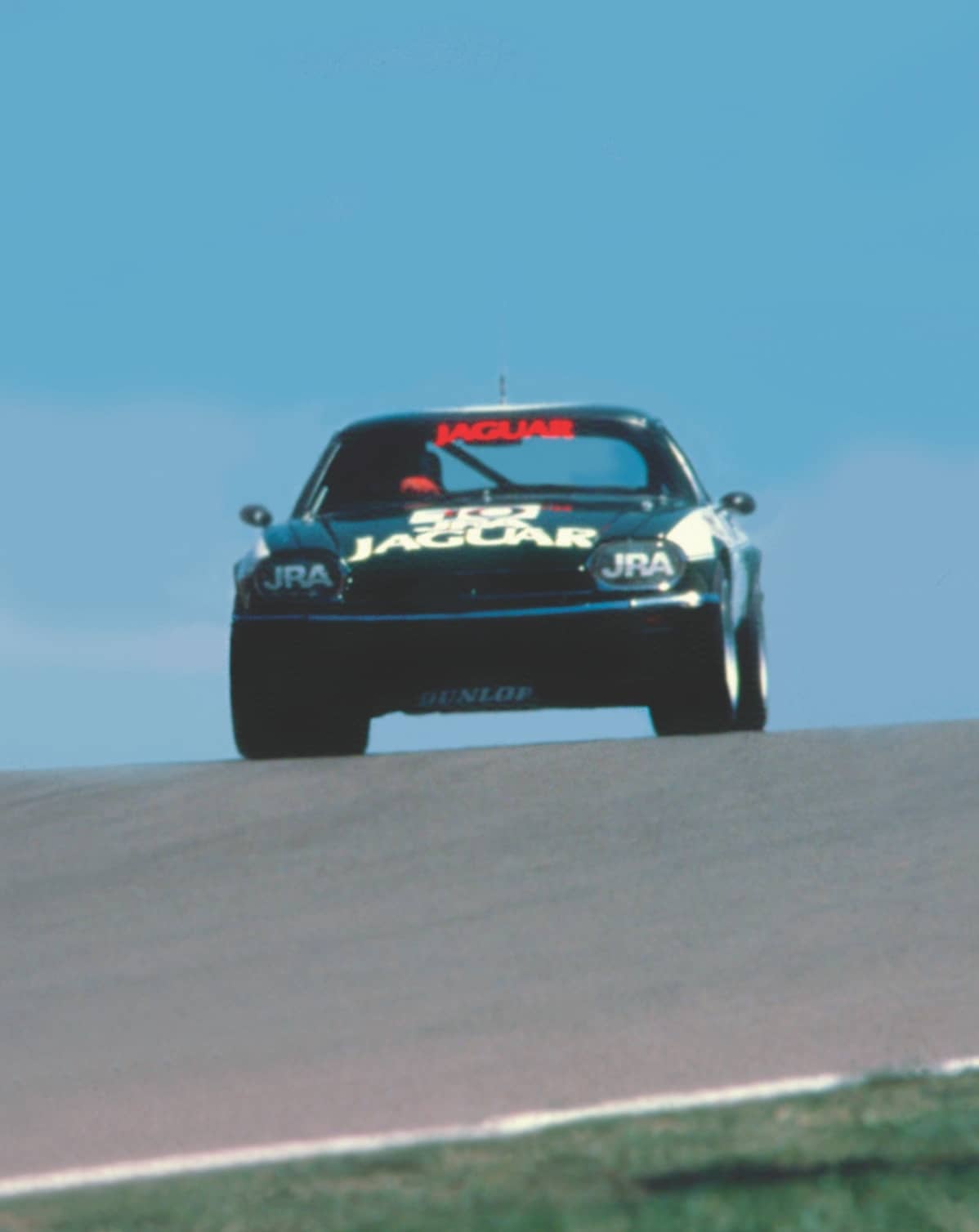 There was also advice from Dad who had driven his silver XK120 Roadster there with Bruce Abrey back in 1991 on the Repco Mountain Rally.

We boarded flight QF574 departing Perth at 5.30 am Wednesday morning and landed in Sydney at 12.40 pm. It was out of the airport by 1.15 pm and on the road to Bathurst.

The best tip was Leslie advising that tomato sauce was an excellent cleaner of copper pipework ...

We arrived at Bathurst about 4 pm and went straight to the track to see if we could drive it - no joy. We got as far as the Mountain Straight gate - but it was closed. We went into Bathurst to find our accommodation. The night was great fun, and everyone enjoyed themselves, before we headed off to dream about Mt Panorama. 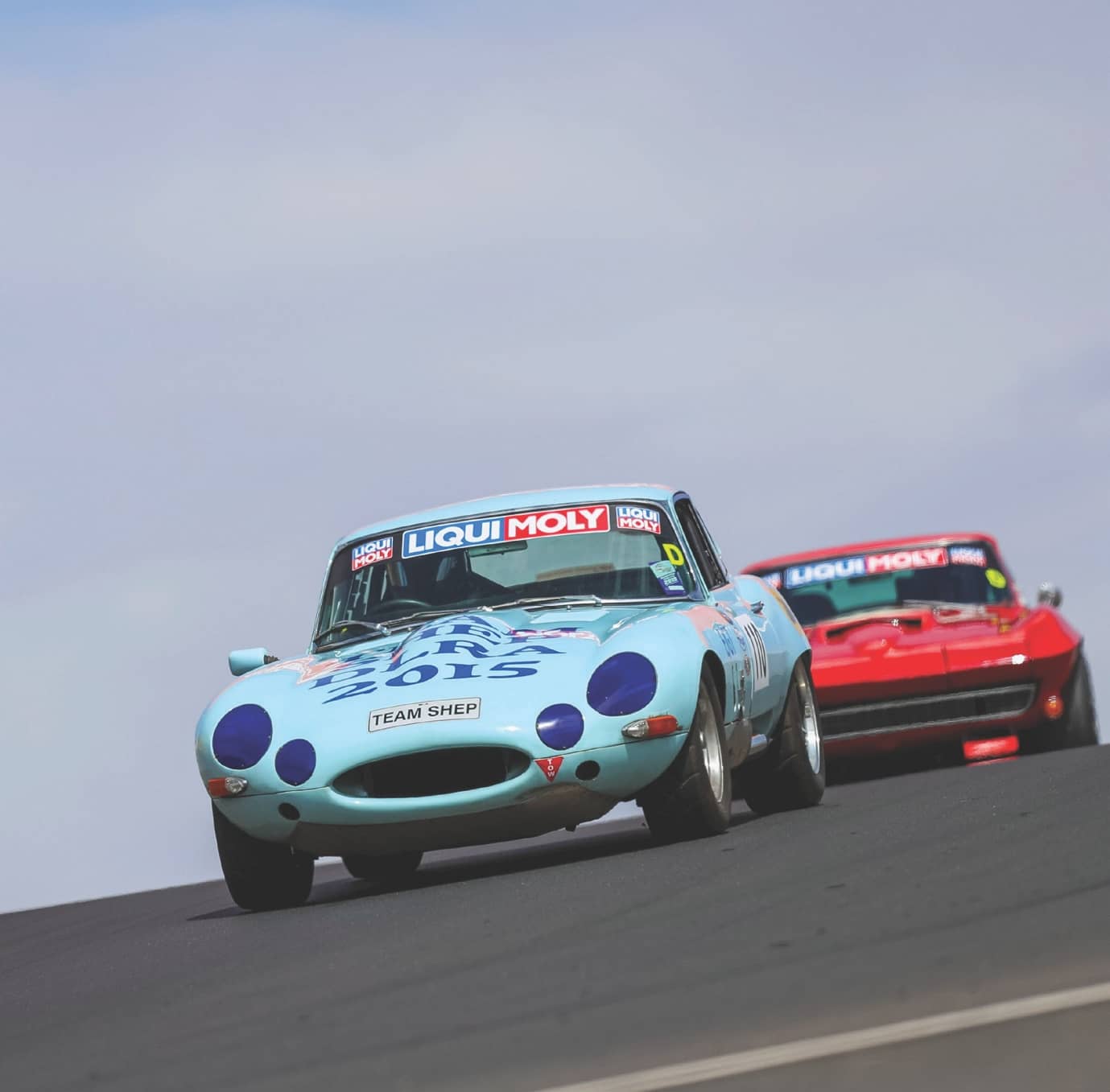 First thing was breakfast while Brad and I checked for new paperwork, but to no avail except for our sticker pack, so we watched some performances at the top of the track - specifically McPhillamy Park. The action started quickly and so did the incidents. The cars were flying over the top of the hill with van Gisbergen and Tander both noticeably faster than the rest of the pack.

Our credentials check was now done, and as soon as the truck arrived all the cars were unloaded, and hopefully we could get our's scrutineered that day. There was a small dint in the E-Type's front spoiler because of a spare truck tyre rubbing during the trip – it was annoying but would not cause a problem.

Instantly, Leslie started with his amazing work to get the E-Type sparkling and ready for the scrutineers. 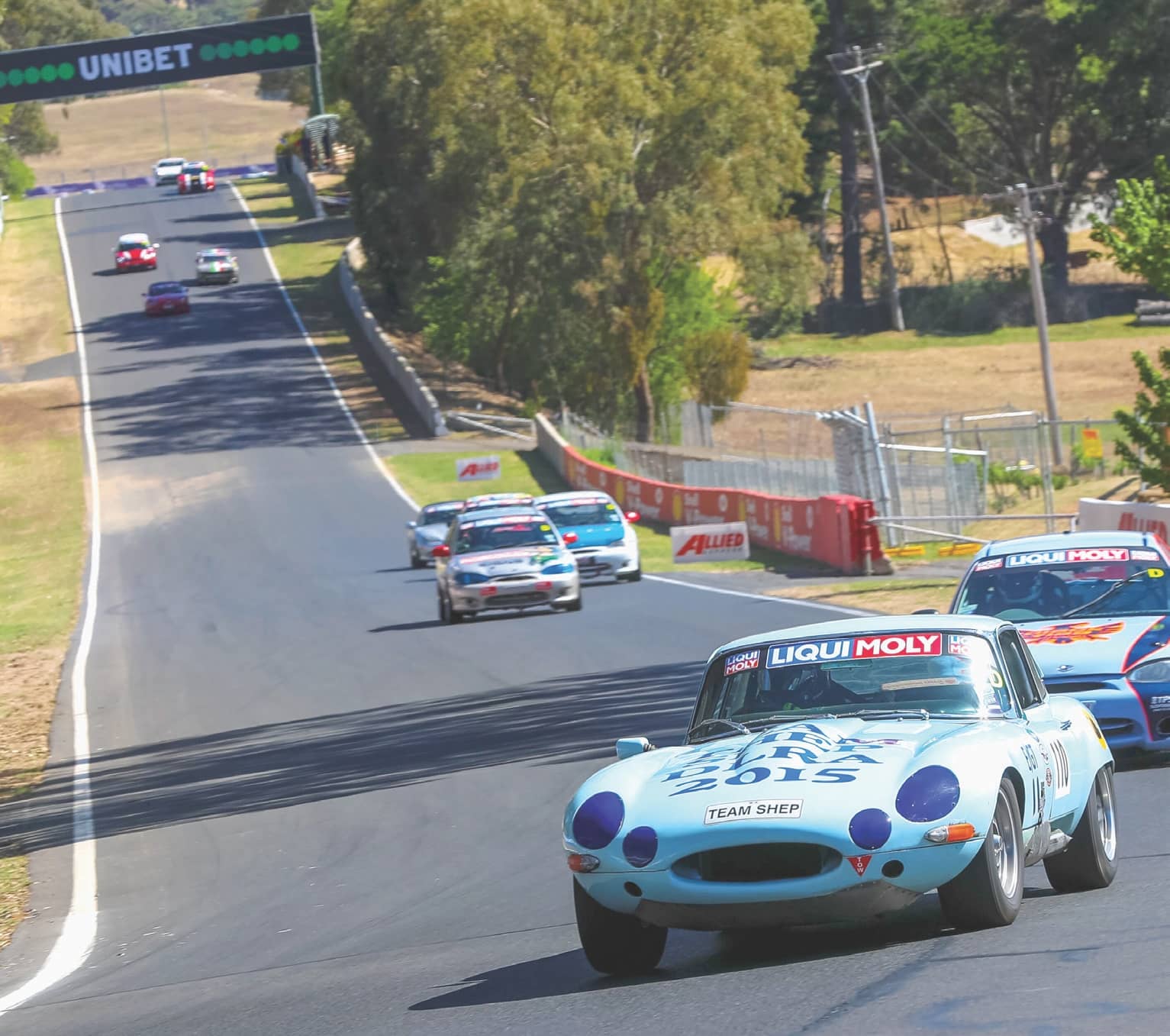 It was thorough, and in addition to normal inspections they wanted to see our windscreen wipers in action. Uncle Boyd assisted me hold them off the screen. The scrutineer was impressed with the triple-blades of an E-Type.

We got our Challenge Bathurst Team bracelets allowing us to go anywhere - matching our own self-produced Team Shep ‘access all areas’ credential passes.

Brad and I got fuel. The nice man supplied us with twenty-five litres for $65. We needed additional supplies including brake fluid and a tyre pressure gauge from the CBD. The car was parked casually for the night because the pit garages were still full of GT cars. Their competition finished next day. 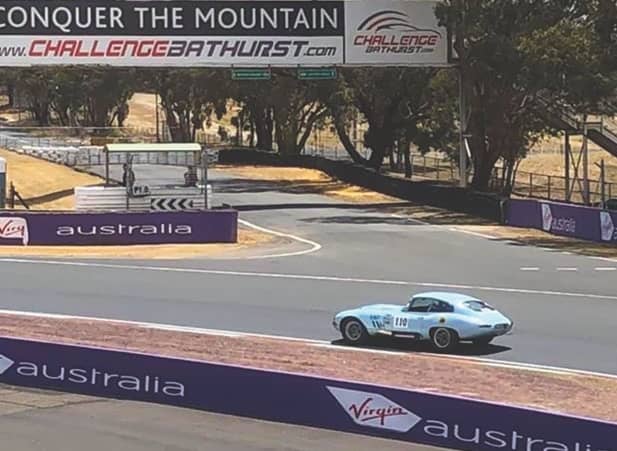 We completed all our tasks needed for competition, so it was a later start, but still got in breakfast at the motel, before going back up the hill for the last day of Super sprints. We also visited the National Motor Racing Museum to ogle over an amazing collection of cars and motorcycles.

We were allotted garage seven, and along with adjoining garage eight, had thirteen Datsun Zs, one Porsche 911, one Hyundai Excel and our E-Type - the oldest car competing. Leslie was straight back into his work, and got the E-Type looking shiny for the next day’s on-track action. 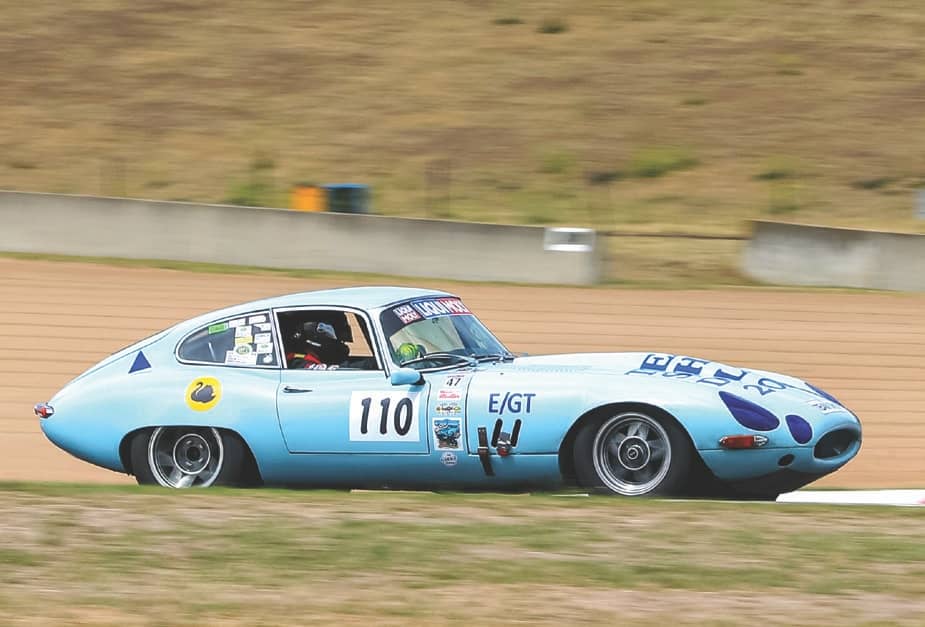