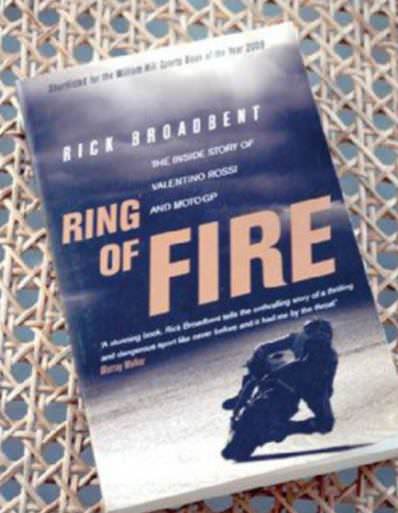 Everything you ever wanted to know about MotoGP racing, written brilliantly. A must read...

Nick Broadbent is a sports writer for The Times, for whom he covers MotoGP, among other things. He has written books on football, boxing, athletics as well as collaborating with motorcycle legend Ron Haslam on his autobiography Rocket Men, also published by Bantam Books.

In Ring of Fire, the first book to cover the whole of the MotoGP era till 2009, Nick Broadbent gives a breathless behind-the-scenes account of the acclaim, heroism, pressures and danger of life at over 300kmph. At its centre is Valentino Rossi. Brilliant, eccentric, ruthless, brave and above all, fast. The Italian megastar who has left motorcycling records trailing in his wake.

Ring Of Fire looks back at the sport’s tradition of romance, reprobates and debauchery, interweaving the story of Rossi’s hero Mike Hailwood, a legend who launched a mesmerising comeback of his own. By turns funny, sad, shocking and uplifting, it brings us face to face like never before, with an extraordinary cast of characters that make up the white knuckle sport.