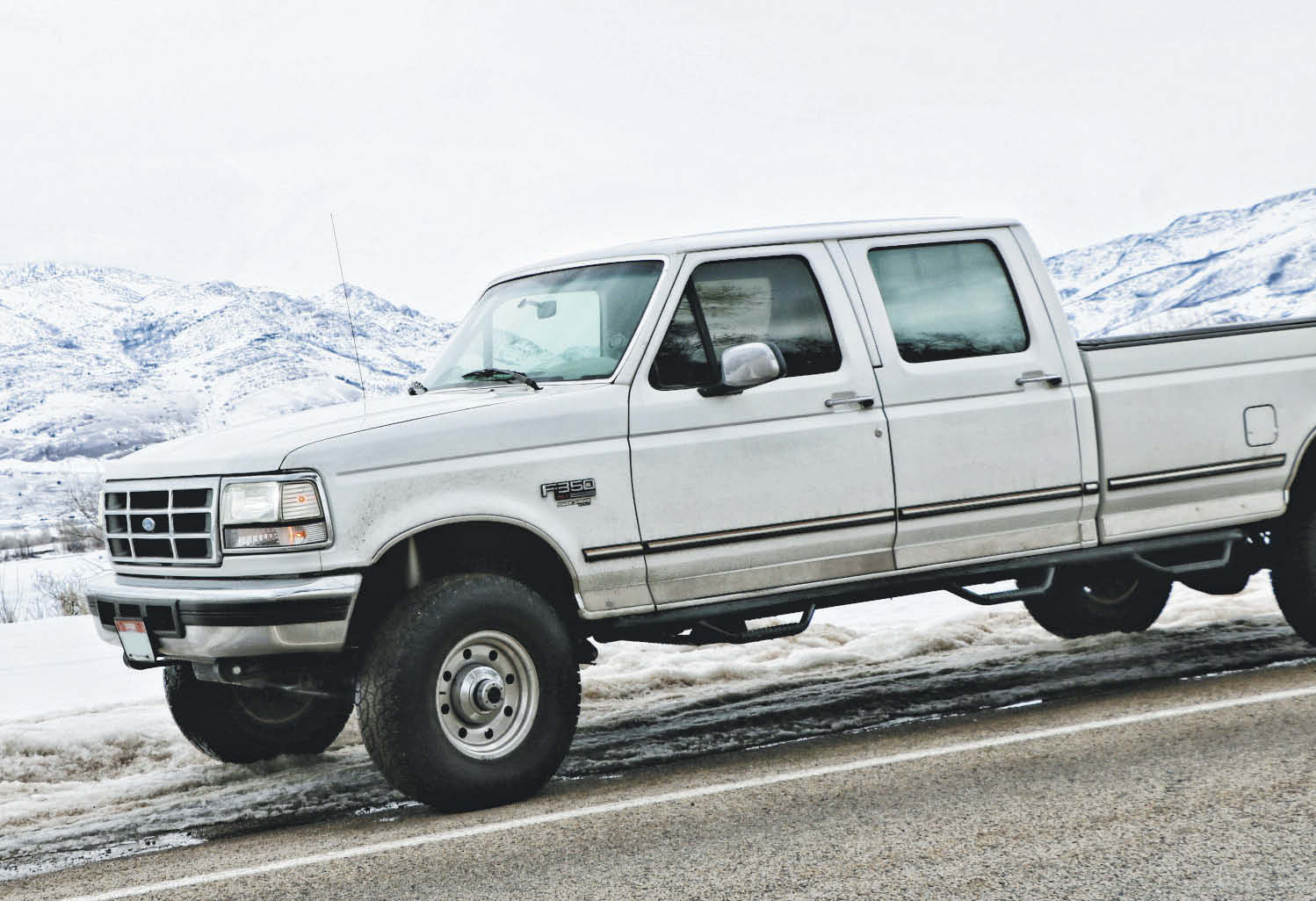 PART SEVEN: TIGHTEN UP THE SHIP

JACOB WHITE
Here we are once again, another installment of upgrades for Project Obsessed, our long term build-up of a 1996 F350 7.3L Power Stroke. In hopes of building our rendition of the perfect Old Body Style Ford we’ve already made significant improvements in this old truck with the most notable being the installation of an intercooler system from Banks Power and the new front suspension swap to a Reverse Shackle kit with Super Duty leaf springs from Sky’s Offroad. Of course, we’ve dialed up the horsepower a bit with a Banks 4” exhaust, S&B cold air intake, and custom tuning from AA Design & Tuning. As it sits, the old girl made a little over 300hp to the tires and does a pretty decent job of towing our fifth wheel around the Wasatch Mountains of Utah. The new front suspension made this quite possibly the best riding leaf spring truck we’ve ever been in, but 23 years and a couple hundred-thousand miles has not been kind to the steering system. With some noticeable play in the wheel and a significant ‘wander’ at freeway speeds, this F350 isn’t quite the ultimate daily driver just yet.

At 230k and what appears to be the original steering gear, it’s understandable that there’d be some slop in the steering wheel. While the factory box does offer some adjustment that could take up some of that play, with its age and mileage, replacing with something new just seemed logical. Redhead Steering Gear of Auburn, WA has been remanufacturing steering gears since 1981 and has learned a thing or two after an estimated 61,000+ rebuilds.

Since most of the original steering gear housings used by Ford didn’t use a bushing or bearing, Redhead increases longevity and improves steering feel by machining a new bore and installing needle bearings. Sector shafts are also checked on a lathe to be sure they’re straight and true and all sealing surfaces are fully polished to eliminate leakage issues. Going through the entire rebuild process with all new seals of course, but they also take things one step further by custom fitting each worm and piston assembly with new precision fit steel balls. As the only steering gear to offer this kind of attention to detail, they can ensure that the most exacting tolerances are assembled into the gearbox and eliminate every bit of play you may feel from an OEM replacement and standard reman box from your local parts house.

With the worn-out steering gear taken care of it was time to investigate the steering linkage where some diagnostics did show some play in the tie rod ends and drag link. We also needed to address an issue with the pitman arm that wasn’t taken care of when the front suspension was overhauled. We purchased this truck from the original owner who had at some point installed an old school leveling kit, that required a drop pitman arm. When we converted to the reverse shackle and Super Duty springs, this brought the stance back down near factory ride height and the drop pitman threw off some of the geometry in the steering and created some bump steer issues.

To resolve all of this, we could’ve just replaced the rod ends with new factory pieces and installed a stock pitman arm. But being over 20-year-old technology, there are some better rod end designs available today that can not only last longer but be less expensive to replace. Carrick Customs of Bend OR is a small fabrication shop that specializes in some of this old body style Ford stuff and offers a complete heavy-duty Dana 60 steering linkage system that can improve steering feel and longevity at the same time. Built from 1.5” x.188 DOM tubing, their tie-rod bar and draglink are stronger than OEM parts and will remove any flex in the system and better handle a big heavy set of tires or off-road abuse. Using state of the art Synergy Mfg. metal on metal heavy duty tie rods, the low misalignment boots help to eliminate the dead spot feeling in your steering wheel as you put in that initial input from the wheel.