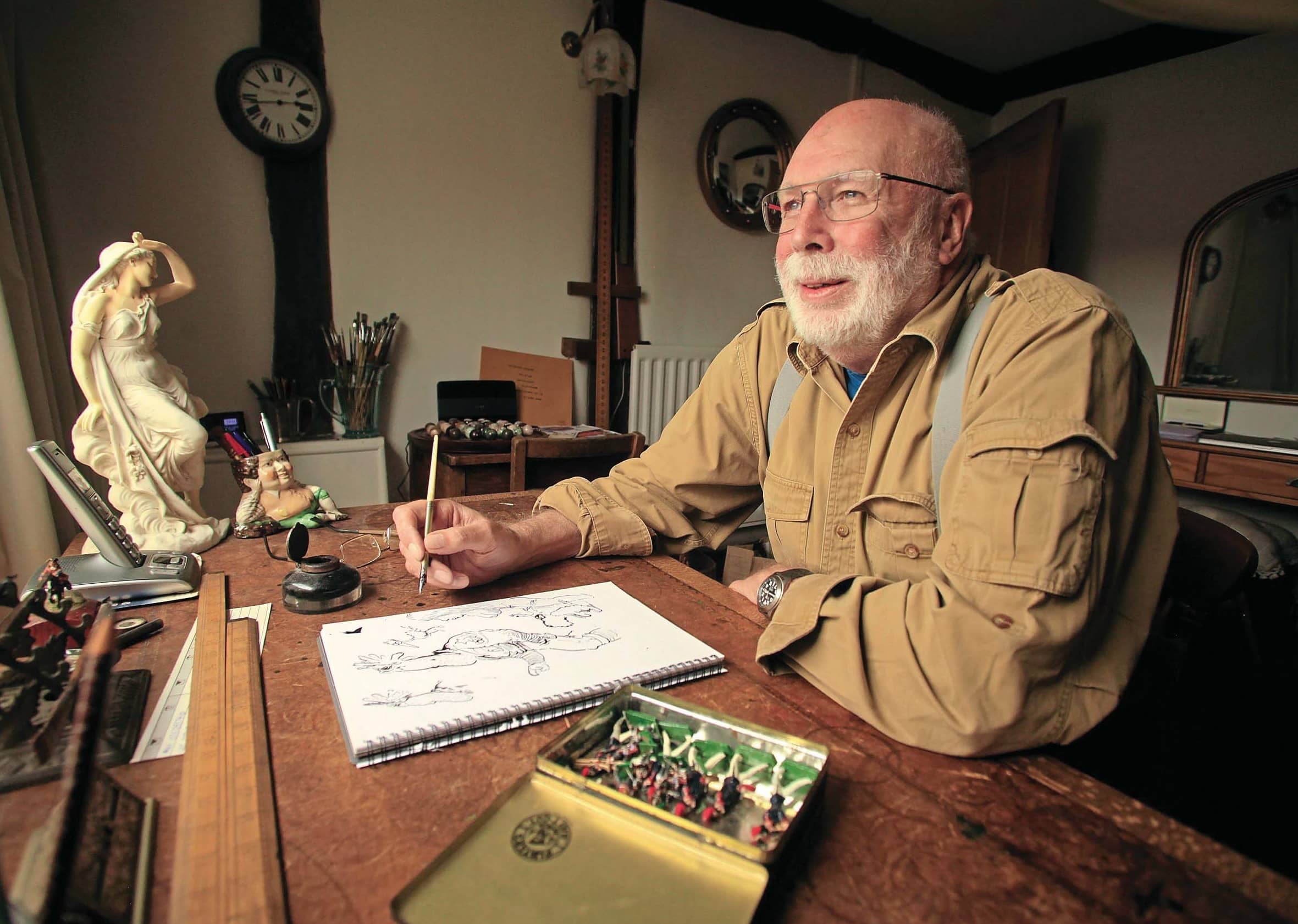 If you’re a proper biker of a certain age, you will have heard of Ogri, the comic book hero who appeared in Bike Magazine, Back Street Heroes and even the Daily Telegraph. Let’s delve into his history and meet the man behind him.

This is the man responsible: do we see a hintof remorse? No. We see a sense of peace; contentment, even. Paul Sample may be retired, but this is still a man ‘having a bit of a think’. A man also observing the world as it passes outside his window, while he absorbs every facet of human character, all of which can be used, processed, ready as the next little figure about to spring from that hovering, ever-ready, well-kept pen.

Paul Sample has no regrets over an impressive career and a ‘job well done’. He’s not just been the father of Ogri, but his work has been seen on the cover of Tom Sharpe novels, on a Black Sabbath album cover, in (ahem) Men Only and countless newspapers across the land. But Ogri is his best-loved creation and one that has appeared in more than just magazines and the Daily Torygraph. Oh no, our most beloved biker has appeared on cups, plates, birthday cards, a board game and even on our television screens…

But what of Paul himself: clearly it’s a background in bikes that inspired his finest creation? Speaking to Bike magazine back in 1997 he said: “My first bike was a Sunbeam S7 D Luxe and I’ve still got it. I had a bit of a love/hate relationship with it – it’s been in bits for about 20 years, I crashed it on the way home from Hackney Speedway one night when it was raining.” My, what would have Ogri himself said? You’ll be pleased to learn that Paul still has that Sunbeam and a garage full of bikes, all of which go round the block in their turn. Alongside the S7 he has an Indian Enfield 500 Bullet, the 2006 Bonnie and a lovely 2014 Thruxton.

So how did Ogri flow from Paul’s vintage nib? Well, vintage nibs… as Paul reckons he gets through a fresh nib roughly every couple of weeks. The dip pen and ink was what he used when learning to write at school, and the best are nibs from Birmingham firms William Mitchell and Leonardt, and he uses cheap and cheerful Quink, if you’d like to know…

For creation you need inspiration and that keen eye for the world around him immediately dumps the information into his brain, which is like an oldfashioned Rolodex, or as Paul says: “Like a picnic basket of cress sandwiches.” Anecdotes from friends are all logged, with tiny random incidents in the street and personal experiences similarly noted. His sketchbooks are full, but his brain is even fuller, and in the pages of his sketchbooks the material recorded is generally more about nailing down the details than inching towards the seminal idea.