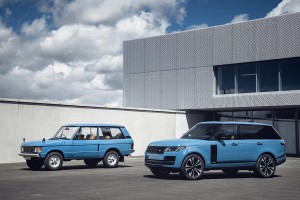 When it comes to 4×4 SUVs, it is the Range Rover that defined the segment way back in the 1970s. Its iconic shape continues to be the inspiration behind the entire Range Rover line-up of SUVs with that classic sheet metal to glasshouse ratio consistently maintained over the decades. Over the years, the Range Rover has earned itself a cult status is a product that is definitely worth celebrating.

Over its 50-year lifespan, the Range Rover has achieved many world firsts and completed numerous impressive feats. It was the first SUV to feature a permanent 4WD system when it was launched, and in 1989 was the world’s first 4×4 to be fitted with ABS anti-lock brakes. Later in 1992 it became the world’s first 4×4 to be fitted with electronic traction control (ETC) and automatic electronic air suspension – ensuring the refined driving feel Range Rover is so famous for, both on and off-road. In 2012, the latest generation Range Rover became the world’s first SUV to feature an all-aluminium lightweight construction, making it lighter, stronger and more efficient. It was the first vehicle to ever be displayed at the Louvre Museum in Paris, and has even won the Paris-Dakar rally – twice. No other vehicle combines the levels of luxury, comfort and sophistication with off-road capability and on-road performance like Range Rover.

In its golden anniversary year, the Range Rover has definitely built upon its heritage and has aged extremely gracefully to remain one of the most sought-after luxury vehicles across the globe. Celebrating this with the limited-run Range Rover Fifty, only 1970 units will be made available for collectors to get their hands on. The number obviously points back to when the journey for Range Rover all began.

Using the Autobiography edition as the base, the Range Rover Fifty will be available in both standard and long wheelbase body designs. The vehicle will be offered in four curated colours that include Carpathian Grey, Rosello Red, Aruba and Santorini Black. The car also gets bespoke exterior accents in Auric Atlas. The SUV also gets a unique ‘Fifty’ badge. Incidentally the Special Vehicle Operations department of Land Rover is also offering the Range Rover Fifty in one of three heritage colours including Tuscan Blue, Bahama Gold and Davos White.

Customers can select from a number of powertrain options that include petrol, diesel and even the plug-in hybrid P400e version. It goes without saying that they will not be left wanting in the performance department for all the engine choices are touted to deliver both in terms of performance as well as efficiency.

With the Range Rover Fifty, not only do you get a limited-edition luxury SUV, but you also get to own a piece of Land Rover history as this product is destined to remain an icon.