Sattari mamlatdar appeals to people in taluka to get vaccinated
Navhind times|June 10, 2021 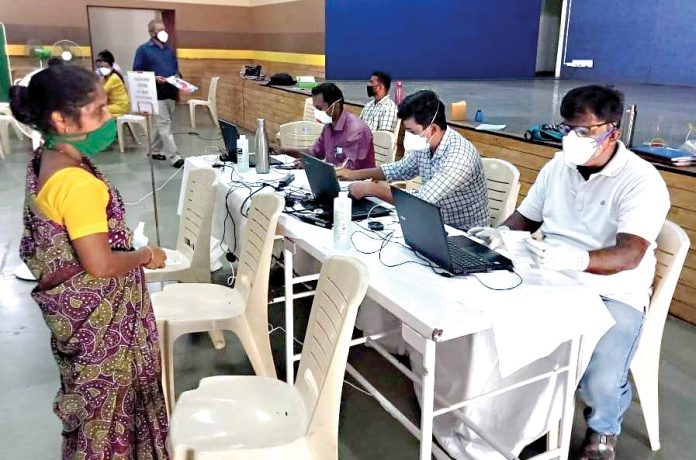 The vaccination figures are less in rural areas as compared to urban areas and since the vaccination is started for priority groups we are hopeful of a positive response said Sattari mamlatdar Dasharath Gawas.

Gawas also appealed to people to get vaccinated as government machinery is enforced to achieve the target of 100% vaccination and to flatten the curve. He further said that instructions have been given to the health department and women and child department of Sattari to disseminate information and awareness about the vaccine to lactating mothers and other priority groups through Anganwadi sevika in their respective localities.

Appealing to people to get vaccinated, health officer, Community Health Centre (CHC), Valpoi, Dr Sham Kankonkar said, till date the number of people vaccinated under CHC stood at around 14,000 of which also include the second dose of vaccination.

“We appeal to school heads to urge parents to take the vaccination and to get the Aadhaar card and birth certificates of their children and get vaccinated at our centre” said Dr Kankonkar to the heads of school in a meeting of the task force led by Sattari Mamlatdar Dashrath Gawas which was held recently at the Valpoi Municipal premises.

The rate of vaccination is low; and hesitancy has been discussed extensively in meetings of the task force. Though the population of Sattari is around 50,000 which the health department needs to target in their vaccination drive it appears that the rural population is not so enthusiastic about getting them vaccinated for the disease.

“We have started vaccination for priority groups like Divyangs (person with disability), lactating mothers, parents of children whose age is 2 years or less, persons with co-morbidity, auto-rickshaw driver, motorcycle pilots, taxi drivers and seafarers at centres-KTC Community hall and Valpoi Municipal hall” informed Dr Sham Kankonkar.    Meanwhile, he said 45 years and above beneficiaries was advised to get inoculated at routine vaccination centres.

In addition to the rural population, those living in Valpoi are also a little hesitant in getting the jab. While youth seem to be more proactive in villages but due to no transport facilities hardly a few turn up to the centres.

“Rural vaccine hesitancy exists and poor public transport in villages is a major issue which led to poor turnout to the vaccination in rural areas.  Besides, vaccines lead to fever, which hampers those who depend on daily wage” said an official who is deputed for vaccination duty.  Some people, he said, also believe that they simply do not need vaccination. All of this is making it harder for authorities to convince people.