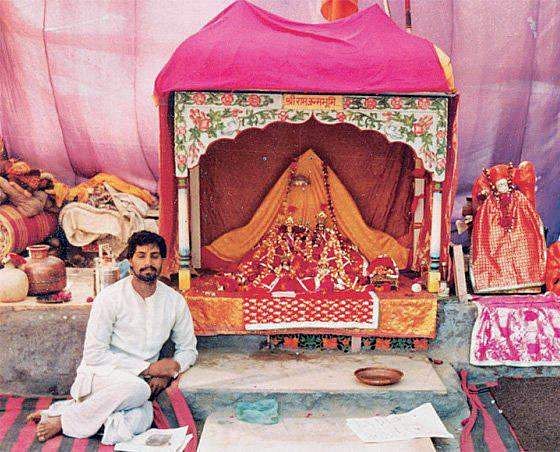 LUCKNOW: Taking a break from combating the deadly coronavirus, Uttar Pradesh Chief Minister Yogi Adityanath attended a ceremony to shift the Ram Lalla (Lord Ram) from the makeshift tent temple to a temporary pre-fabricated temple on the Ram Janmabhoomi premises in the wee hours on Wednesday.

The ceremony took place at around 4.30 am on Wednesday, on the first day of the nine-day Chaitra Navratri festival which also marks the Sanatan Nav Varsh (new year). The new abode of Shri Ram is a fibre made bullet proof temple and it has been cast with in a period of 15 days on Ram Janmabhoomi premises. The deity has been shifted from the sanctum sanctorum of the makeshift temple to be
enthroned on a pure silver throne weighing 9 kg.

The ‘silver seat’ on which the deity is placed has been donated by Raja Bimalendra Mohan Prakash Mishra, one of the trustees of Shree Ram Teerth Kshetra Turst and scion of the Ayodhya royal family.

Twenty-seven years after the demolition of the Babri mosque, the Ram Lalla, the presiding deity of the Ram Janmabhoomi, was shifted from the sanctum sanctorum of the temple to his temporary abode. On the occasion, members of the Sri Ram Janmabhoomi Tirath Kshetra Trust were also present.

UP CM Yogi Adityanath led the ceremony along with a group of priests who had converged in the temple town from Andhra Pradesh, New Delhi, Haridwar, Mathura, Varanasi and Ayodhya to help shift the idols amid chanting of mantras and other vedic rituals.

The deity was shifted in a palanquin from the makeshift temple at a pre-decided muhurat. The chief minister was among four people who carried the palanquin to the new location which is a few metres from the existing makeshift temple.

However, currently, there is a ban on darshan in the wake of the coronavirus outbreak.