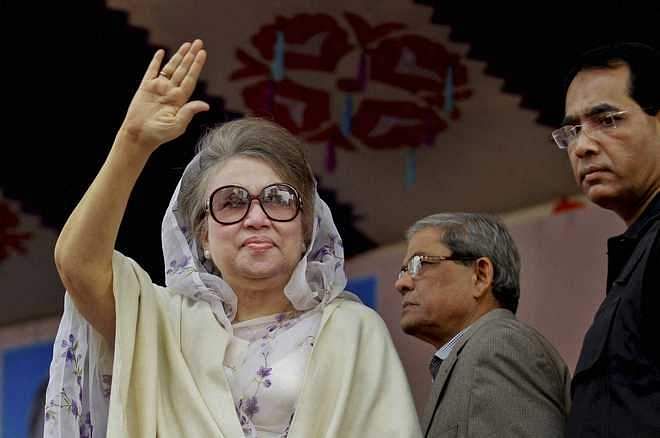 DHAKA: Bangladesh on Wednesday released jailed former prime minister and main opposition leader Khaleda Zia for six months on condition that she would stay at home, amid the coronavirus outbreak in the country.

Wearing a mask and clad in a black saree, Zia came out of the jail in a wheelchair. She was flanked by her supporters and party workers. She rode a car to her home in Dhaka's posh Gulshan colony.

Earlier, Kamal said required procedures were completed for her release for six months under her younger brother Shamim Iskandar's custody on two conditions requiring her to stay at her residence during the period and she could not leave the country.

Kamal said Zia would not be able to take part in any political activity during the period.

On Tuesday, Law Minister Anisul Huq said the BNP chief the decision to free Zia was taken in line with Prime Minister Hasina's directives and considering the age of the former prime minister.

"Zia will be released for a period of six months and she must stay in her own house," the minister said.

Senior party leaders including BNP's secretary general Mirza Fakhrul Islam Alamgir and others were seen struggling to keep away the party activists in view of the COVID-19 outbreak, saying the social distancing was crucial for their 74-year-old ailing leader.

Kamal said Hasina decided to free her for six months as Zia's brother Eskandar and sister Selima Rahman recently met the premier with an appeal for the BNP leader's release.

Zia served thrice as the premier since 1991. Her party suffered a miserable defeat in the 2018 elections bagging only six seats in 300-seat parliament.

Her conviction on "moral turpitude" charges debarred her from contesting the polls.

She was sent to jail in February 2018 by a local court on charges of embezzling foreign donations meant for an orphanage, named after her slain husband and president Ziaur Rehman, during her premiership between 2001 and 2006.

Rehman, a military ruler-turned-politician, was the founder of the BNP.

She was convicted in another corruption case later the same year, though her party claims both cases are politically motivated.