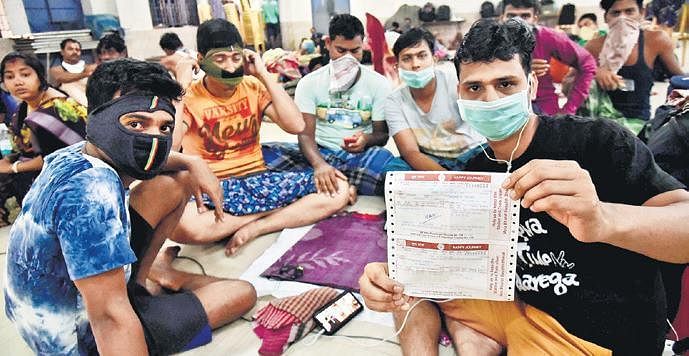 NEW DELHI: Waging a desperate battle for survival, they are the invisible millions who eke out a precarious living as construction workers, painters, food vendors and a host of other jobs suddenly rendered redundant in these COVID-19 days.

As India grinds to a halt with a three-week nationwide lockdown in place to curtail the spread of the coronavirus, the unorganised working force on the margins of society might be the worst hit with no savings and therefore completely dependent on what they earn each day.

According to official data, there are 42 crore (420 million) people in the unorganised sector, including agricultural labourers, spread out across the sprawl that is India.

Some are migrant workers, stuck in distant corners with no transport to take them back to their villages, others are scrounging to make ends meet with no money coming in.

And all are getting increasingly frantic on how they and their families will manage in the days and weeks to come.

The stories are many varied and yet the same, of hopes for the future dimming and dreams of prosperity receding into the unseen distance.

The bright lights of a big city had beckoned Bhupesh Kumar, a 22-year-old daily wage labourer from Bihar's Begusarai district who is now stuck in Delhi, unable to either go back home or earn a livelihood here.

"I was doing my graduation but had to come to Delhi about five months ago because my family was very poor. I was learning plastering. I have barely earned anything., he said.

Anjani Mishra, a contractor who takes on whitewash and paint jobs, has asked the five people who work for him to to return home.

I am from Raxaul in Bihar and want to go back. But all buses and train services have been cancelled. I asked many taxi drivers to drop me to my hometown, but they are refusing as the police has sealed borders along the national capital."  His story finds echo in far away Kolkata.

Manoj Barik, a construction worker the West Bengal capital, lost his job this week after the company suspended all services.

His earnings of Rs 300 a day was meagre but he somehow managed to feed his family of five, including three children.

But not anymore. We have been asked to go back. But right now bus and train services are suspended.

The contractor has stopped paying us, he said despairingly, eager to get back to his village in East Midnapore district.

West Bengal Chief Minister Mamata Banerjee on Tuesday evening announced Rs 1,000 under which labourers in the unorganised sector will get a one-time payment of Rs 1,000.

That might not be enough to see Barik and others through this crisis.

According to state government sources, Bengal has an unorganised workforce of around 90 lakh, including hawkers, rickshaw pullers, bus drivers and tea garden workers.

In Uttar Pradesh, too, the government has said around 35 lakh labourers in the state will get Rs 1,000 each as financial aid while free ration for one month will be provided to 1.

Stuck without food and also shelter in many cases, the worries of daily wage workers on how they will feed their families are spiralling.

Most of those working in bigger cities hail from villages and said they are desperate to return because food will at least not be a problem.

'There is no work and whatever little we have saved will soon dry up if the situation continues.

It is not just the disease but also about food,” said Raju, a resident of Bahraich who takes up whitewashing jobs in Lucknow.

"Some of my relatives who ran fruit juice kiosks have closed their outlets and are sitting at home.

There is no raw material and no customers either,” he added.

Back home in his village, he said, food will not be a problem because they won't have to buy it from the market.

A vegetable seller in Haryana's Rohtak town said his daily earnings have already been halved.

“People are uncertain about about the future.

Customers are buying less because they don't know how long this will last and they need to save money,” he said.

The Haryana government earlier this week announced a package of Rs 1,200 crore per month to help below poverty line and low income group like labourers, street vendors and construction workers.

Everyday, I have to go out for work to earn something.

But with restrictions on movement of people in place, how will I manage?” asked Suresh, a construction worker in Mohali in neighbouring Punjab.

Ramdin, who belongs to Uttar Pradesh, added that he would earn Rs 8,000 to Rs 10,000 a month working at different construction sites.

But that has dried up.

"I have to look after my wife and two children.

All of a sudden there is no work," he said.

Autorickshaw driver Amarjeet in Panchkula Amarjeet said he is the sole bread winner of his family.

“Sitting at home without work and having to support a family is not easy.

This virus has devastated lives and one can only pray that these difficult times get over soon.

The tales of livelihoods lost and lives in peril are heard everywhere.

In southern Tamil Nadu, like in other states, thousands of migrant workers are stranded, relying on their meagre savings or reduced to borrowing from others to make ends meet.

Chennai Corporation officials said they have housed over 1,000 migrant workers.

But that is just not enough to cover them all.

A food vendor who sells puffed rice on the roadside said he is at his wits' end.

“We have to earn everyday to meet our daily needs and to buy things to prepare the next day snack.

It is a cycle.

The lockdown is a nightmare, he said.

"Inkenni rojulu ila pasthulu undalo teliyatam ledu (We don't for how long we have to suffer this),” lamented Swami Naidu, a daily wage labourer in Andhra Pradesh's Vijayawada.

The state government has promised Rs 1,000 per family for the likes of Naidu but that money will come only after April 4.

In Kerala, Beena Baburaj, a CITU leader in Ernakulam district, said about 14 lakh people seeking jobs under MGNREGA scheme are in a dire condition due to the lockdown.

"Being jobless is very painful particularly at time of such difficulties.

We don't see a silver lining of hope ahead,” said Doly, 52, an MGNREGA worker in the state In Hyderabad, too, all construction worker has been stopped and all workers confined to their camps.

And in Puducherry, 55-year-old Elumalai who makes a living ferrying goods on his tricycle said he has been rendered jobless and penniless.

Chief Minister V Narayanasamy had announced the setting up of a separate fund to which he and his ministerial colleagues would contribute their one month's salary.