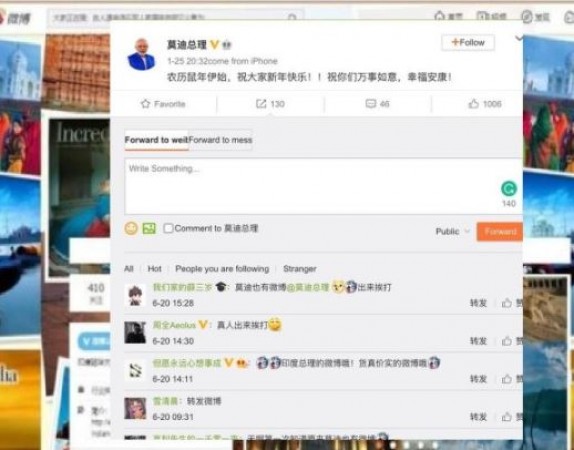 On Monday, China's social media platform Weibo was also on the list, as announced the ban on China's 59 apps. Prime Minister Narendra Modi is also on Weibo. He has a verified account and has close to two and a half million followers. PM Modi opened his account on Weibo in the year 2015. The PMO's Twitter handle was also given. India has banned apps with many social media platforms like TikTok, Helo, but of these, PM Narendra Modi and Government of India on Weibo. It has also been active. Now when India banned these apps, it is being asked that PM Modi will delete his account. Since the ban on Chinese apps, people have been posting angry emojis on PM Modi's account on Weibo. On 25 January, China celebrated its new year.

On this date, PM Modi greeted Chinese citizens for the new year. The DP has been removed from PM Modi's profile since the Chinese app was banned, currently, the account of the Indian Embassy in China is still visible. Followers are visible. Chinese consumers are posting angry emoji on PM Modi's last post. Many people are writing this information on Twitter. A user has written, "Since the announcement of the ban on Chinese app of India, Chinese people are making angry comments on PM Modi's account. PM Modi's last post was on Lunar New Year."

A parody account called Netaji Tweets wrote, "To my knowledge, only one Indian had an account on Weibo and that is PM Modi." In addition to this, the account of some ministries including MY.GOV i.e. Government of India on TikTok, Helo. Although these accounts have not been seen active for the past few days, Tiktok also donated Rs 30 crore to the PM Cares Fund in April. Social media is said to have a very important role in Narendra Modi's victory in the 2014 election with a huge majority, but on social platforms like Weibo, Indians are negligible. PM Modi has an official account on Facebook, Twitter, Instagram, and YouTube and also gives important information on all of them. PM Modi is followed by crores of people on social media. On Twitter, PM Modi is followed by 5.9 crores, Facebook has 4.5 crores, Instagram has 4.3 crores people.

These Indian apps are luxurious and safe from China's app