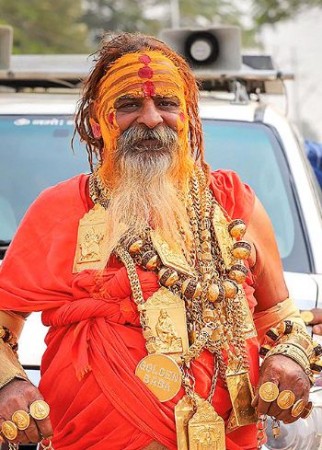 Sudhir Kumar Makkar loved to wear gold since 1972. Golden Baba wore gold jewelry worth crores of rupees, due to which he always remained in the church. He used to go out to Kawand Yatra every year wearing many kilos of gold and luxury cars. According to people living in the Gandhinagar area of Delhi, he was a tailor by profession but he had a clothing business in Gandhinagar. He did not like the clothing business that much. Sudhir left this job and go to Haridwar to start selling flowers and clothes but in a few days, he stopped this work. He ventured into the property business. After earning a lot of money in this business, he stopped this work in the year 2013-14. Sudhir Kumar Makkar has made his ashram in Ashok Gali, Gandhinagar, Delhi. It is also said that in the year 2013, he became Golden Baba from Sudhir Makkar.

Golden Baba used to wear a gold ring in ten fingers of his ten, armlets made of gold in arms, a gold chain around his neck, and the lockets of many deities. 25 to 30 guards were always deployed for the protection of Golden Baba.

Man murdered wife after seeing her in objectionable condition with lover