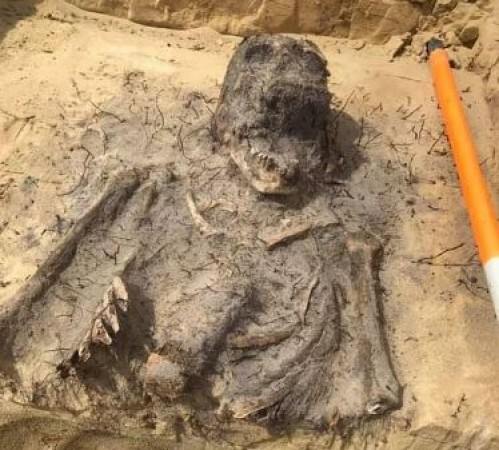 Excavations were being done for road construction in Poland. While doing this excavation, something like this happened, people were shocked by seeing this. In the excavation being done to build the road, suddenly instead of soil and stones, one male skeleton came out. 115 skeletons have been found in this excavation, not one, but two. However, these skeletons are said to be more than 500 years old.

The place where road construction is going on is a wooded area. An ancient 16th-century cemetery has been found here. This place is part of an important road project, which extends from Greece to Lithuania. After this, the cemetery has now been removed for road construction. The remains found in this cemetery consisted of at least 70 percent of skeletal children. All these remains belong to the 16th century. The most special thing in these skeletons was to see that coins were placed in everyone's mouth. Experts say that coins will be kept in the mouths of people who died in the 16th century. Because at that time there was a belief that these coins could be used as payment to bring the soul of dead people across the river dividing the world.

According to the information received, the General Director of National Roads and Motorways has stated that there are a total of 115 skeletons and 'On the basis of archaeological observations, we can conclude that 70 to 80 per cent of all the skeletons released are of children. 'Many people also believed that this could be a collective grave. However, based on written accounts and legends of the cemetery, no evidence of a mass grave has been found.

Rahul Munjariya Aspires to Reach at the Zenith in Music Composition