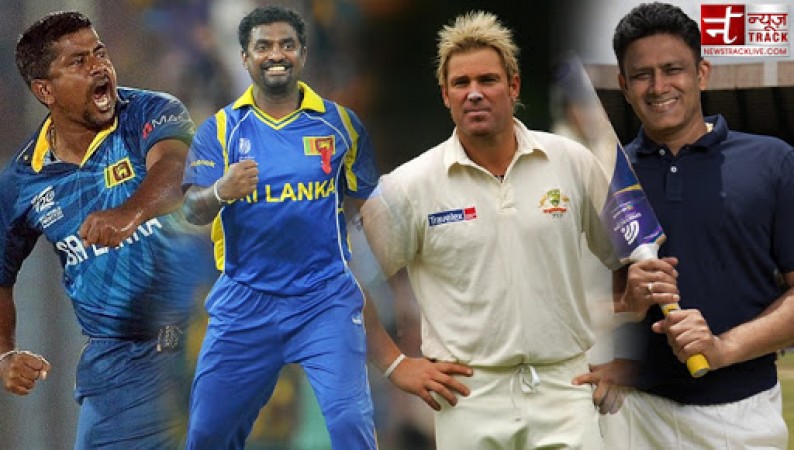 It is not a simple task for any bowler to take 5 wickets in an innings. This in itself is a big achievement, which is seen by connecting with the success of any bowler. However, there have been a few bowlers who have done this feat again and again, so today we are going to tell you in this special offer about those selected bowlers, who have set this record by taking 5 wickets in an innings in Test cricket.

Muttiah Muralitharan: Muttiah Muralitharan, the greatest bowler of Sri Lankan team who has troubled a lot to batsmen taken the most wickets in Test cricket. He participated in 133 Test matches in his 18 year long career in which he recorded 800 wickets in his name. When Murali appeared with the ball on the field, the batsmen of the front team felt that he should go somewhere and hide. Every batsman in the world used to dance to the tune of Murali's bowling. Muralitharan has made 67 in Test cricket by taking 5 wickets in an innings and has made it to number one in this list, along with 22 wickets in 22 matches.

Shane Warne: Leg spin spinner Shane Warne had a magic spell on his wrist. The biggest batsmen used to kneel in front of their spinning balls. It is said that ordinary bowlers do not have 6 different balls to bowl in an over, but Warne's bowling quiver had 23 different types of balls, including googly, flipper, top spinner, etc. Shane Warne took 708 wickets in 145 Tests and took 5 wickets in 37 innings. Additionally, Warne took 10 wickets in the match 10 times.

Anil Kumble: Team India's most successful bowler Anil Kumble will always be remembered for his passion in the history of cricket. Kumble won the Indian team in how many matches in his 18-year-long career. Kumble used to beat the batsman of the front team with his wonderful bowling. Anil Kumble played 132 Tests in his career, in which he took 5 wickets in 35 innings. Not only this, Kumble has a record of taking 10 wickets in the innings and he is the second bowler in the world to do so. Before Kumble, Jim Laker of England had done this feat.

Richard Hadley: The only fast bowler named in this list is former New Zealand all-rounder Richard Hadley. In his era, that is, in the 70s and 80s, he always targeted almost every batsman in the cricket world with his speed. Hadley participated in a total of 86 Test matches in his cricket career and took 5 wickets in 36 innings. Let us also tell you here that Hadley has taken 431 wickets in his illustrious career.

Rangana Herath: Sri Lankan left-arm spinner Rangana Herath spent the early part of his career under the shadow of Muttiah Muralitharan. After Murali's retirement from the team, Rangana took the reins of Sri Lanka's bowling. Herath used to deliver the sixes of the batsmen of the front team in almost every match. For this reason, batsmen of every team used to get scared of their bowling. Rangana Herath took 5 wickets in an innings 34 times in 93 Tests in his career. In addition, Herath also took 10 wickets in 9 matches. For your information, let us tell that in the name of this brilliant left-arm spinner of Sri Lanka, 433 wickets are registered in Test cricket.