Bowlers can get in trouble if they use saliva to shine the ball
Newstracklive|June 29, 2020 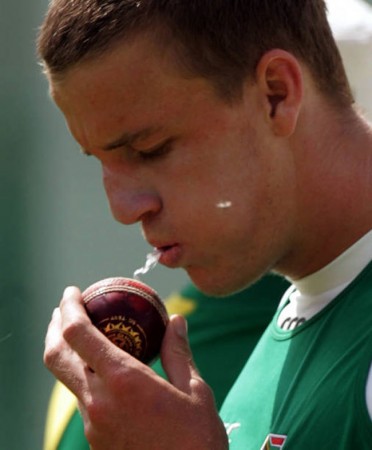 India's fastest bowler Bhuvneshwar Kumar is not happy with the ban on the use of spit to shine the ball. He said that the International Cricket Council (ICC) should bring its option soon. The bowler needs to shine the ball to swing the ball. Earlier, Jasprit Bumrah has also said the same thing. Recently the International Cricket Council (ICC) has banned the use of saliva to shine the ball during the match due to coronavirus. Every team will be warned twice in an innings. In the third time, 5 runs will be added to the account of the team batting as penalty.

Bhuvneshwar said in a webinar, "I hope the ICC will bring an artificial object to shine the ball." You will need it most when bowling in a swing condition like England. Spinners will also need it a lot. ''

: Bumrah said, "The game will change completely because the spit is not used on the ball." The batsmen will get its full benefit. Already, the ground is getting smaller and the wicket is flat. In such a situation, bowlers should get some other option to shine the ball instead of spit so that swing or reverse swing can be found. ''

Bhuvneshwar said, "IPL must be this year. This league is very important both for cricket and financially. "The IPL has been postponed indefinitely due to Corona this year. The tournament was to be held from 29 March. The BCCI is waiting for the ICC's decision on whether the T20 World Cup will be postponed or not. If the World Cup is not held, then the IPL can be held in October-November.

The match should be equal: India's senior fast bowler Ishant Sharma and spinner Yuzvendra Chahal also denied the ban on the use of spit to shine the ball. Ishant said - "If we don't shine the red ball (in a Test match), it won't swing." If swing is not available, it will become much easier for the batsmen to play ball. I believe that the match should be equal, not the entire match in favor of the batsmen.

It would be easier to bat than not having a ball drift:Spinner Yuzvendra Chahal said, "When you use a natural object like spit to shine the ball, it helps the fast bowler to swing and spin the spinners. is. If as a spinner, I will not drift the ball during the match, then it will be very easy for the players to bat.