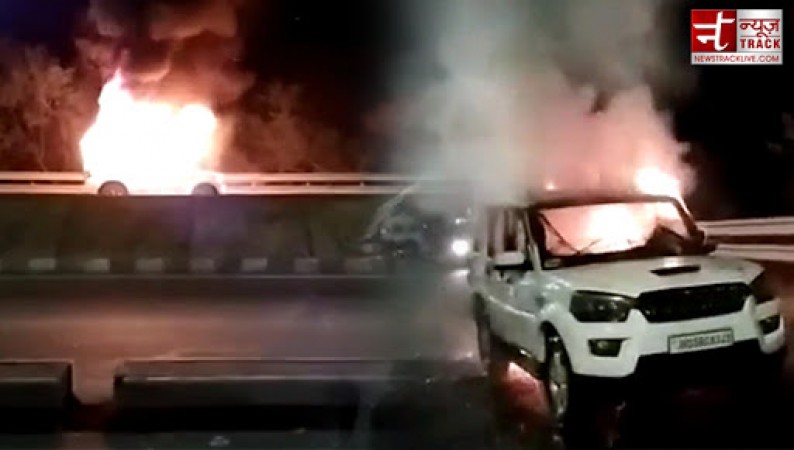 Ranchi: A shocking incident has been heard from the Jamshedpur district of Jharkhand. At 9:30 pm on Tuesday night near the scratch bar located at Marine Drive under Sonari police station, a fire broke out in an instant fire. The fire was so terrible that the car rider could not get out and burned alive there. Local residents tried hard to save him but he failed.

It is also being said that because of the car's central lock not opening at the right time, the car rider got trapped inside and could not get out of the car. Due to which he died on the spot. Until the last moment, the car driver tried to save himself. He also tried to break the glass in front of the car by foot, but all his attempts were unsuccessful. The police reached out with the fire brigade and extinguished the fire of the burning car and broke the door of the car and got out the dead body. After which he was sent for postmortem.

According to the information, the car is from Juddi village of Potka police station and was coming from Ranchi at the time of the incident. Right now the police are trying to research the whole truth. As it has been learned that Arvind Kumar, DSP of HQ-2, says that a report of a fire in a Scorpio car in Marine Drive and burning it to death was reported. It is being verified. The cause of the fire is still unknown.

For first time in Indian history of independence, a woman prisoner will be hanged

Dave Grohl is being inducted into the Rock & Roll Hall of Fame for a second time. He’s got a lot to reflect on.

The FTC’s very young new boss thinks corporations are abusing their power. To fight them, she’s consolidating some clout of her own.

Afghanistan – The Long Road Ahead

The war may be over, but for refugees from the Taliban the battle has just begun

A Trick of the Light

If you buy a machine—be it a smartphone or a combine—you should be able to fix it, right? Big Tech says no. Ordinary Joes say yes. Witness the biggest battle in the right-to repair movement, being fought on farms across America.

The New Truth About Cholesterol

More Me, Now: Is Narcissism On The Rise?

Are we becoming more narcissistic? And is social media behind the seemingly growing me crowd?