Sri Bharati Tirtha, the present Jagadguru of Sringeri Sharada Peetham, a sanyasin of the highest paramahamsa order, is the foremost scholar today of Vedanta and Sastras. His 68th Vardhanti (birthday) was celebrated on 23rd March 2018 at the sacred town Sringeri. His Holiness was born on 11th April 1951 to Smt. Ananthalakshmamma and Sri Venkateshwara Avadhani.

In 1966, a young lad (brahmachari) of 15 years approached Sri Abhinava Vidyatirtha Mahaswamiji, the then Jagadguru of Sringeri, seeking His blessings and instruction in the Sastras. Sitarama Anjaneyaulu (Sri Bharati Tirtha’s poorvashrama name) prostrated before the Jagadguru and sought his tutelage, which was granted immediately. The Jagadguru started the sacred teaching the next day itself and Anjaneyalu soon became a gem of a scholar and a dear disciple of Jagadguru. The meeting happened at Ujjain where Sri Abhinava Vidyathirtha Mahaswamiji was observing Chaturmasya. The young boy accompanied Jagadguru in all His tours. In eight years Anjaneyalu finished the study of Krishna Yajur Veda, Purva and Uttara Mimamsa, Nyaya Sastra and many other treatises and commentaries. 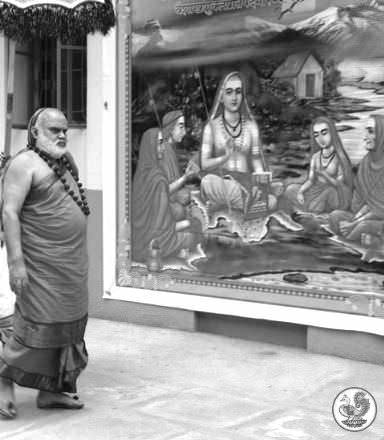