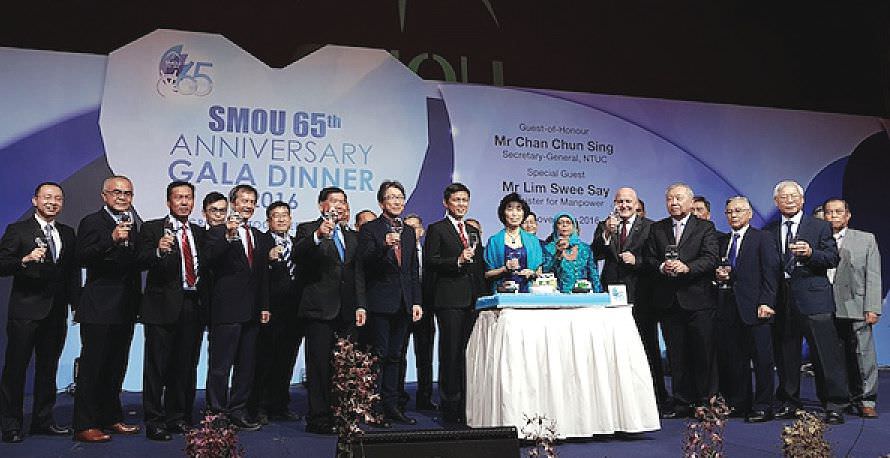 Established in 1951 Singapore Maritime Officers’ Union (SMOU) has grown from a membership base of about 400 in the 1970s to more than 30,000 members. The Union plays a pivotal role in promoting good industrial relations between seafarers (members) and their employers, the ship-owners and shipmanagement companies, and the government through its strong tripartite relationships with the local, regional and international maritime community. It seeks to improve the wages and working conditions of members in the maritime industry through collective agreements with shipping companies which employ them.

Since 1993, SMOU has helped distressed seafarers claim more than US$20 million of unpaid wages. SMOU is an affiliate of NTUC, the International Transport Workers’ Federation (ITF) and Nautilus Federation.

The Union is celebrating its 65th anniversary this year and the gala dinner wraps up the end of its significant milestone with 1,400 guests from the industry, including over 50 overseas guests from Australia, China, France, Germany, Hong Kong, India, Indonesia, Japan, Korea, Norway, Philippines, Sweden, Switzerland, Taiwan, Ukraine, UK, and US.

Singapore is home to more than 5,000 maritime establishments employing over 170,000 people. The maritime industry contributes to 7 per cent of Singapore’s GDP. Last year, Singapore was ranked as the top maritime city in the world, ahead of Hamburg, Oslo, Hong Kong and Shanghai in a report by a Norwegian consulting firm.

Singapore shipping companies that are currently facing a cyclical downturn are getting a helping hand from the Singapore Maritime Officers' in the form of 6,000 subsidised hotel rooms for the next 2 years to lighten their financial load. This Seafarers’ Accommodation Scheme (SAS) will cost the union S$300,000 and aims to help shipping companies provide quality lodging at subsidised rates for their officers.