A Tank For Tomorrow

As we’ve seen in this month’s Armour in Profile, the U.S. Army is currently reorientating its armoured forces towards peer-to-peer confrontation. The return of a ‘Cold War mentality’ and clear tension between NATO and the Russian Federation has seen the return of U.S. heavy armour to Germany, the Baltic States and central Europe. In September 2017, 3rd Armored Brigade Combat Team, 4th Infantry Division deployed to Europe and in the final months of that year up until the end of Combined Resolve X, a multinational field training exercise involving fourteen NATO and partner nations. in May this year, the M1A2s of 3rd ABCT have been engaged in training in Germany and Romania.The exercises have been tough and realistic with the AFVs of 3rd ABCT getting pretty battered over several months in the field. Academy’s latest M1A2 kit, which represents a M1A2 SEP V2 without or without the Tank Urban Survival kit (TUSK), provides a wonderful opportunity to model this latest incarnation of the venerable M1 Abrams MBT.

Academy’s new M1A2 was released in 2016 (ref. 13298) and with a cleverly simple assembly, sharp details and general accuracy may well be the best M1A2 in 1/35 scale. This new kit updates the M1A2 to represent the version currently fielded by the U.S. Army. It contains all the parts necessary to model the earlier SEP V1 and TUSK I versions, but this new release contains a plethora of new features. The kit contains ten sprues of finely moulded dark yellow plastic, a clear sprue, a fret of photoetch, ‘rubber band’ T158 tracks and, perhaps best of all, DEF Model’s superb singlelink T158 tracks which I had used previously with the recent Academy K2 Black Panther. The options to accurately replicate the M1A2s seen in service in eastern and central Europe recently are all included in this box: commander’s and gunner’s gun shields over hatches; a VCU in the turret basket; spare track and jerry can stowage on rear racks; optional thermal ID panels; optional CROWS II system; optional Duke CREW system; optional Blue Force Tracker antennae/module; and optional stowed tow bars. Overall, it’s a great kit. I wanted to add the superb DEF Model’s MCR Mounting Base as seen in some of my reference photos. It’s an absolute gem of resin moulding and certainly gives a different look to the front end of an Abrams. I also used DEF Model’s detail set for the M1A2 SEP (ref. 35015). This is another great set, intended for the initial Academy M1A2 release and contains several parts (such as the alternative antennae) that are in this new kit. Nevertheless, it’s still worth it’s weight in gold as it includes wheel masks, some nice photoetch details, some beautiful resin smoke dischargers with their canvas covers and, most importantly, the anti-reflection coating stickers for the optics. 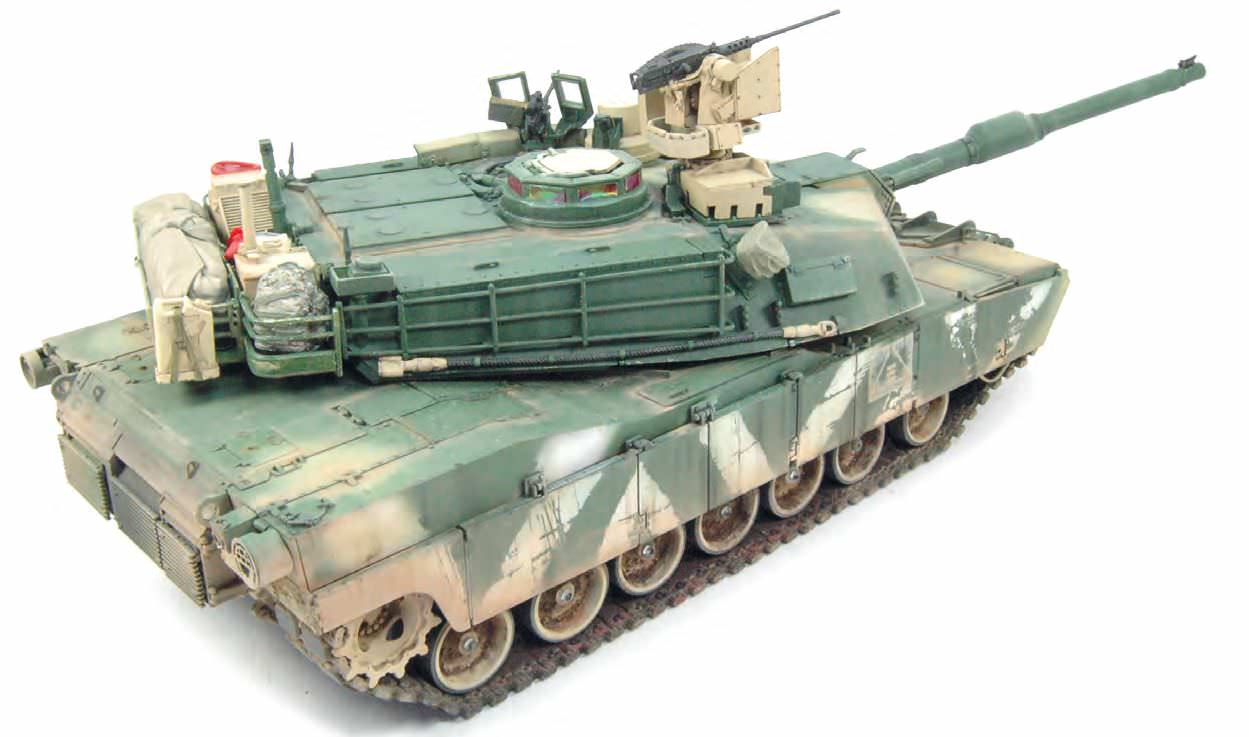