The Modi government ‘dilutes’ article 370 to strip Kashmir of its special status and bifurcates J&K into two union territories. Will it make or break the troubled region?

On the morning of August 5, locals in Jammu and Kashmir woke up to a communications blackout and a curfew. While they were asleep, signal bars on mobile phones vanished and the internet was turned off. In a first in recent years, landlines too were severed. India’s northernmost state, it seemed, had travelled back in time. Thousands of paramilitary personnel, most of whom had been flown in on giant IAF C-17 heavy-lift aircraft in several waves over the past few days, fanned out into the streets to enforce the curfew. Ten days before the 72nd anniversary of India’s midnight ‘Tryst with Destiny’, the stage was being set for another tectonic shift: the ‘dilution’ of Article 370 of the Indian Constitution and the bifurcation of J&K to create two Union territories—Jammu & Kashmir and Ladakh. The passage of the J&K Reorganisation Bill by Parliament on August 6 means India now has 28 states and nine Union territories. It is the first time a state in the country has been turned into a Union territory.

Article 370 was a ‘temporary provision’ included in the Constitution on October 17, 1949. It exempted J&K from the Indian Constitution and permitted the state to draft its own constitution. Its dilution has done away with all of the erstwhile state’s special powers, including that of the state legislature to draft its own laws on all subjects other than communications, defence and foreign affairs. Gone also are J&K’s own constitution, flag and penal code.

The air had been thick with speculation over the preceding days. On August 4, the Amarnath Yatra was abruptly called off and pilgrims and tourists told to leave the Valley. The trigger was said to be the discovery of a terrorist plot to attack the pilgrimage. Journalists were shown a US-made sniper rifle, an IED and hand grenades as evidence of malevolent intent. Firing resumed along the Line of Control (LoC) with Pakistan, with the Indian Army using 155 mm Bofors howitzers—among the rare instances of the use of this heavy calibre along the LoC since the 1999 Kargil war. There was also an encounter, with the army claiming that five men of the Pakistan Border Action Team, or BAT, had been shot dead in the Keran sector. They wanted Pakistan to take the bodies back.

WhatsApp forwards filled the information vacuum—from messages suggesting the possibility of a massive anti-terror operation to one coming close enough by predicting that a trifurcation of the state was on the cards. The government issued ultimatums to tourists to leave Kashmir and policemen visited hotels to ensure they complied. Recalcitrant guests were asked to report to Srinagar airport and some were flown out in IAF transport.

On July 22, US president Donald Trump had stunned New Delhi by claiming Prime Minister Narendra Modi had asked him to mediate in Kashmir. The statement, made in the presence of visiting Pakistan PM Imran Khan, was immediately denied by India’s ministry of external affairs (MEA). The US, New Delhi suspects, was playing the Kashmir card in lieu of Pakistani assistance in getting its troops out of Afghanistan before the US elections in November 2020. There was thus a certain urgency within the government to push the dilution through.

In the Rajya Sabha, the BJP might have been eight seats short of a majority, but the House passed the J&K Reorganisation Bill with a two-thirds majority. The BJP even had the support of hostile political parties such as the AAP, TDP and BSP. Ally JD(U) opposed the bill, but by staging a walkout, it indirectly helped the BJP.

When the decision to scrap J&K’s special status hit the Valley, it was greeted with befuddlement and public anger over the abruptness of the move. Most people, however, were simply confused. “We just have to accept whatever has happened. Time will tell what impact this will have on the people of Kashmir,” Rais Ahmed, a businessman in Srinagar, said.

Within hours of Union home minister Amit Shah’s August 5 speech in Parliament, former chief ministers Mehbooba Mufti and Omar Abdullah, who were under house arrest from the night before, were taken into custody. Muzaffar Ahmad, who runs a shawl business, says the move has brought an end to the politics of Kashmiri leaders. “People are confused right now. There is apprehension; nobody is sure what lies ahead,” he says. The BJP, meanwhile, was in raptures. ‘Ab desh mein ek vidhaan, ek samvidhaan aur ek nishaan (One legislation, one constitution and one flag in the country now)’ ran the slogan in ts party offices.

Soon after the Rajya Sabha passed the J&K Reorganisation Bill, PM Modi walked up to his home minister. Shah bowed reverentially and touched his forehead to the PM’s hand. The PM patted him twice on the back. It was public acknowledgement that Shah was the author of this historic move. 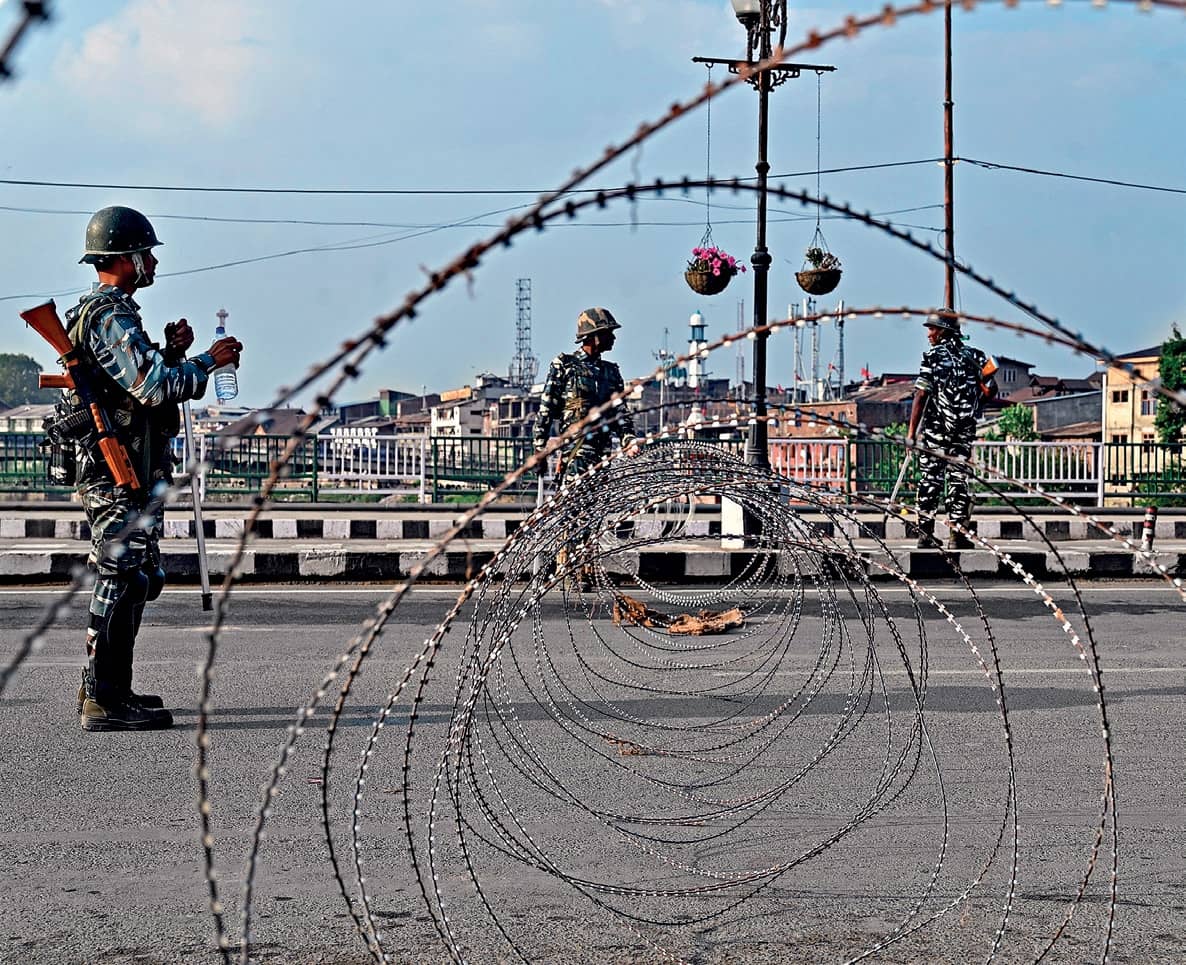 When it came to J&K, Shah was a man with a plan. “The only solution to the J&K problem,’’ he had told India today in 2017, “is removal of [Article] 370. It will be one bitter dose, but it will solve multiple problems in one stroke.” The BJP, he had then predicted, had the will to do it “in future”, conscious that the party was running a coalition government in J&K with the Peoples Democratic Party (PDP), which opposed any such move.

The BJP’s 2015 pact with the PDP to form a government was a halfway house. Shah had already begun studying what he saw as the problems faced by both Kashmiris and non-Kashmiris due to the controversial Article 370. Its abolition is one of the three cornerstones of the RSS’s core political ideology. The other two are a uniform civil code in the country and the construction of a Ram temple in Ayodhya. The BJP has made a beginning on all three issues in the first two months of its second consecutive term at the Centre. Shah, who took over as home minister on May 31, immediately set down to work on Article 370. For him, it was the only way to solve J&K’s problems, be it terrorism or the state’s perceived backwardness. It reportedly took all of Shah’s persuasive abilities to bring on board the two most influential persons in the government—PM Modi and defence minister Rajnath Singh.