I Just Like To Stay Away From Toxic Attention.

This man has been in the eye of the storm too many times. Twinkle Dedhia catches up with the self-confessed controversy king Aditya Pancholi to find out more about where he went wrong in his career, the controversies in his life and his son Sooraj.

How did you become an actor?

I never planned to be an actor. I initially aspired to join the Indian Navy. However, one day, I was travelling in a train with my friends - I was 18 years old then and a gentleman called Mr. Bali approached me in the compartment and asked, “Would you like to become an actor?” I thought the man was playing a prank however, after a while the conversation took a solemn turn. That’s when I curiously asked, “Will I get paid for this opportunity?” He said ‘Yes!’ I forgot about it but in a few days, I got a call from Mr. Bali - he had scheduled a meeting with producer-director Bhappi Soni. Things after that escalated from there eventually in a blink.

At that time, I didn’t own any fancy clothes or shoes so I remember borrowing things from my friends for the audition. And there was Mr. Bhappi with a charming but strong personality. He saw me and declared, “Thik hai! Ab tum humare picture ke hero ho gaye.” He directly handed a cheque of Rs.5,000 to me. I didn’t even have a bank account at that point of time. When I told my parents about it, they were dazed and kept asking me for some confirmation. But my mind was gripped by try karne main kya jata hai. Anyways, I was too young to figure things out or what I wanted to do in life. I thought okay, since I was getting paid, I’ll do it and if I am successful in acting, I would continue.

I had no filmi background or had anyone even closely related to this industry. Gradually, I learnt everything after I was thrown in the midst of it. Initially it was tough because which normal kid knows how to dance, ride a horse, body postures etc. But I learnt at the cost of my producers. So I started as a blank slate which got filled with experiences with each day. 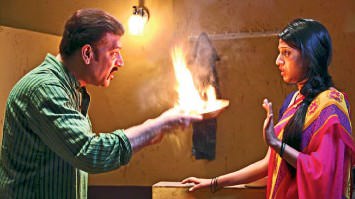 Generally, reel turned real love stories at times fade away with time but we have seen your wife stand by you through thick ‘n’ thin. What is the secret?

I did my first film which was Bhappi Soni’s film where I used my original name Nirmal. After that, I kept going for multiple auditions and tests. Then my next work was with Hiba films owned by Mr. Nari Hira and I got selected amongst so many people who auditioned from this country. And that is where I had my first encounter with Zarina Wahab. Many people thought that the age difference was too big and. predicted that our marriage won’t last. The credit actually goes to my wife Zarina. She understood and forgave me for so many things that I did - and she believed in me as a person. She supported me through thick ‘n’ thin when not many did. Also, whatever I did outside the house, I never brought it home. That is one of the biggest secrets of my marriage!

Zarina has always tried to understand me first as a friend and later, as a soul mate. She has been very forgiving indeed. Our marriage lasted because she was a strong woman who believed thoroughly in this sacred institution of marriage. She didn’t let negative perceptions or judgments shatter us as a couple.

When my daughter Sana was born, I was 23 years old. I had just started working and it was a sudden change to focus on fatherhood along with my career or my bundle of joy. So once I got out of contract with Mr. Hira which was around 10 films in two years, I found that film offers were pouring in. Back then it was a competitive number game about having maximum projects. Amidst all these professional responsibilities, it took a lot of understanding to hold the foundations of a family. I’m grateful to God that our marriage wasn’t lost among the statistics of gossip. But once again I want to give all the credit to my wife.

I don’t regret being married young at all. Today, I sit back and think, ‘Thank God I got married young so I could grow up with my kids. I could deal with their zeal and energy while parenting as well’.

You have been always regarded as a charming actor so what made you switch from lead roles to negative characters?