Who Is The Ass Kicker Of The U.S. Women's National Team?

None other than the relentless Julie Ertz

It’s 10 minutes before practice in the Chicago Red Stars’ training room, and midfielder Julie Ertz is curled up on a massage table, cupping the arches of her feet.

She suctions her skin into a small, pressurized globe, a process that calls to mind medieval torture but allegedly relieves tightness. Her toenails are painted periwinkle blue. A small cross tattoo is tucked behind her ear like a flower.

Ertz winces as she pops the seal of skin, then hops off the table and runs the tender pockets of her feet over a golf ball. She has high arches, a foot shape better suited to ballet than soccer and one that causes her intense discomfort every time she hits the pitch.

“I was 23 in the last World Cup,” the team captain says matter-of-factly. “Now I need to listen to my body more.”

On the floor, various teammates receive their own treatments: icing knees, heating quads, feet submerged in buckets soaking ingrown nails. They chat amiably about the dubious sartorial cred of Uggs, big versus small dogs, new restaurants, Gossip Girl— the free-flowing, unconcerned conversation found in groups with decades of shared history and unambiguous commonalities. Every few minutes, forward Michele Vasconcelos’ toddler, Scarlett, is rolled through the room in a plastic pushcart, a small soccer ball bouncing in the front.

“It was fire,” Ertz shares about the foosball tourney she and a few other players got into last night, noting, “I made Gilly [Arin Wright, née Gilliland] switch positions because she wasn’t defending well enough.” Ertz laughs, says she had no skin in the game beyond “you know, pride.”

Soon, the players hit the field and begin running laps. They shift like a flock of geese, repositioning en mass, pivoting to and fro as if nudged by the wind. During drills, Ertz transforms. She yanks her ponytail tight, walks the turf with a purpose, bowlegged, arms bent and floating at her hips like a cowboy ready to draw. Her expression is serious, contemplative, her genial demeanor subsumed by the beast within.

“I’m the kind of person that wants to take advantage of all my opportunities,” she explains. And for Ertz, practice is as critical an opportunity as any.

Capitalizing on her prospects is something the seasoned defensive champion has been doing since her teens. After a winning stint at Santa Clara University, the NWSL rookie of the year became the second-youngest player on the victorious 2015 World Cup team, a position she slid into after an injured Crystal Dunn was dropped from the roster. Former alternate Ertz seized her moment by the throat, playing every second of the tournament, emerging as a star.

In 2017, she was named U.S. Soccer Female Player of the Year, and she is now viewed by many as the most critical component in the projected success of the 2019 national team—the strategic linchpin and a player head coach Jill Ellis describes as “a weapon” who “will run through anything.”

Like the Kool-Aid Man, Ertz has a reputation for furiously demolishing barriers with a smile. On the outside, she is all warm, sunny blond; on the inside, it’s Game of Thrones, mother of dragons. She has etched her place in soccer history as a rare amalgamation of physical and technical threat, the uncommon defender who dissects film and tackles audaciously, her body as ruthless as her brain.

“Julie is incredibly intelligent about the game,” Chicago head coach Rory Dames says. “She’s like having another coach on the field.”

Dames drafted Ertz to the Red Stars five years ago, in large part because of her brute chutzpah. “Julie puts her body on the line. It’s unusual to have a player that has all the characteristics that Julie has and still have her willingness to tackle,” he marvels, adding, “There is no gray area for her.”

Teammates describe Ertz as a player who thrives under pressure, joyfully running headlong into the mouth of every cannon.

“Julie is probably one of the more aggressive players that we have,” says keeper Alyssa Naeher, who plays alongside Ertz on the USWNT and the Red Stars. “She’s the one that’s going to the ground. Which is weird because off the field, you don’t see that side.”

Out of uniform, Ertz, 27, is chill, open, thoughtful. She makes a lot of deep eye contact. She keeps her indulgences in check. She does not smoke or drink or eat crappy food or sleep late or skip practice. She’s like Sandra Dee if Sandra Dee possessed a secret, bone-deep desire to knock your punk ass into the artificial turf.

“If her goal was just to be a great soccer player, that goal would’ve already been accomplished,” observes her husband, Philadelphia Eagles tight end Zach Ertz. “She could rest on her laurels and be complacent. But she’s not.”

Julie Ertz is the opposite, consumed by self-scrutiny, poking at what she perceives as her weak spots like a tongue prodding an aching tooth.

“When you fail or you make a mistake, you learn a lot about yourself,” she explains. “That wouldn’t happen if I just did everything right. You know what I mean?”

IF YOU ASK her, Ertz will tell you she doesn’t have nightmares. She dreams nearly every night. But her head is filled instead with happy fantasies and memories. Sometimes she dreams about past vacations or trips to the sea. More often, she dreams of soccer.

“I see moments of a game that could happen,” she says, knitting her brow. Premonitions and “visions,” not of trophies but of plays, of tackles. Even at rest, she is strategizing.

Ertz sees nothing odd about this. The infinite calculus of soccer has been her abiding preoccupation since she was an eager child in Mesa, Arizona, stumbling into a lifelong passion while trying to beat her two-years-older sister, Melanie, at something, anything. (Ertz’s grandmother remembers Julie making up rules to win at Candy Land.) 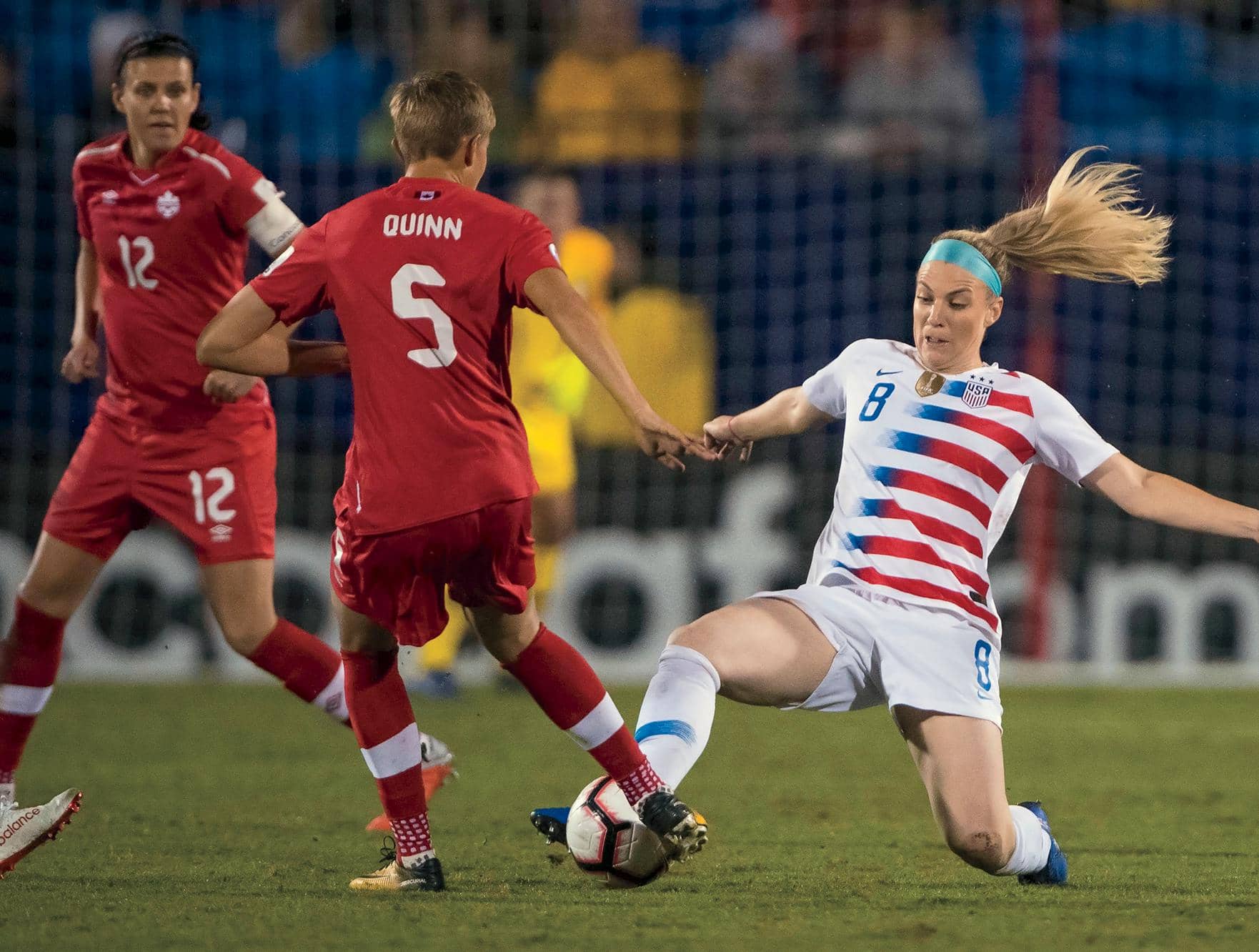 Natural athletes, the sisters were encouraged to battle. Their father, David Johnston, a starting kicker for LSU, designed makeshift physical challenges to entertain them whenever he could. Chores became races. An idle jump on the trampoline transformed into a contest to see which daughter could jump higher over a swinging pipe.

David worked in the cold room at Shamrock Foods, lifting heavy stock 65 hours a week. Mom Kristi was a nurse. The family bedrock was hard work and the belief in its ability to cement character. “It was tough love,” Ertz recalls. “My dad wanted us to find that drive at a young age,” Melanie says. “The mentality was, ‘No one is stopping you but yourself.’”