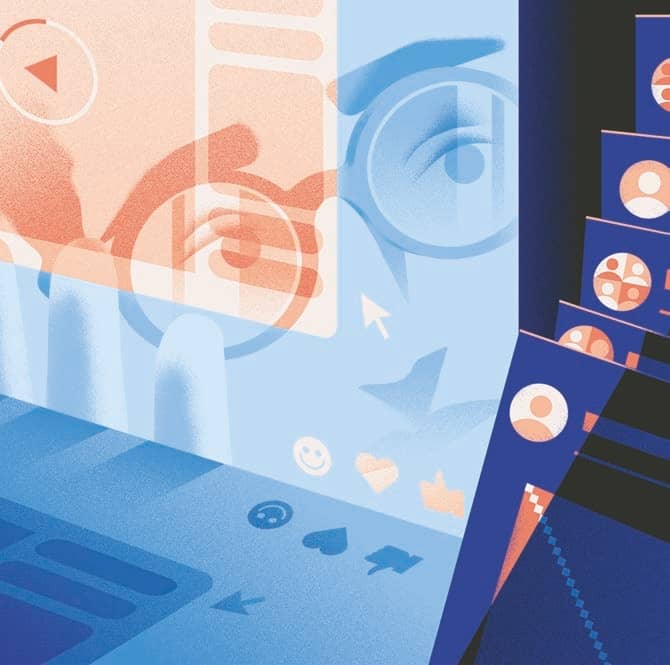 Algorithms have made the social network predictable and dreary. My quest to make it random and fun.

FACEBOOK IS OFTEN sarcastically described as a platform for sharing baby pictures. When I log in, I do see some of those—but many of the babies in my feed are baby rats.

The story of how these hairless pups started populating my News Feed began when a friend told me about a Facebook group—a lively forum for discussing baby names—that had captivated her. I joined too, and soon afterward my timeline was peppered with requests for “a strong Irish name” or “a name similar to Everly which we unfortunately can’t use.”

I’m not currently in the market for a baby name, but the novelty was welcome. So I sought out more: I joined groups or liked pages for wine lovers, slow runners, appreciators of dinosaurs, southeastern- Michigan snow obsessives. Eventually, I found Everything Rat Breeding.

Before I started this experiment in joiner ism, using Facebook felt like watching an algorithmically conducted parade of the lifestyles, accomplishments, and worldviews of my peers. The experience seemed calculated to produce envy and insecurity. But the pictures of dinosaur fossils and reviews of wines with “masculine fruit” transformed that procession into a bizarre and occasionally delightful show, affording me glimpses of all the things there are to care about beyond what preoccupies my particular social circle.

I liked the variety; it made browsing feel less competitive. And witnessing strangers go on about some mundane subject that mattered deeply to them was oddly engrossing. The new occupants of my News Feed were giving me a break from personalization that I didn’t know I needed.

According to Ethan Zuckerman, the director of MIT’s Center for Civic Media, most of today’s social networks are predicated on bringing people’s offline relationships online. And since offline networks are shaped by homophily— people’s tendency to cluster with others who are like them—social networks, too, tend to surround users with the types of people they already know. Homo phily is an ancient human instinct, but Facebook’s algorithm reinforces it with industrial efficiency.

What I was trying to do, then, was stop Facebook from doing what it is inherently good at, and hack it to give me the reverse: serendipity, surprise, hetero phily. Soon I started to wonder: Were there other, better ways to do this?