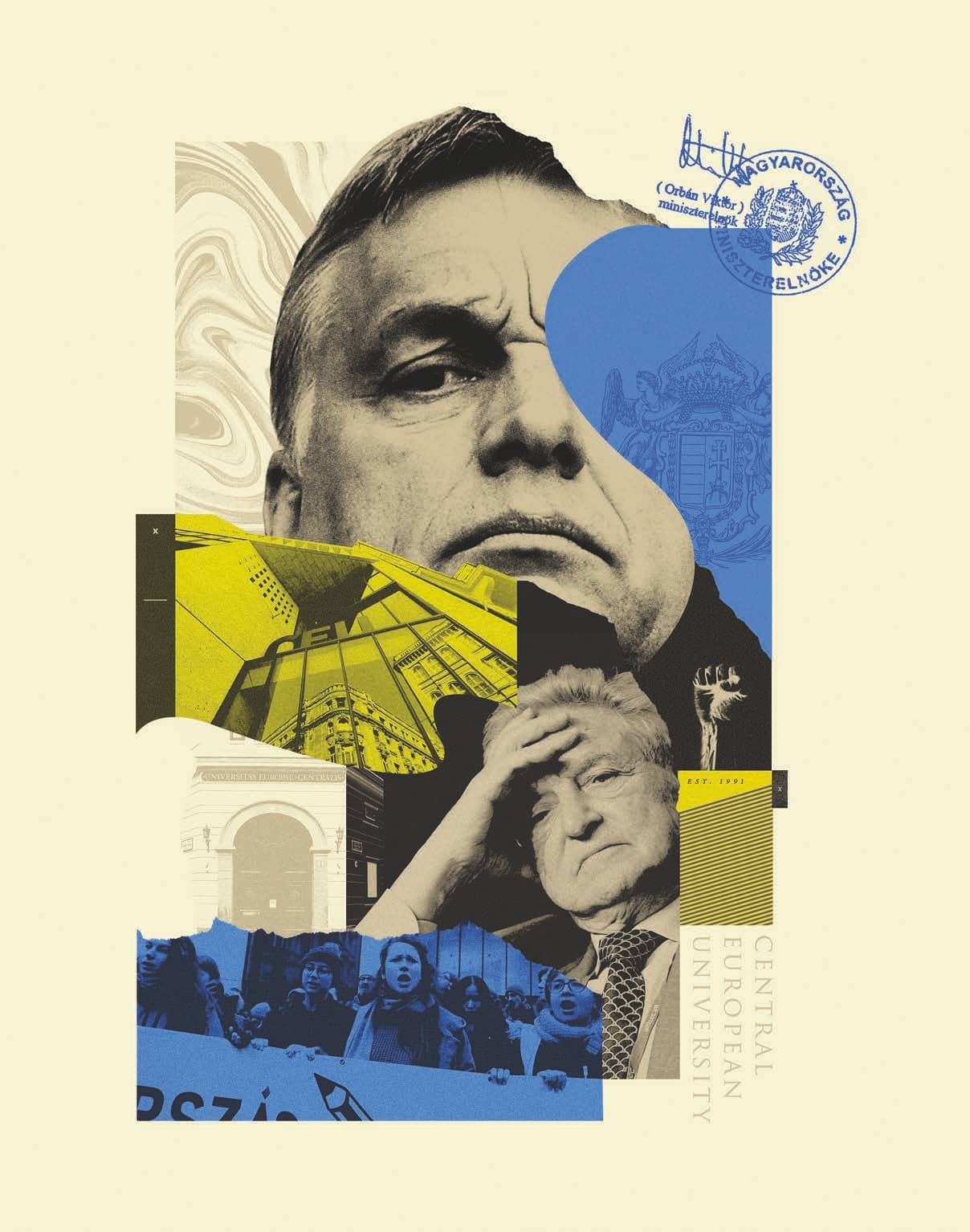 As Viktor Orbán systematically removed all impediments to his autocratic regime, one independent institution stood defiant: a university, in the heart of Budapest, founded by George Soros. The school’s survival became a test of liberalism’s ability to beat back its new ideological foe—in Hungary and beyond.

On a relentlessly gray Buda pest morning, Michael Ignatieff took me to the rooftop of Central European University’s main building. The newly erected edifice is all glass, sharp angles, exposed steel, and polished wood. Its roof had been landscaped with billowing grasses and fitted with iron benches, as if a section of New York City’s High Line had been transported to Hungary. “This is probably my favorite place on the campus,” Ignatieff told me. He wore a newsboy cap in the winter chill; his reading glasses, which he’d absentmindedly neglected to remove, were wedged on the very end of his nose. The broad Danube and the architectural remnants of the city’s imperial past were splayed out in front of us.

Ignatieff, an intellectual who made an unsuccessful bid to become prime minister of Canada, has spent much of his career studying the fragility of human rights and the irresistible impulse toward nationalism. When he became CEU’s rector in 2016, however, he didn’t believe the job would catapult him to the front lines of the fight for liberalism. He imagined it would be more like a pleasant home coming. Hungary is the native land of his wife, Zsuzsanna; he had come to know the place intimately on regular visits to her family. “I’m of a certain age,” he said. “I thought, That’s a nice way to top it off.”

He pointed to nearby government buildings. In one of them, the authoritarian government of Prime Minister Viktor Orbán had, less than a year after Ignatieff ’s arrival, devised a plan to evict CEU from Hungary. The university is widely considered the country’s most prestigious graduate school—it’s been a training ground for presidents, diplomats, and even members of Orbán’s own inner circle. But that inner circle had turned against the institution that had nurtured it and now sought to chase the school from the country’s borders. As Ignatieff explained this to me, he shook his head. “This was not supposed to happen here,” he said.

Hungary once had some of the best universities in post communist Europe. But Orbán’s government has systematically crushed them. His functionaries have descended on public universities, controlling them tightly. Research funding, once determined by an independent body of academics, is now primarily dispensed by an Orbán loyalist. When I arrived in Budapest, a pro-government website had just called on students to submit the names of professors who espoused “unasked-for left-wing political opinions.” A regime-friendly weekly published an “enemies list” that included the names of dozens of academics, “mercenaries” purportedly working on behalf of a foreign cabal.

Like Pol Pot or Josef Stalin, Orbán dreams of liquidating the intelligentsia, draining the public of education, and molding a more pliant nation. But he is a state-of-the-art autocrat; he understands that he need not resort to the truncheon or the midnight knock at the door. His assault on civil society arrives in the guise of legalisms subverting the institutions that might challenge his authority.

CEU is a private university, accredited in both the United States and Hungary, and for that reason it has posed a particular challenge to the regime. The school was founded by the Budapest-born financier George Soros, whom Orbán has vilified as a nefarious interloper in Hungary’s affairs. Soros had conceived the school during the dying days of communism to train a generation of technocrats who would write new constitutions, privatize state enterprises, and lead the post-Soviet world into a cosmopolitan future. The university, he declared, would “become a prototype of an open society.”

But open society is exactly what Orbán hopes to roll back; illiberal democracy is the euphemism he uses to describe the state he is building. The prime minister and his allies did their best to make life unpleasant for CEU. Then, in April 2017, Parliament passed a law setting conditions that threatened to render CEU’s continued presence in the country illegal. All of Ignatieff ’s hopes of settling into a placid academic life dissipated. Eighty thousand protesters filled the streets.

The effort to evict CEU rattled liberals across the world. Academic freedom—a bloodless term, but a concept at the core of all that the West professes to treasure— seemed to be slipping away in a country where it had looked firmly established. Universities rushed to declare their solidarity; 17 Nobel Prize winners signed a letter of support. Even the United States, run by a president who is no fan of George Soros, offered to help the university.

And so, for much of the past two years, CEU has been the barricades of a civilizational struggle, where liberalism would mount a defense against right-wing populism. The fate of the university was a test of whether liberalism had the tactical savvy and emotional fortitude to beat back its new ideological foe.

A charming fact about George Soros is that he keeps a court of eccentrics, loquacious intellectuals and academic theoreticians who have become his advisers and friends. Among them is a historian named István Rév. He presides over the CEU archives, a collection of artifacts of communism and the movements that resisted it. Rév works in a dimly lit room at a rolltop desk, beside an antique radio. As he ushered me into his office, he said, “I was the first employee of the university here, and I hope I will not be the last.”

When Rév met Soros, in the 1980s, the financier was already fantastically rich but as yet little known. Soros was just beginning to spend down his fortune, and he hurled himself into the work of philanthropy. “When he arrived in Budapest, he came alone, with a briefcase,” Rév remembered. “After a long trip, he told me, ‘I found worthy causes on which I could spend $10 million, and I’m so happy.’ ”

Not many Jews of Soros’s age would have returned to Budapest with such beneficent intentions. He was 13 when the Nazis invaded the city. Soros went into hiding and assumed a false identity; forged papers announced him as the Gentile Sandor Kiss. Liberation brought fresh horrors. Soros stepped over corpses in the street. Years later, he discovered that Russian soldiers had raped his mother.

Shaking off the traumas of the war, Soros sought to remake his life in London. He worked as a waiter and railway porter before eventually enrolling in the London School of Economics. Soon, he found himself sitting in classes taught by a fellow expatriate who would become his intellectual hero: the Viennese philosopher Karl Popper.

Popper had written one of the great works of Cold War liberalism, The Open Society and Its Enemies. An open society, he wrote, demanded an ethic of tolerance and intellectual modesty. Through democratic debate, a nation could struggle toward knowledge, but there were no ultimate truths. Society could progress only through a process of intellectual experimentation, subjecting ideas to criticism and abandoning them in the face of contrary evidence.

When Soros pondered how he might help reshape the country of his birth as it emerged from communism, Popper’s voice was still ringing in his ear. Hungary, like all Soviet societies, had been cordoned off from the wider world of knowledge. Through the foundation he established, Soros attempted to remedy this. In the last decade of the dying regime, he imported hundreds of Xerox machines to a country where only 12 had existed. The photocopiers were a revolution in Hungarian communications, allowing samizdat to travel faster and farther.

After the fall of the Berlin Wall, Soros deployed this model on a larger scale. He spent ecumenically and with minimal bureaucratic impediments. Balázs Trencsényi, a history professor at CEU, first heard of Soros’s foundation as a student. Without an appointment, he strolled into the office, filled out a few forms, and left with a grant to fund a series of film screenings. His was a typical experience. “All the cultural journals were funded by Soros,” Trencsényi said. “Left-wing, right-wing. It didn’t matter.” Soros’s goal was to create the institutions that made an open society viable—not to predetermine which side prevailed in the debates those institutions would foster.

It was in this same audacious spirit that he launched CEU in 1991. The university, he hoped, would compensate for the sorry condition of higher education that had emerged from communism. It would train a new elite for the hard work of reconstructing trampled societies.

Rootless cosmopolitan is a slur often hurled against Soros by his anti- Semitic critics, but it is a worldview he proudly claims as his own. He initially imagined an institution that would transcend borders, fostering the movement of scholars and ideas across the former Soviet bloc. Václav Havel, who had just ascended to the presidency of Czechoslovakia, helped secure an old trade-union hall in Prague, which became one of several CEU outposts in the region. But the right-wing prime minister elected in 1992 was far less hospitable. Soros’s decentralized vision quickly proved logistically and politically impossible to sustain.

Reluctantly, he confined his university to his native city. It lived in the ruins of an old television production company; its buildings were ramshackle, the neighborhood even shabbier. But the university was a church key that opened a bottle of intellectual energies. It attracted students who had come up through stultifying institutions where lecturers droned from prepared texts and censored their thoughts to conform to Marxist dogma. Students breathed the freedom of American-style seminars and encountered previously verboten texts, which they treated with a reverence that humbled their Western instructors.

Soros imbibed the atmosphere of experimentation and enthusiasm. “He was involved in every detail,” according to Rév. Leaning on his network of intellectuals, he suggested people to hire, such as the great scholar of nationalism Ernest Gellner. He weighed in on which academic programs the school would offer. On many of his visits, he would stay in the CEU dorm, a building that had once housed the city’s factory workers.

Soon, CEU’s footprint in the city grew, with a gymnasium, a publishing house, and the most important social-science library in the region. The school could even be said to have achieved the lofty goals of its founding. A generation of alumni had remained tethered to the region. One former student became the president of the Republic of Georgia; others became members of the European Parliament. Hungary joined the European Union in 2004, setting the country on a liberal trajectory.

With a justified sense of self-satisfaction, Soros gave the university a $250 million endowment in 2001. Six years later, he stepped down as chairman of its board. CEU modified its raison d’être to adapt to its success. It admitted more students from Africa, Latin America, and other non continental locales, reconstituting itself as a global university.

Sitting in the school’s café this winter, I could still glimpse its achievements. A student wearing a hijab leaned over a laptop, a defiant sight in a country that has hermetically sealed itself off from Muslim migration. Several tables over, a professor (and former dissident) wiped croissant crumbs from his beard as he called to a student who had skipped his class to protest the current regime. I’d met the student earlier in the day; he had told me that he was gay, and that CEU was one of the few places in his native country where he could hold hands with a partner without fear of violent recrimination. He pointed in the direction of a nearby bathroom: “The only gender-neutral toilet facility in eastern Europe.”