'It Was Engineering That Would Have To Bend ' 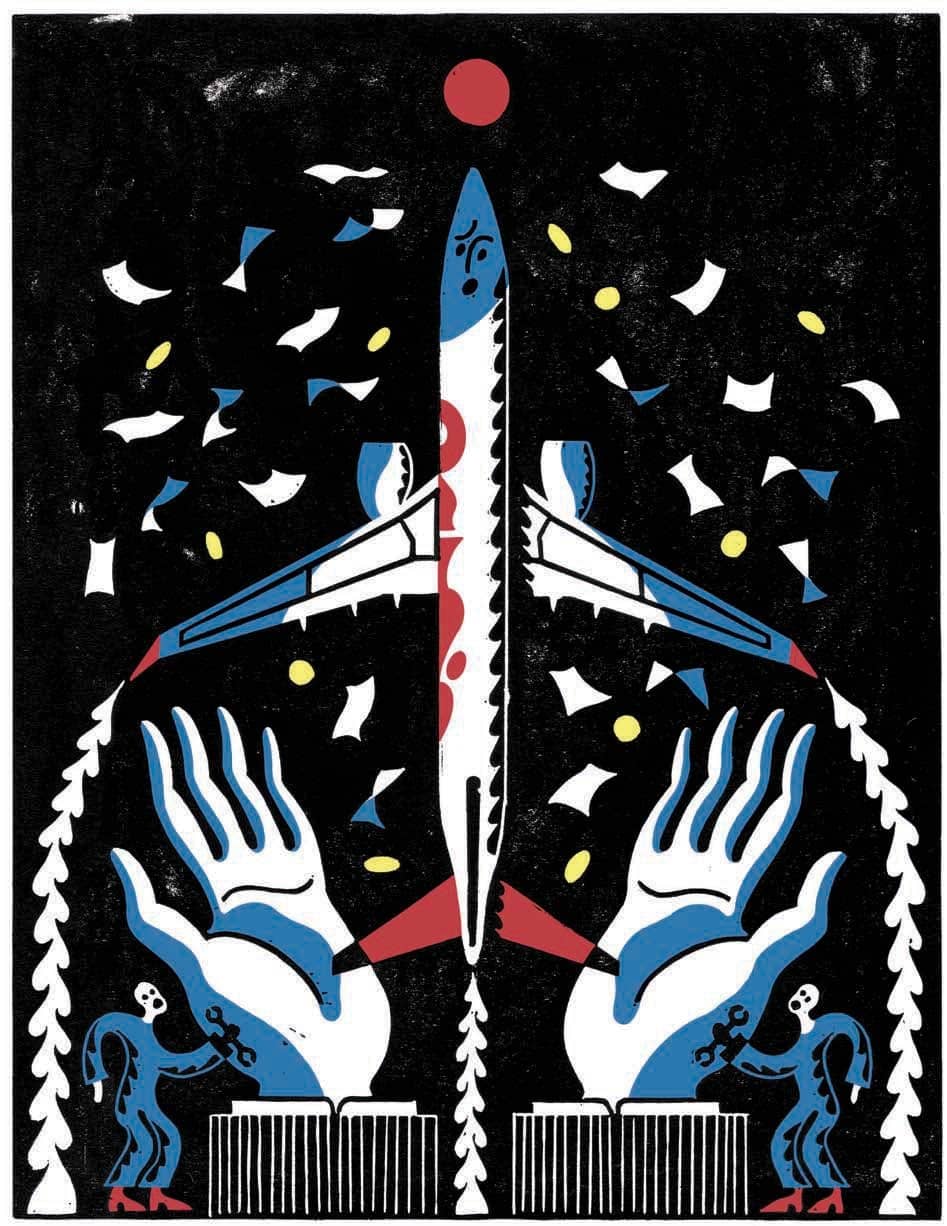 How Did Boeing, Renowned For Its Engineering Culture, End Up In Such A Tailspin? By Putting Its Bottom Line Above All Else

THE SIMULATORS IN WHICH PILOTS TRAIN TO FLY airliners are engineering marvels in themselves. Picture a squat pod raised 10 feet in the air and mounted on spider legs that let the whole contraption move up, down, left, right, forward, and back. To meet Federal Aviation Administration requirements, the pilots sitting inside must be shown a realistic representation of what they’d see outside a real cockpit, so images are projected onto a curved mirror. Many simulators use cinema-quality sound to create a cacophony of alerts and warnings. Each machine costs $15 million or more, and airlines pay hundreds of dollars an hour for pilots to use one.

As Boeing Co. developed the 737 Max, the newest version of its most profitable and now most infamous plane, engineers repeatedly invited FAA officials to look over their designs in one of the company’s Seattle simulators—an even more realistic mock-up built from pieces of actual aircraft. One purpose was to find out how to ensure that pilots switching to the new plane from previous 737 models never had to get inside one and take what’s known as Level D training. “We showed them all these scenarios, and then we’d ask, ‘Would this change equal Level D?’ ” recalls former Boeing engineer Rick Ludtke.

Boeing got what it wanted: Pilots moving from a 737-800 to a 737 Max would need at most Level B training, which they could complete in an hour or two on an iPad. That let airlines deploy the $120 million plane more quickly. For Boeing, it was an important selling point that gave customers one less reason to defect to its European rival Airbus SE.

Since the crashes of two Maxes within five months—a Lion Air flight last October and an Ethiopian Airlines flight this March—the pressure and maneuvering around simulator training has struck Ludtke as essential to understanding how an emphasis on costs twisted a process that’s supposed to produce the best, safest planes. “They could have done better and should have done better, but better wasn’t an option,” says Ludtke, who started at Boeing in 1996 and holds two U.S. patents in flight crew alerting systems. Federal investigators probing the Max recently interviewed Ludtke for hours about the connection between simulator requirements and the new software system linked to the crashes, known as the Maneuvering Characteristics Augmentation System, or MCAS.

Managers didn’t merely insist to employees that no designs should lead to Level D training. They also made their desires known to the FAA team in charge of 737 training requirements, which was led by Stacey Klein, who’d previously been a pilot at now defunct Skyway Airlines for six years. “She had no engineering background, her airplane experience was very limited,” Ludtke says. “It was just an impossible scenario.” FAA spokesman Greg Martin says the position Klein occupies, “while substantial, is primarily that of “an organizer, facilitator, and executor of the FAA policy and guidelines,” and that in her role she calls on experts from multiple organizations.

In a statement, Boeing says, “The 737 Max was certified in accordance with the identical FAA requirements and processes that have governed certification of previous new planes and derivatives. The FAA considered the final configuration and operating parameters during Max certification, and concluded that it met all certification and regulatory requirements.” Yet somehow a company renowned for its meticulous engineering installed software that drove the aircraft into the ground while the pilots searched desperately for answers.

The crisis, according to more than a dozen interviews with former employees and FAA inspectors and hundreds of pages of internal emails and records, is best understood as part of a larger drama that’s played out as Boeing has reshaped its workforce in an all-consuming focus on shareholder value. The push for efficiency has only accelerated under Dennis Muilenburg, who since becoming chief executive officer in 2015 has demanded price concessions from suppliers, heaped more cost demands on engineers, and cut the workforce about 7 percent while making many more planes.

Adam Dickson, a manager of fuel systems engineering for the 737 Max, retired in November after almost 30 years at Boeing—in part, he says, because of dismay over performance targets that risked sacrificing safety for profits. “It was engineering that would have to bend,” he says. The company’s priorities were expressed in annual performance reviews in which engineers were measured in part on how much their designs had cost. “Idea’s [sic] are measured in dollars,” as a manager put it in one engineer’s annual evaluation. Boeing rejects the suggestion that it prioritizes cost. “At no time did our performance targets reward or encourage a trade off against safety,” the company says.