The World After the Whistle-Blower
An accounting of the early days of impeachment.

ON TUESDAY, SEPTEMBER 24—in a move that was either months overdue or dangerously premature, depending on whom you ask—House Speaker Nancy Pelosi announced a formal impeachment inquiry. In the weeks since, public polling has continued to climb in its favor, but that doesn’t mean the Democrats are about to smoothly “impeach the motherfucker,” as Representative Rashida Tlaib declared the night she was sworn into Congress. The impeachment proceedings of the past were divisive national theater, and that was before Twitter and Facebook and a conspiracy-theorist president superpowered the country’s partisanship. Are we headed for a full-fledged constitutional crisis by Christmas? A survey of this high-stakes moment, from the Democrats’ war room to the Republicans’ bunker (and what it has felt like for the rest of us).

1. Her Game by GABRIEL DEBENEDETTI

Nancy Pelosi has not had a simple job since the Democrats won back the House last year, having to, most prominently, swat away an ill-fated attempt to replace her as Speaker, navigate uncharted political waters with the emergence of the progressive “Squad,” and try to negotiate with Donald Trump. But on no single issue has she faced a more persistent drumbeat from assorted members of her caucus than the impeachment of the president, whom her entire party regards as a criminal but whom far fewer have believed it wise, politically, to prosecute. Suddenly, though, almost her entire caucus is behind her, and Pelosi’s months of caution (years, really, since Maxine Waters and Al Green first started calling for impeachment) look something like strategic prescience. It’s true that the Ukraine story was impossible to predict, and the polling swing in favor of impeachment has happened faster than even its loudest boosters could have hoped. But having held its fire on matters of Trump’s emoluments, his tax records, his alleged collusion, and his obstruction of justice, the Democratic House appears to be in a nearly unified position, poised to bring charges on an egregious, easy-to-follow transgression committed in plain sight—which even her lefty critics have to admit is not the worst place to be. 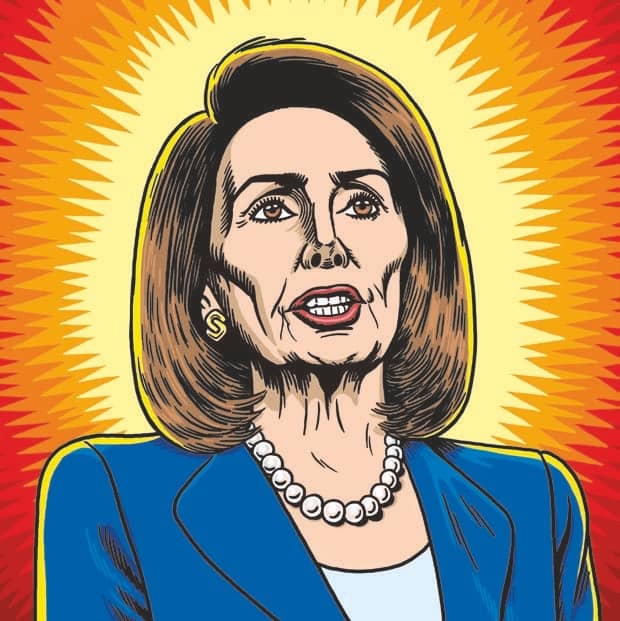 When Pelosi convened the 235 House Democrats behind closed doors on a Tuesday afternoon late last month to announce that she would back an impeachment inquiry into Trump—now that there was clear evidence he had pressured Ukraine’s president to effectively support his 2020 campaign—she was careful to remind them she’d had a plan from the start. “We had ourselves on a path, seeking the truth there, and that work must still go on,” she said to her colleagues in the Capitol, referring to investigations into the administration they’d pursued since regaining control from Republicans in January. “What has happened this past week is grievous and serious with our Constitution. And so we must. It is understandable to the public. It has clarity in terms of what he did,” she continued, according to a senior Democratic aide in the room. “We have to strike while the iron is hot. This is a national-security issue—a national-security issue— and we cannot let him think that this is a casual thing. So that’s where I’m at.”

It was a monumental, if reluctant, step for the 79-year-old San Franciscan, who is simultaneously a liberal icon and the face of the party Establishment, who watched Bill Clinton’s impeachment from the House, then shut down calls to impeach George W. Bush during her first stint as Speaker eight years later. The 17-term congresswoman, who has been known to quote Abraham Lincoln’s line “Public sentiment is everything,” had long bet there was no way to successfully impeach Trump earlier in his presidency—frustrating the 138 members of her caucus who were already calling for it before the Ukraine news broke. As recently as early last month, she had privately dressed down the staffers who were leading what she saw as the overly aggressive, undisciplined, and premature impeachment push, sniping, “You can feel free to leak this,” according to Politico.

“I’m delighted that she’s come around and is moving forward,” said even Massachusetts congressman Seth Moulton, who led the most recent failed campaign to oust Pelosi, and who’s been pushing for months for impeachment on national-security grounds.

Another way of looking at it—the way Pelosi sees it—is that circumstances demanded action. “People say, ‘Oh, the Democrats changed their minds.’ We didn’t change our minds,” Pelosi told her colleagues on a private conference call late last month, according to an aide on the call. “I think impeaching the president is very divisive unless we have to. And I said we would wait until we had the facts, and we have the facts. And I said when we have the facts, we will be ready. And we are.”

Pelosi is now in charge. None of her allies has set up external war rooms or rapid-response operations. Not even Democratic National Committee chairman Tom Perez, theoretically the head of the party, found out about Pelosi’s decision to move forward with the inquiry until it became public, said Democrats familiar with the timeline.