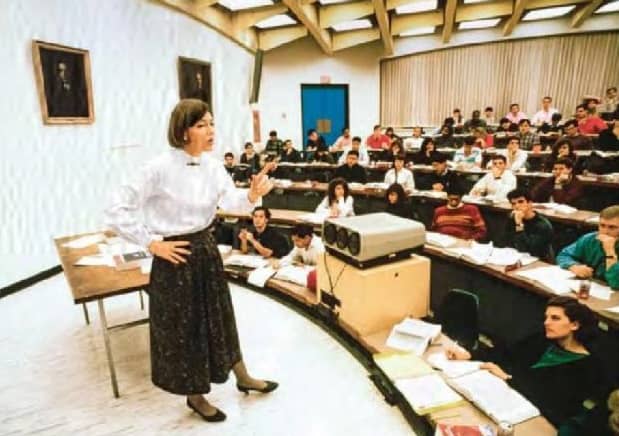 She has been instructing students since she was 8 years old and is the most professorial presidential candidate in modern history. But does America want to be taught?

Rebecca Traister
THE STORY OF Elizabeth Warren’s career in education— at least in legal education— begins with one word: assumpsit. It is literally the first word of the first case she had to read for the first class she ever took as a 24-year-old law student at Rutgers University in 1973. She has recalled, in vivid detail, the fear and confusion she’d felt as a young mother, former public-school teacher, and unlikely law student when her first law professor walked into the room and called on a student whose name began with A, asking her, “Ms. Aaronson, what is ‘assumpsit’?” Ms. Aaronson had not known, and neither had the next several students he called on after her. Ms. Warren also had not known what assumpsit meant, despite having done the reading for the day. Since her last name was at the end of the alphabet, Warren was spared public humiliation, but she left her first law-school class badly shaken, with a degree of clarity about how she must move forward: “Read all the words and look up what you don’t know.”

In the following years, Warren became a law-school professor: first teaching night classes at Rutgers and eventually landing at Harvard, where she worked for 16 years before becoming a U.S. senator from Massachusetts in 2013.

In 1999, more than 20 years after Warren attended her first law class at Rutgers, Jay O’Keeffe, who now works as a consumer-protection lawyer in Roanoke, Virginia, attended his first law class at Harvard. It was taught by Warren. “She did not say anything like ‘Hello’ or ‘I’m Liz Warren, and welcome to Contracts,’ ” O’Keeffe recalled. “Instead, she put her books down, looked over her glasses at her seating chart, and said, ‘Mr. Szeliga, what’s ‘assumpsit’?’ ”

Assumpsit—which, Warren told me, “means that the action is in contract rather than in tort”— became Professor Warren’s calling card, though she says no matter how widely advance warnings spread, 96 percent of new law students would walk in unprepared for it. When Joseph Kennedy III introduced Warren at the Democratic National Convention three summers ago, the Massachusetts representative and grandson of Robert Kennedy recalled his “first day of law school, my very first class” in 2006, during which he had been the unlucky mark: “Mr. Kennedy, do you own a dictionary? That’s what people do when they don’t know what a word means; they look it up,” he recalled her saying during his public immolation. “I never showed up unprepared for Professor Elizabeth Warren ever again.”

“Yes, I do to my students what my teacher did to me,” Warren said gleefully, as she drank tea on her Cambridge sunporch in July. She spoke in the present tense, as she often does, about her teaching career, even though it’s been more than eight years since she has commanded a classroom.

So much of Warren’s approach to pedagogy can be understood via the assumpsit gambit: With it, she establishes direct communication and affirms that she’s not going to be doing all the talking or all the thinking; she’s going to be hearing from everyone in the room. By starting with a question that so many get wrong but wind up learning the answer to, she’s also telegraphing that not knowing is part of the process of learning.

Warren’s work as a teacher—the profession she dreamed of from the time she was in second grade—remains a crucial part of her identity, self-presentation, and communicative style. Her 2014 book, A Fighting Chance, opens with these sentences: “I’m Elizabeth Warren. I’m a wife, a mother, and a grandmother. For nearly all my life, I would have said I’m a teacher, but I guess I really can’t say that anymore.”

But just because she’s not in the classroom these days doesn’t mean that those she’s talking to can’t smell it on her from a mile away. Leading up to the first round of debates, the Onion ran a headline reading, “Elizabeth Warren Spends Evenings Tutoring Underperforming Candidates.” And during a June episode of Desus & Mero, the two Bronx hosts did a riff on how Warren “definitely gives you teacher swag, but the teacher-that-cares-a-lot swag,” imagining her being the kind of teacher who comes to your house to tell your mom you have potential. “You came all the way to the Bronx for this? Wow … that blanquita cares.”

Warren has won multiple teaching awards, and when I first profiled her in 2011, early in her Senate run and during what would be her last semester of teaching at Harvard, I spoke to students who were so over the moon about her that my editors decided I could not use many of their quotes because they were simply too laudatory. Many former students I interviewed for this story spoke in similarly soaring terms. One, Jonas Blank, described her as “patient and plainspoken, like an elementary-school teacher is expected to be, but also intense and sharp the way a law professor is supposed to be.” Several former students who are now (and were then) Republicans declined to talk to me on the record precisely because they liked her so much and did not want to contribute to furthering her political prospects by speaking warmly of her.

Yet it remains an open question whether the work Warren does so very well—the profession about which she is passionate and that informs her approach to politics— will work for her on the presidential campaign trail.

Plenty of our former presidents have been teachers. Some of them, including William Howard Taft and Barack Obama, taught law; some, including Millard Fillmore, primary school. Warren has been both law professor and primary-school teacher, and as a person who ran for office for the first time in her 60s, her four decades as a teacher define her in a way Obama’s stint as an instructor in constitutional law never did. Here, as in all else, it matters that she’s a woman. Teaching is a profession that, in post-agrarian America, was explicitly meant to be filled by women. That means teachers historically were some of the only women to wield certain kinds of public power: They could evaluate and punish, and so it was easy to resent them.

In 2019, we have a historic number of female candidates in contention for the Democratic nomination. But many of them have approached politics via traditionally male paths: Kamala Harris and Amy Klobuchar were prosecutors, Kirsten Gillibrand worked at a white-shoe law firm, Tulsi Gabbard was in the military. Elite law schools were historically the domain of powerful men, but on the campaign trail, Warren is determined to establish herself not simply as an educator of the elite but also (with an anecdote she trots out often) as a kid who used to line up her dolls and pretend to assign them homework. The candidate’s presentation of her teaching career—from kids with disabilities at a New Jersey public school to fifth-grade Sunday-schoolers in Texas to Kennedys in Cambridge—as key to her identity means she is hurtling toward the White House as a specific kind of feminized archetype.

It’s a risk. Schoolmarm, after all, is a derogatory descriptor, one that was deployed against Hillary Clinton, also a former law professor, and one that flicks at the well-worn stereotype of the stern lady who can force you to recite your times table. The phrase has already been used to critique Warren’s political demeanor, perhaps most memorably by Boston Democratic consultant Dan Payne. In 2012, Payne wrote a radio segment quoting women complaining about Warren’s “hectoring, know-it-all style”; he claimed she treated delegates to the Democratic convention “as if [they] were her pupils” and advised her to “stop the finger-wagging; it adds to her strict schoolmarm appearance and bossy manner.” Back in 2005, when Warren was testifying in front of the Senate on bankruptcy reform, challenging then-Senator Joe Biden on stripping protections from families, Biden dismissed her with a slick, backrow smirk: “Okay, okay, I got it; you’re very good, professor.” More recently, Democratic adviser David Axelrod observed to The New York Times Magazine’s Emily Bazelon that one of Warren’s drawbacks is that “she’s lecturing … people feel like she’s talking down to them.”

Much of this is uncut, misogynistic claptrap, but Axelrod’s swipe edges toward a legitimate concern: If the election of our current president makes anything clear, it’s that many Americans do not want high-minded talk from their leaders. There is fair reason to worry that a candidate who is literally a professor runs the risk of alienating rather than energizing voters. In the primary field, Warren polls far higher with college-educated voters than she does with voters without a college degree.

And that doesn’t begin to touch on what would happen should she get out of the primary: In February, Donald Trump Jr. offered a preview of how his father will likely frame a fight against an educator, telling the young conservatives at one of his father’s rallies, “You don’t have to be indoctrinated by these loser teachers.” It’s obviously a broader Republican line of argument. In July, former Wisconsin governor Scott Walker tweeted about “leftwing college professors” embracing socialism and showing “disdain for America.” Of course, Walker lost his 2018 gubernatorial reelection bid to former public-school teacher and administrator Tony Evers, in the same election cycle that Jahana Hayes, once named Teacher of the Year by Barack Obama, became the first black woman to represent Connecticut in the House of Representatives.

In fact, with waves of teachers’ strikes politicizing voters in many states, it seems possible that 2020 could easily be framed as a contest between teachers coming for Republicans and Republicans eager to vilify teachers. The role our current president would play in such a setup takes no imagination: He is the ultimate back-of the-class bully, mocking and menacing the woman with the answers standing at the front. We have seen this before.

When I asked Warren whether these are dynamics she worries about, she answered with an emphatic no: “Nobody wants to be talked down to—nobody. That’s true whether we’re talking about big national audiences or law students or fifth-graders or little tiny kids.” But, she said, this is not at all at odds with the work she has done as an educator, because “that’s not what teaching, good teaching, is about.”

Instead, she said, “good teaching is about starting where you are and the teacher having the confidence in you to know that if you had a little bit more information, a little bit more time on this, if you thought about this from a little different perspective, you might move a little bit.”

IT SHOULD PROBABLY go without saying that, as a child growing up in Norman, Oklahoma, Warren, then called Betsy Herring, loved school. It was an era in which not many paths were open to ambitious young women. But her second-grade teacher, Mrs. Lee, “of ample bosom and many hugs,” Warren said, took her aside and said, “ ‘You know, Miss Betsy, you could be a teacher.’ And bam! I was sold. It changed my whole vision of myself.”

After that day with the reading group, Warren has written, “I harassed the neighborhood children to read out loud so I could play teacher, and when I couldn’t get any takers,” that’s when she began to map out that rigorous curriculum for her dolls.

But just because Warren’s ambitions had been electrified didn’t mean her path was clear. “My mother wanted me to get married to a good provider and have babies and be safe; she didn’t want me to do anything else,” Warren said. Her three older brothers joined the military, worked in construction, started a business. “But me? My fortunes would be tied to the man I married.”