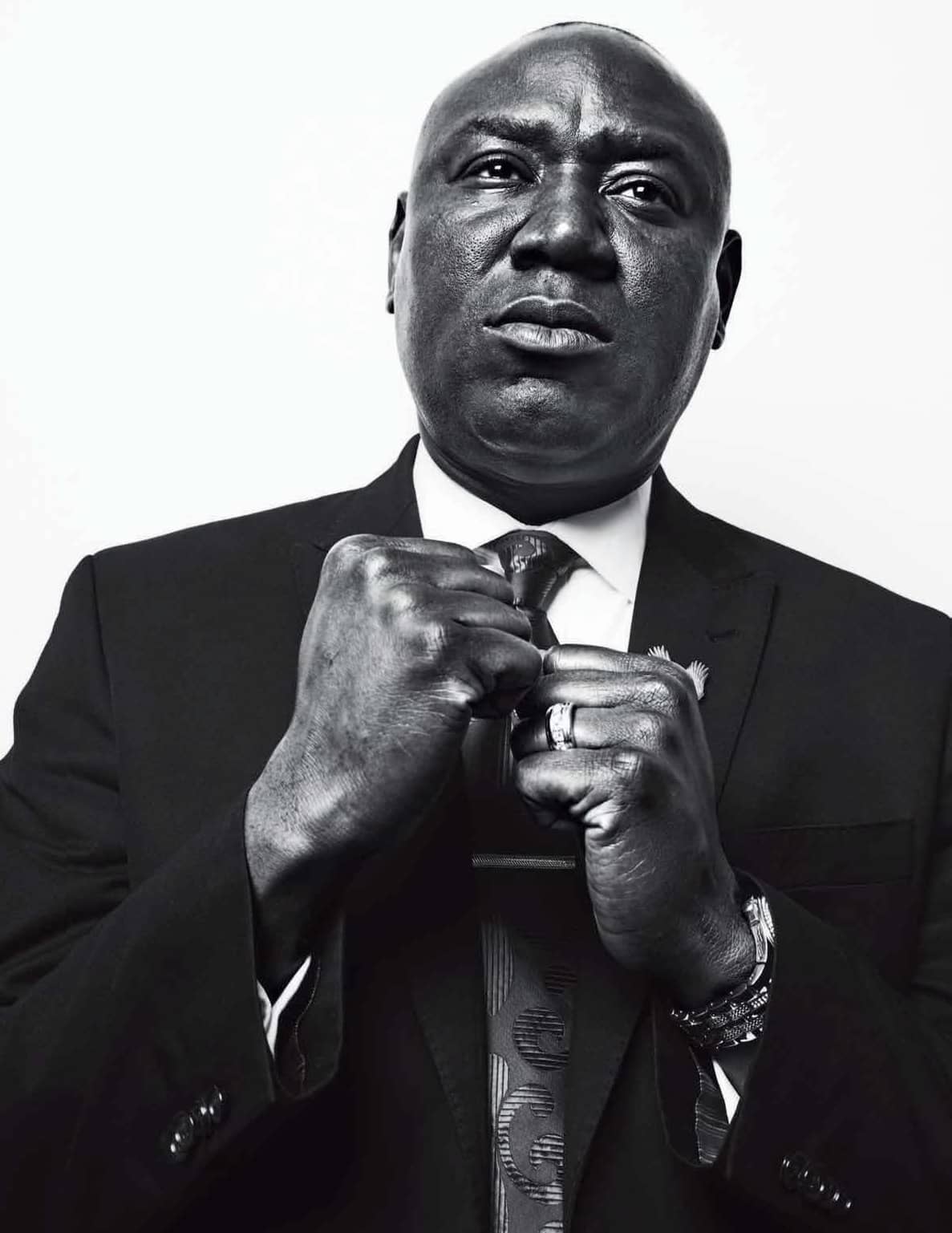 In the lobby of a luxury hotel in Atlanta, Ben Crump is meeting a new client for the first time. His face is round and somber as a war mask. He’s wearing a dark suit, a crisp white shirt with French cuffs, gold cuff links, a heavy gold watch, and a thick gold wedding ring. On his left lapel, a gold Eagle of Justice spreads its wings.

Like many of the lawsuits Crump takes on, this one seems destined to make national headlines. But unlike the explosive battles that made him famous—he represented the families of Trayvon Martin, Mike Brown Jr., Tamir Rice, Alesia Thomas, and Terence Crutcher and has worked on many, many less notorious Black Lives Matter cases—this one doesn’t involve a grieving relative, police violence, or a dead child. The man seated across from him is a successful financial-services executive, dressed with casual elegance in a dark blazer and knit shirt, who was educated at a prestigious HBCU and is accompanied by an old friend who happens to be a former state representative. His trouble started, he says, when he went into the wrong bank to cash a $2,000 check and the teller told him to wait while he checked with the branch manager. “I asked him if there was a problem, and he told me, ‘No, it’ll just be a second,’ ” the executive says. “Then a policewoman comes up and says, ‘I’m here for you.’ ” He laughs. “I thought she was just being friendly! Maybe she’s a client, you know.”

“I don’t get arrested,” he scoffs.

“When she was handcuffing me,” the executive answers. “She said, ‘I can tell you want to run. Don’t run.’ ” Looking freshly astonished, he asks, “Run where? And why?”

The check was a distribution from his 401(k), so it had two bank names on top. One was his home bank’s, the other that of the bank that managed his company’s 401(k) fund, and he thought he could cash it at either one. A vice- president did call to apologize a few days later, but the bank must not have told the police it was a mistake, because the charges haven’t been dropped. The executive isn’t sure he wants to raise a fuss —in his business, “arrested for bank fraud” isn’t the best thing to have at the top of your Google search. He’s only here because the former state representative called Crump and set up the meeting. 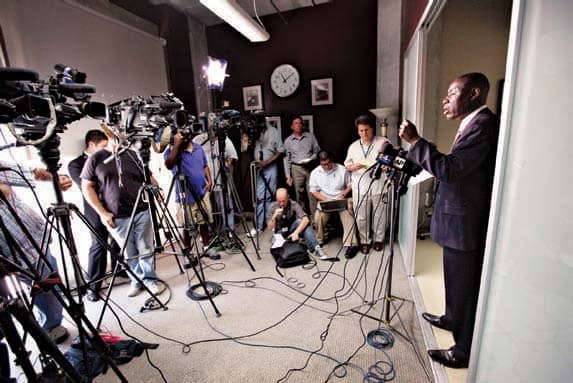 Crump sits still, coaxing out the details in a soft voice that mixes legal terminology with phrases like “how they done you.” The executive tells him the bank’s official story, which is that a branch manager called a fraud line and got the wrong information. But he’s not sure he believes it. He was on his way home from the gym, still wearing his workout clothes, and the bank was in Cobb County.

The former state representative explains: In black neighborhoods, people say Cobb is short for “Count on Being Busted.” It’s the richest and whitest part of Atlanta, home to Newt Gingrich and Bob Barr.

Pulling out his phone, Crump shows the executive a video he’s already put together from the security-cam footage. The title, superimposed over the entire clip, is “Banking While Black.” He wants to set up a press conference in the morning and release it to the media.

“Let’s talk about that,” the executive says nervously.

“How did you feel in the back of that police car?” Crump asks.

“Obviously, I went through a variety of feelings,” the executive says, then changes the subject.

That triggers the executive’s memory—the four hours he spent in a little room with no windows, the fear he felt of getting raped or beaten, the inmate who noticed how nervous he was and said, “Relax, it’s not who you know, it’s who you blow.” He was there half the night before the police let him make a phone call. Nobody knew where he was. But the hardest part was losing his voice. From the time he walked into the bank to the moment he got out of jail, nobody would listen to anything he said. “That to me is what really happened,” he says. “Because I’m a person who’s able to explain what’s going on, and you’re always taught if you can just explain and you’re in the right, then it’s supposed to go okay.”

The truth, Crump admits, is that the bank would settle this case in a heartbeat. But the executive could also choose not to settle. “I think this video is going to go viral, and I think it’s gonna be a teachable moment for America. But, more importantly, it’s probably gonna save a lot of regular black folks from having to go to jail.”

The executive mulls it over.

“This is your Rosa Parks moment,” the state representative tells him.

“You don’t even have to say anything if you don’t want to—the video will speak for itself,” Crump says.

“If you want to make an impact—” Crump begins.

The executive jumps in: “What if you just wanna be a selfish ass?”

FIVE YEARS AGO, sitting in the lobby of a hotel in St. Louis, I asked Crump why he became a lawyer. It was the day of Michael Brown Jr.’s memorial service. Thousands of people had gathered in the street outside, their faces contorted by grief and rage, tears streaming down their cheeks, chanting “Hands Up, Don’t Shoot” and “No Justice, No Peace.” He told me about growing up in a little North Carolina town called Lumberton, about his mother working in the tobacco fields, about watching one of his uncles get beat up by a policeman for the crime of getting into a white college: “I guess he wanted to let him know that no matter where he went, he was always going to be black.”

Some of his stories seemed honed through retelling to an unbelievable perfection, like parables from the Bible, and a phrase he often used to introduce them—“I’ll never forget”—was tinged with the reverence of an oath. He’d never forget his great- grandmother, who raised at least a dozen grandchildren while their parents worked, some not even family. If you said you were too sick to go to school, she’d hold up a switch and say, “Are you gonna die? No? Then you can go to school.” His mother taught him about unions and working-class solidarity. When he won first prize in an essay contest, and her supervisor at the Converse factory wouldn’t let her take the day off to go to the ceremony, she said, “I don’t care what you do. I’m gonna be there to support my son.” When she got back, he fired her. So she cleaned hotel rooms and worked in the tobacco fields. And he was born in 1969—this wasn’t ancient days. 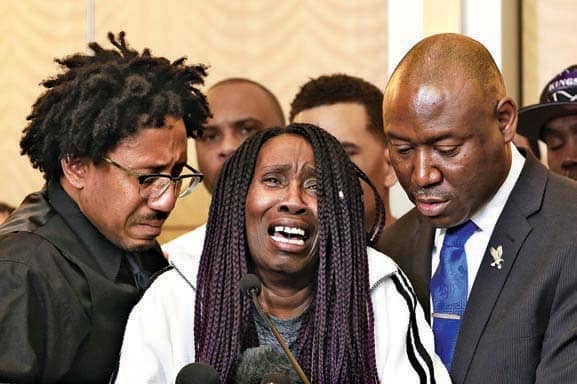 Many of his stories centered on the railroad tracks that ran through the middle of Lumberton. The white people lived north of them, the black people on the south side. The only hospital was on the north side, the only library was on the north side. But when he was going into fifth grade, his mother told him the white kids and the black kids were going to start going to school together because of a lawyer named Thurgood Marshall and a case called Brown v. Board of Education. September came and the school bus took them across the tracks. “And I’ll never forget,” he said, “there was this little white girl who had a hundred-dollar bill. My mother would have had to work a whole week—maybe two weeks—to get a hundred-dollar bill. I was like, ‘Who gave you that?’ She’s like, ‘My parents gave it to me, and I can do what I want with it!’ ”

You had to cross the tracks to play on Lumberton’s youth football team too, so Crump’s uncle Jesse—the only person he knew who had a car—used to drive him and his friends to practice, six or seven of them packed in like beans in a jar. Then the city issued a rule that all football players had to have a phone at home. “That pretty much ruled out most of the black kids,” Crump said. But Uncle Jesse had a phone, and he told the recreation lady, “These are my boys, call me.” She said, “Jesse, you trying to tell me that all of these are your children?” “Yes, they’re all my boys,” he said again, trying avoid a direct lie. “No way are all of these your biological sons,” she insisted, and Uncle Jesse got stubborn. “Yes, they are,” he said. “They’re all my boys.” So they all got to play football that year.

By the time he left that town, at 13, Crump knew what he wanted to do. He got his law degree from Florida State University in 1995 and started a two-man firm in Tallahassee with a classmate, Daryl Parks, splitting time between bread-and-butter work like personalinjury cases and “trumped-up charges against black people.” 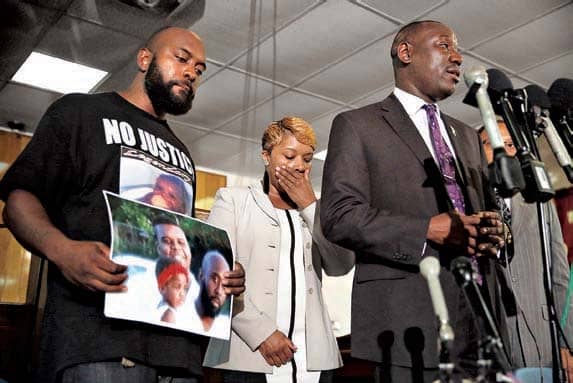 Crump and Parks won some impressive settlements— $10 million for a man whose face was burned off by a gas explosion, $13 million for the family of a mother and child who were killed in a plane crash, $5 million for the family of a preacher who was killed by a drunk driver. Crump had a way of selling a vision that was more like a political rainmaker than like another courtroom lawyer, a settlement counselor named Fernandez Anderson told me, giving the example of a difficult negotiation with an Avis executive who was nickel-and-diming them over the payout for a man who’d been paralyzed for life by an Avis car. “It was right before Christmas, and Ben does something only Ben can do—he appealed to the humanity of the guy. He said, ‘Don’t you want to go home and tell your son you did something good for Christmas?’ It had nothing to do with the law, nothing to do with facts, it was just one person talking to another person. And we walked out of there with the deal done.”