Belittled for decades by executives at Viacom and CBS, mocked by journalists and insulted by her own father Shari, Redstone now sits atop a $30 billion media empire

In February 2017, Shari Redstone, the 62-year-old billionaire heiress and controlling shareholder of CBS and Viacom, with a honking Boston accent and a fondness for the bouffant blowout, was at the 50-yard line at Houston’s NRG Stadium to watch her beloved Patriots play in the Super Bowl. That was when CBS board member Charles Gifford, who towered over the five-foot-two Redstone, his own board’s vice-chair, grabbed her by the face to command her attention and said, “We need to talk, young lady.” She froze. Her father, Sumner Redstone, had amassed an empire of media companies like CBS, which encompassed Showtime and Simon & Schuster, and Viacom, whose cable channels (MTV, Nickelodeon, VH1) and movie studio, Paramount, had seen better days, its stock price plummeting as mismanagement and cord- cutting ate into profits. For months, she had been arguing that combining the companies would keep them competitive; CBS board members, including Gifford and CEO Les Moonves, riding high on having the No. 1 broadcast network, had resisted.

Making a scene, Redstone worried, could jeopardize her already fragile relationship with CBS’s board, which was loyal to Moonves and had watched her replace Viacom’s chief executive and several board members. “There was a concern that no matter how gingerly she approached the issue, the CBS side would interpret it as part of a power play,” said someone who gave her advice about it at the time.

Over the years, as her father’s on-again, off-again heir apparent, Redstone had made not a few enemies in the family businesses. She had been described by journalists channeling anonymous executives as “pushy and overly keen for power,” someone who “rubs everyone the wrong way” and “developed something of a reputation for not mastering the details.” Her father went from anointing her his successor in 2002 to faxing a reporter to say she’d made no contribution. Finally, Sumner, 93, ailing, and absent from the public eye, was officially supporting her authority, but the road to reconciliation had been rocky. According to the journalist Keach Hagey, who wrote a biography of the family, Sumner used to call his daughter a “cunt” in front of company executives. 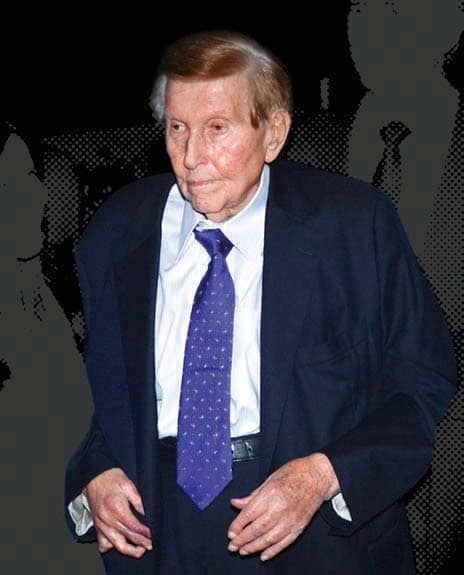 Redstone kept quiet on the 50-yard line, but in the months that followed, she took a series of steps to quietly push Gifford out. In the summer of 2017, she told Moonves, with whom she’d long been friends, that Gifford had made her uncomfortable, and when merger talks restarted, she believed Moonves would see to it that Gifford wouldn’t make it to the board of a combined company. According to Redstone, Gifford called her afterward and told her that was just how he talked to his daughters.

“I’m not your daughter,” she replied. “I’m the vice-chairman of the board you sit on.”

As merger talks continued in the spring of 2018, she asked Moonves for another assurance that Gifford wouldn’t last. Days later, Gifford, Moonves, and a handful of other board members—including Martha Minow, a former Harvard Law dean whom Redstone had recruited and whom she had recently asked to look into rumors about Moonves’s conduct with women—went to court in a daring bid to strip her of her control of the company, accusing her of “threaten[ing] to replace directors who do not do her bidding, and to force a merger not in the best interest of CBS stockholders … in an effort to bail out Viacom.”

In retrospect, it took some chutzpah for Moonves to take Redstone to court, when as reporting would later show, he was busily covering up the sexual-assault allegations against him. Less than six months later, he was gone. So were Gifford and most of the other elder men on the board who’d backed Moonves. Among the highest echelon of media moguls, the ones who flaunt resortcasual at Allen & Co.’s investment conference in Sun Valley, Idaho, or breakfast at the Regency (though Redstone prefers the Pierre), and who supply the raw material for the HBO drama Succession, her overall position has only strengthened since. A judge affirmed in January that her father had the capacity to designate Redstone as his health agent, definitively blocking claims to his billions by various younger women. CBS and Viacom are once again talking about merging, though Redstone cannot be officially involved until negotiations are further along. If the merger goes through, as it well may this summer, she will have cemented her control of a $30 billion media kingdom.

And Moonves’s stunning downfall has given Redstone, for all her wealth, something she’s never had before: a narrative that justifies her own rise. The #MeToo movement has hardly had a richer target than CBS, with its board of mostly old white men who protected Moonves and shrugged off the company’s treatment of women. Gifford, through his alleged behavior at the Super Bowl, had put Redstone in the position of a woman wondering whether she should report a male colleague for making her uncomfortable. (He would later deny her account, saying he had given her “a quick hug, just like I would my own family.”) The new board of CBS is, like Viacom’s, majority female for the first time—and increasingly stacked with her allies. Women are being put in charge and on the air at CBS. And the face of the family controlling these companies was once the patriarch whose embarrasing sexual exploits were aired in court; now it’s his daughter.

If there is such a thing as a feminist mogul—and there are reasons to think there isn’t—she probably doesn’t emerge in the form of an heiress who privately referred to her father’s girlfriends as his “little sluts.” And yet … why not Redstone? She inherited it, but so did the Murdoch brothers, so did Brian Roberts at Comcast, so did the Newhouses and the Sulzbergers and the Hearsts. “There are certain presumptions about sons who take over jobs from their dads,” she said at an event for The Information in New York last month. (She declined to speak for this story.) All the other media companies have lately gotten bigger, validating her logic for the merger; CBS hasn’t collapsed without Moonves; Viacom is no longer in free fall. And Redstone has yet to be accused of sexually assaulting anyone, which is saying a lot in this business.

“She’s a bright young woman, a lot brighter than people give her credit for,” says former Time Warner CEO Dick Parsons, who, until he stepped down from the board for health reasons, served as her Sherpa for the CBS transition. (Parsons, at 71, is six years older than Redstone.) “Make no mistake about it, Shari is her father’s daughter.” There are some differences, he says, chuckling. “Shari is much more concerned with feelings, hers and those of others. Sumner didn’t care about other people’s feelings as far as I could tell,” he continues. “Sumner was very bright, very focused— Sumner could even be ruthless. And Shari has some of those qualities.”

The onetime stay-at-home mother of three is now around the same age her father was when he leveraged his father’s Massachusetts nightclub turned movie-theater business into a global TV-and-movie conglomerate. The media industry Sumner Redstone disrupted a generation ago has changed almost beyond recognition, its future as precarious as it has ever been. If the CBS-and-Viacom merger goes through, his daughter will have asserted her role as one of the most powerful individuals shaping what we watch and stream in the decades to come—assuming, that is, she’s as cunning and lucky as her father. “It’s kind of an empire thing,” Parsons says. “You know, her father built this thing. It would be a shame to let it all sort of fall apart.”

REDSTONE HAS OFTEN said she didn’t want to be part of the media business until her father wanted her to. But Sumner’s love was never unconditional; what he wanted for his daughter was always in the service of what he wanted for himself. He treated his two children, Brent and Shari, the way he treated the executives who ran the companies he gobbled up: golden until they challenged him, disposable when they did. Shari was said to be his favorite. “We have a very loving relationship—she has been the love of my life,” Sumner told Lloyd Grove for a profile in Portfolio in 2009. “When she was a baby, I was the only one she would let feed her.” In the same interview, to dispel the suggestion that there was any tension between him and his daughter, Sumner produced a months-old fax from her, tersely rescheduling plans, signed “love,” but with Shari’s name scrawled by her secretary.

The son of a nightclub owner in Boston with underworld connections, Sumner was undeniably brilliant, reading lyric poetry in ancient Greek at Boston Latin and Japanese at Harvard, breaking codes during World War II, winning a tax case before the Supreme Court. Shari was the second child born to Sumner and his wife Phyllis, the same year Sumner decided to take over his father’s business. The nightclubs had already given way to a drive-in movie theater, which eventually became an indoormovie-theater chain named National Amusements. Shari attended public schools in suburban Newton, as Sumner began to edge out his father and brother for control.