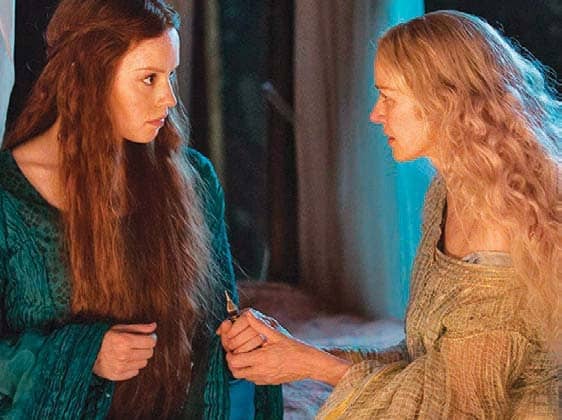 OPHELIA IS THE ultimate female take-back-the-narrative movie. The novelist Lisa Klein and now the screenwriter Semi Chellas and director Claire McCarthy have gotten hold of the character with arguably the least agency of any in classical theater and given her control over her own destiny—to the point where they have to twist the source, Hamlet, into the kinds of knots you’d find in silly heist movies. Ophelia is pretty silly too, but give its makers points for chutzpah.

To refresh your memory: In Hamlet, the teenage Ophelia is bullied and bounced around by three men: her priss-pot father, Polonius; the bloated King Claudius; and her boyfriend, the Danish prince himself. With her father inadvertently skewered and her boyfriend (her father’s killer) en route to England, Ophelia wanders into the court having plainly lost her marbles, does a mad scene for the ages, and goes off and throws herself into a stream. John Everett Millais immortalized her floating corpse in a famous painting that inspired Laurence Olivier’s final shot of her in his Oscar winning film of Hamlet. Ophelia begins with another reproduction of Millais’s painting—except that now Ophelia, played by the galaxy’s most famous female Jedi, says in voice-over, “It’s high time I should tell you my story myself.”