The Simple Beauty Of Sagres

One sail, one windSUP and the simple beauty of Sagres – Franz Orsi gives us a guide to this beautiful corner of the southern Algarve in Portugal and reflects on why windSUP is one of his preferred modes of travel.

Franz Orsi
Looking for an easy, uncomplicated windsurf trip somewhere close to home? A weekend of genuine discovery and pure fun on the water? For me, escaping for a weekend to a close to home hidden paradise meant driving to the most southwesterly point of Portugal and mainland Europe - Sagres, a place where the land ends and the ocean starts. This rugged and forbidding coast has long been considered sacred ground. The Romans called it ‘Promontorium Sacrum’ (‘Holy Promontory’), and is the Latin origin of its name ‘Sagres’ (from Sacrum). For them, this was the ‘Edge of the World’, a supernatural vortex where the setting sun was dramatically submerged by the immense, unknown ocean. Sagres, home to wide open beaches, nooks and crannies, beaten paths and not so-beaten paths, where the winds are consistent all year round and cater for all abilities: this is where I was heading. From my home in Lisbon it was only a 3 hour drive. I was travelling light as for me the beauty of windsurfing lies not only in high performance gear, but also in the simplicity of an inflatable board and a Dacron one-batten sail. So, equipped with my beloved Starboard Touring 12’6” inflatable and super simplistic Starboard compact sail, I hit the road, direction south! 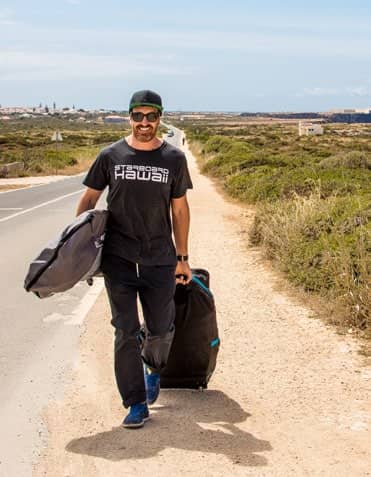 Located on the southwest tip of Europe, Sagres is one of the few spots on the Portuguese coast where you can still find wild places and remote beaches. Sagres is like no other destination in southern Portugal. It is a region for the adventurous, with empty beaches, amazing landscapes and friendly people. Overlooking some of the Algarve’s most dramatic scenery, the small, elongated town of Sagres has an end-of-the-world feel, with its sea carved cliffs rising high above the ocean and wind whipped fortresses that tie it to Portugal’s rich nautical past. It was from here that the Portuguese started their voyages of discovery of the seven oceans. Even now this place carries an undeniable allure that connects visitors with its glorious past.

When to visit Sagres partly depends on what you’re after, and what sports are you most interested in as it is a year-round destination. The benefit of having a windSUP board in Sagres is you can keep your options open and either go sailing or take advantage of the great paddling spots on offer too. Rainy days are a rarity around Sagres so you can count on warm weather and lots of sun, even when the rest of Europe is freezing. In the summer, from May to August, you will find incredibly reliable north winds, but still plenty of ‘surfable’ beach breaks if you prefer surfing over windsurfing. But be warned, in July and August, you’ll need to make your accommodation reservations early or you’ll be sleeping on the beach! In winter, on the contrary, you will find yourself mostly alone in the water, but with incredible waves!