It's Not Just About Combat Aircraft
Much of the attention that is focused on the Indian Air Force scrutinises the IAF’s combat aircraft fleet and its decline from a peak of 39.5 combat squadrons. Insufficient attention is paid to the other important, indeed, vital elements of the IAF which include the air defence network of radars and missiles, the transport and helicopter fleets and the aircraft used therein. These are all worth examining on their own merit, write Sanjay Badri Maharaj
Sanjay Badri Maharaj

India, with its vast airspace, maintains an advanced Air Defence Ground Environment System. This system, along with the civilian air traffic control, is responsible for the detection, identification and, if necessary, the interception of aircraft in Indian airspace. The air defence network is also in the process of being upgraded to cater for ballistic missile threats. Before examining the system in detail, a quick overview is in order. India's air defence network is essentially divided into two parts - the Air Defence Ground Environment System (ADGES) and the Base Air Defence Zones (BADZ). These two components are closely linked and share information relating to air defence tasks. The Air Defence Ground Environment System consists of an array of radars along the western and northern borders as well as a network of mobile systems in the northeast and south of the country – the latter two areas being as yet less covered by radars.

The ADGES network is responsible for overall airspace management and detection of intruders. The ADGES also controls and coordinates the air defences for large area targets. The Base Air Defence Zones, as the name implies, are tasked with the defence of high value targets – air bases, nuclear installations and key military installations. The BADZ is a scaled down ADGES network, limited to an arc of 100km. The BADZ is a far more concentrated air defence environment than the ADGES and provides the only gap-free air defence cover in most sectors. 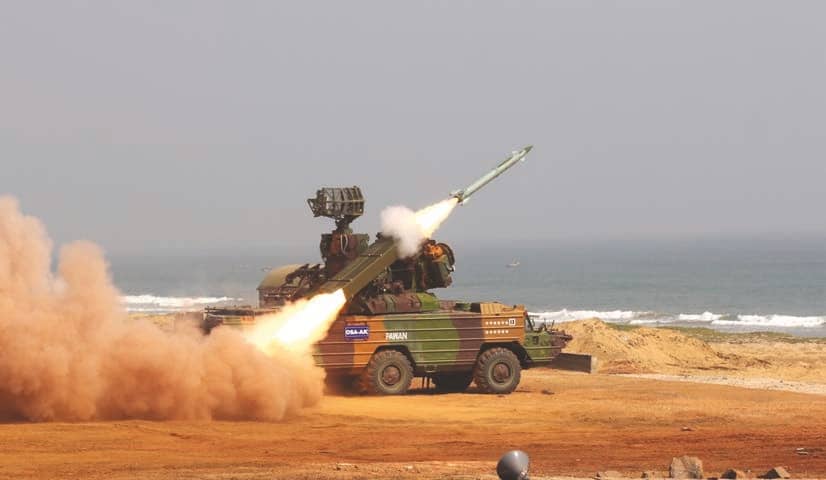 The Indian Air Defence Ground Environment System employs a three-tier detection network. While this system is currently in the process of a major modernisation programme, the basic structure of the ADGES network will remain unchanged. The first layer, rather surprisingly, consists of Mobile Observation Posts (MOP). The MOPs consists of two-man teams equipped with a HF/VHF radio set and field glasses. The personnel in the MOP are very well versed in the visual identification of aircraft as well as their general direction of flight. The MOPs are scattered along the borders at random intervals, ranging between 25 and 45 km.

The MOPs give the first warning of airborne intrusion, the general direction of the attack and, more often than not, the number of aircraft and their type. Additional input can be obtained in wartime from the police and railway police; these agencies report via a communications system based on both HF/VHF radio sets as well as telephone lines. A more advanced communications system based on fiber optic cables and satellite communications is also available to assist the MOPs in reporting to the radar picket line.

The radar picket line, which lies about 150km behind the MOPs, consists of a number of radar clusters. These comprise three radar stations separated at a distance of the sum of their radii. The equipment issued to these clusters generally comprises one Soviet-era ST-68/U and two P-18/-19 radars. These are then flanked by two P-12/-15 radars. The ST-68/U acts as the Control and Reporting Centre (CRC). This may have changed somewhat as the ST-68U, which was plagued with some nagging development problems, has largely replaced older Soviet-made equipment. Moreover, India has been license-producing the French designed TRS-2215D 3-D surveillance radar for a number of years and has derived an indigenously built radar - PSM-33 Mk.2 from it. These have probably supplanted most of the older Soviet-bloc equipment.

It should be pointed out, that these radars are all long-range surveillance types with ranges in excess of 300km and good performance against targets flying at all altitudes – even those employing electronic countermeasures (ECM). These radar pickets are responsible for giving accurate information on the intruding force to the Air Defence Control Centres (ADCC) located behind the radar picket line. The picket line and the ADCC are separated by a first layer of air defence weapons which are the first to engage the intruders.

The backbone of the Indian Air Defence Ground Environment system is a network 13 THD-1955 3-D long-range surveillance radars. This radar, originally of French design, has been license produced in India for several years. This radar, though somewhat elderly, still has sterling performance characteristics and is capable of maximum detection ranges of up to 1000 km, though in peacetime the Indian Air Force usually limits its power to a 400km detection range. These form the core of the ADCCs.

ADCCs also keep in touch with the Base Air Defence Zone (BADZ) control centres. The BADZ is a scaled down version of the ADGES configuration and is geared towards the defence of key air bases and other high value targets. The BADZ is limited to an arc of 100km, compared to the hundreds of kilometres in the case of the ADGES system. Like the ADGES, the BADZ consists of three layers. The first of which are the mobile observation posts, followed by a mixed layer of weapons and their associated radars along with a picket line of low-level radars. These are in turn supported by anti-aircraft artillery batteries. This network is controlled by a ST-68U radar. The BADZ provides comprehensive and gap-free coverage over its assigned area of responsibility. In addition to the above, the IAF operates a number of mobile radars for low-level coverage and “gap-filling”. Among these are no fewer than 30 Indian designed Indra-1 radars and at least 7 Indra-2 systems.