Towards More Capable Ballistic Missiles
In the wake of Defence Minister Rajnath Singh asserting that though committed to the no first use of nuclear weapons by India as of today, in future any action will depend on the circumstances, SANJAY BADRI MAHARAJ narrates the story of India’s ballistic missiles that provide the country required deterrence
Sanjay Badri Maharaj

India’s nuclear arsenal is shrouded in excessive secrecy. While some of this is inevitable, the complete lack of information on the Indian nuclear weapons inventory, delivery options and command and control is somewhat disconcerting. However, as of 2017, it can be safely said that the Indian arsenal — under the control of the Strategic Forces Command (SFC) is at present, land-based and consists of air-delivered weapons and land-based ballistic missiles. While India has made significant strides in developing a submarine-based deterrent, the INS Arihant and her K-4 missiles are a considerable distance away from attaining operational status. In the medium term, these systems will become relevant but at this juncture, India would plan its nuclear deployment and delivery systems around manned aircraft and a mix of short, medium and long-range ballistic missiles. It is also to be noted that with the Nirbhay cruise missile facing development challenges and the BrahMos system’s nuclear payload (if any) being in the realm of pure speculation, Indian nuclear-armed cruise missiles cannot be counted on being part of the Indian arsenal at this juncture but are certainly prospectively so.

Given the fact that India has an avowed no-first-use policy, this imposes a number of challenges for India to ensure the survivability of its deterrent. Having a nuclear triad is one way to ensure survivability but the individual components of this triad must themselves be sufficiently survivable to conduct their operations in the event of a first strike on India. To this end, issues of the number of delivery systems and warheads, the survivability of those assets in the event of a first-strike and the ability of those delivery systems to reach their targets and deliver an effective response are all issues to be considered. While there is little dispute in India about the necessity for strategic and sub-strategic warheads, the issue of tactical nuclear warheads is as yet unsettled, with some notable analysts not being in favour of such systems.

In sum, while India has made some progress towards developing a survivable and viable nuclear triad with the individual components of manned aircraft, road and rail mobile intermediate-range ballistic missiles (IRBMs) and intercontinentalrange ballistic missile (ICBMs), submarine-launched ballistic missiles and land-based cruise missiles, efforts are still ongoing regarding the submarine and cruise missile components of the Indian triad. What is much less clear is whether adequate provisions have been made to build and deploy sufficient numbers of the delivery systems and to ensure that these systems are adequately protected in the event of a counter-force strike. This is not to say that India has not taken such steps, but the pervasive secrecy that permeates all aspects of the nuclear discourse in India makes certainty impossible.

The Prithvi was the first Indian ballistic missile to enter production, with perhaps 180 of the SS-150 variant and 60 of the SS-250 and SS-350 variants being produced. However, it is less clear on whether any of these variants has had anything more than a secondary nuclear role with anecdotal evidence suggesting that 4 SS-150s were armed with 15 kt fission warheads during the 1999 Kargil war.

Development of the missile began in 1983. In its current configuration, the missile is 8.56 m long, 1.1 m in diameter and weighs 4000 kg. Unlike the later Indian missiles, the Prithvi family uses a singlestage, liquid propellant engine, which is essentially two liquid propellant motors side-by-side that provide aerodynamic control as well as thrust vectoring. This engine control allows the missile to stop climbing when it reaches an altitude of 30 km, travel horizontally at this altitude and dive on its target at an 80° angle. The missile has a minimum range of 40 km and in its later variants, a maximum of 350 km.

The missile has a reported accuracy of 50 m circular error probable (CEP) against targets at 150 km. At present, it uses an inertial guidance system and is launched from a Transporter-Erector-Launcher (TEL) vehicle. It takes approximately 2 hours to prepare a missile for launch due to preflight fuelling and various support functions that must be accomplished. Two TEL vehicles require an average of 18 support vehicles that include warhead carriers, power suppliers, fuel carriers,cranes and others.

The Prithvi-I’s first test flight was in 1988 and it officially entered service in 1994. By 1999, there had been 16 successful tests of this missile system. Further trials at user level were conducted from 2003. The missile was first deployed with the 333rd Indian Army Missile Group. Thereafter, the Indian army raised two more groups, the 444th Indian Army Missile Group and the 555th Indian Army Missile Group. Though the Indian army intended to deploy Prithvi as a viable tactical weapon with conventional warheads, more recent tests of the system have been reportedly conducted by the SFC. It should also be noted that the IAF operates a small number of Prithvi SS- 250 variants and the Navy, in its Dhanush missile, has two vessels equipped to launch these missiles. 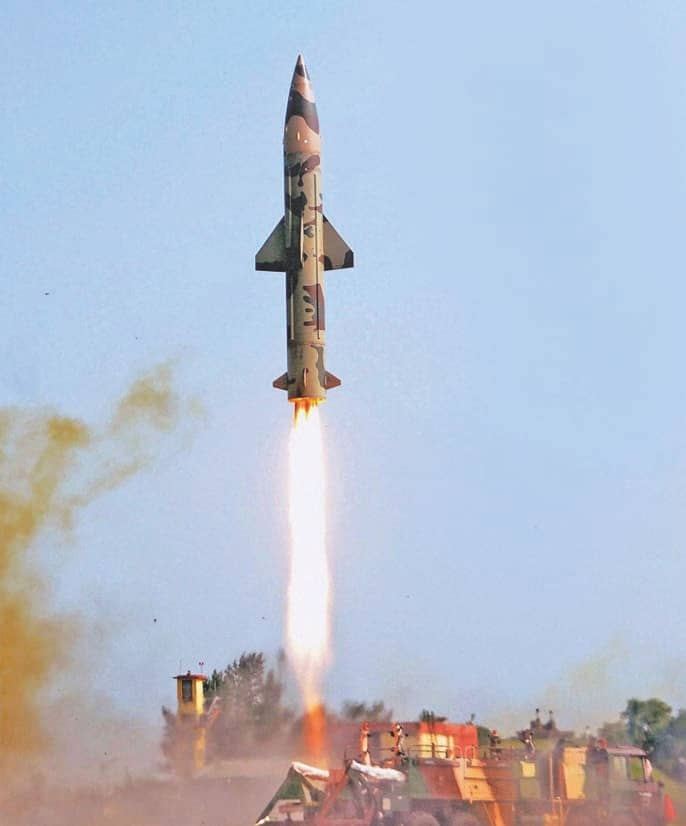 However, the Indian land-based nuclear deterrent rests upon five variants of the Agni family of ballistic missiles which range from medium-range ballistic missiles (MRBM) (Agni-I) to limited-range ICBMs (Agni-V). All, bar perhaps the Agni-V, are in operational service with numbers as yet unknown but with production ongoing albeit at an apparently low rate.

The test of the Agni-V missile in its final deliverable configuration on December 26, 2016, represented a major step forward for India’s strategic deterrence posture. Lost in the very legitimate emphasis on what the test means for India’s nuclear deterrent is the fact that the Agni-V represents the culmination to date of an evolutionary process in the development of India’s ballistic missile capability, whereby one phase of development drew heavily on those versions of the missile that came before. The second test in this configuration took place on January 18, 2018. 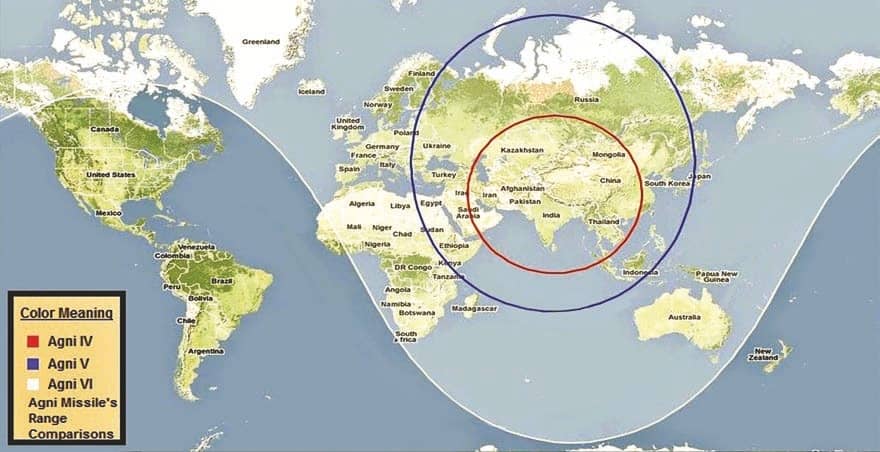 There is one important point to note: India has used depressed and lofted trajectories to simulate ranges on its missiles. Details of the trajectories have not been disclosed. This leads to a strong suspicion, with some foundation, that India has understated the range of its missiles from the Agni-II onwards. This trend continues with the words ‘more than’ being almost a permanent prefix to range figures of Indian missiles. Even more perplexing than the range estimates are the number of missiles produced and in service—particularly given the number of user trials from production batches.

The original Agni missile—formerly a ‘re-entry demonstrator’ and which we can now term the Agni-TD—was tested on May 22, 1989. By its third test in 1994, the 2500-km-range missile had achieved a demonstrated range of 1450 km with a claimed CEP of 300 m. However, what was the most remarkable aspect of this progenitor to the Agni missiles of the 21st century was that it was a hybrid, using the liquid-fuelled Prithvi-1 missile as the basis for its first stage coupled to a solid fuel booster reminiscent of, but not identical to, the booster of ISRO’s SLV-3 launch vehicle. The Prithvi, which had entered bulk production by 1994, was a reliable system with propulsion based on India’s stillborn ‘Devil’ SAM project of the 1970s and married to the proven SLV-3 booster; this low-risk approach enabled India to develop an IRBM capability at a relatively low cost, using proven technology.

However, it was soon realised that the Agni-TD was not a practical weapon owing in large part to its hybrid propulsion and the inherent problems of keeping such a system in a state of readiness or at least in a state of nearreadiness. Moreover, it would appear that India, learning the lessons of the 1980s, decided against deploying its land-based deterrent in static-hardened silos and opted for mobile systems. The Agni-TD was not a mobile system and developing its successor required not only an improved missile but the development of a mobile launcher that could be deployed operationally. It should be noted that while unlikely, the Agni-TD could have been weaponised. Admittedly, it was far from an ideal system but it appeared that its designers were always cognisant of the possibility of the need to weaponise it.