Jesse James And The Road To Gallatin
The early outlaw years of Missouri’s legendary outlaw trail can be discovered on a road trip across the Show-Me state.
Johnny D. Boggs

Poor Jesse James might not have been the victim of what amounted to state-sanctioned murder in 1882—or so many bad movies—if he hadn’t made that first career blunder in Gallatin, Missouri, in 1869. But how did the West’s most notorious bank, train and stagecoach robber get to Gallatin?

It starts at the family farm outside of present-day Kearney, Missouri, where Jesse Woodson James was born on September 5, 1847, and where visitors today can tour the museum, farmhouse and Jesse’s original grave at the Jesse James Birthplace Museum.

Jesse’s Kentucky-born dad, Robert James, became pastor at New Hope Baptist Church—now called New Direction Church— in Holt. Things might have turned out differently too, but in 1850, Robert James left Missouri for the California goldfields only to die of fever four months after arriving in present-day Placerville.

On May 23, 1863, pro-Union forces, looking for Quantrill, hoisted Jesse’s stepdad off the ground with a rope to make him talk. Legend says they also whipped 15-year-old Jesse with a rope. That eventually drove Jesse to join the bushwhackers, but the war was lost. When Jesse attempted to surrender in May 1865, he was shot through the lung. 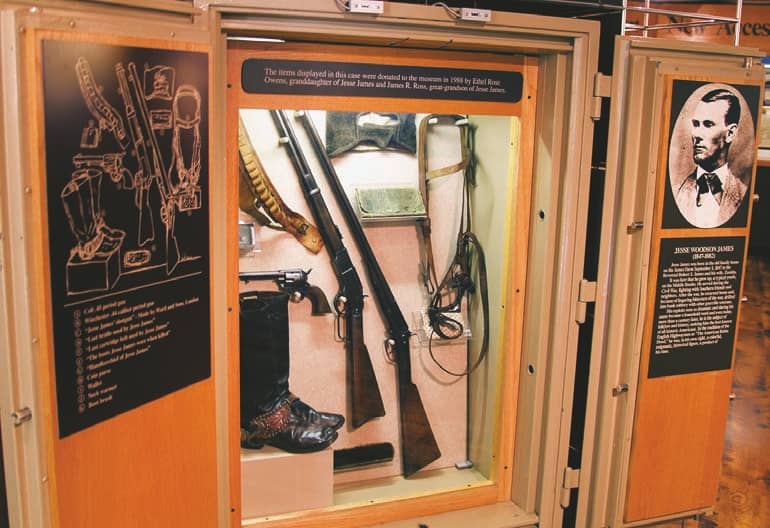 On February 13, 1866, the Clay County Savings Bank in Liberty, Missouri, (visit the Jesse James Bank Museum), was robbed of roughly $60,000 in gold, currency, and bonds. The gang of 10 to 12 men also killed a 19-year-old bystander. Years later, the crime was chalked up to the James-Younger Gang.