Rediscover the state’s inspiring story from exclusion to progress.

When wealthy trapper Ewing Young died in 1841 in what is Oregon today, he had no apparent heirs, and there was no way to determine how to handle his estate. A meeting after his funeral resulted in a proposal to establish a probate government. The following year, in Champoeg, two meetings to discuss wolves and other animals further galvanized citizens, and in 1843 an all-citizen meeting resulted in the establishment of a provisional government—the first acting public government in the large land mass known as Oregon Country. George Abernethy became the provisional government’s first governor.

On August 13, 1848, Oregon Territory was officially organized. The 1850 Donation Land Claim Act led to further settlement but forced tribal members onto reservations in many areas of the region. While encouraging settlement, the new leaders nevertheless in 1844 prohibited blacks from entering the territory by passing the Black Exclusion Law that also prohibited slavery. Those black citizens who were already in the territory were forced to leave or they were beaten.

Owners of slaves were required to free them. While most black residents left the territory, some remained, usually in hiding. With the population continuing to expand due to immigration, Oregon was denied statehood several times as Congress argued whether the territory should be admitted as a “slave” state or a “free” state. 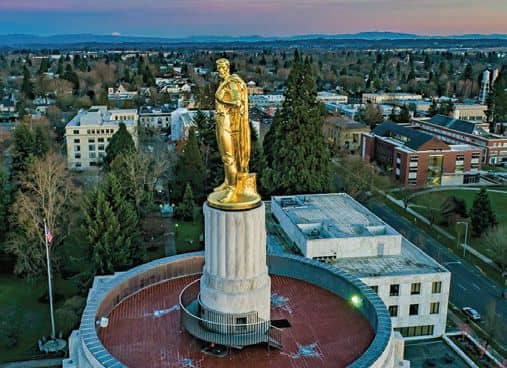