Walking to the Future 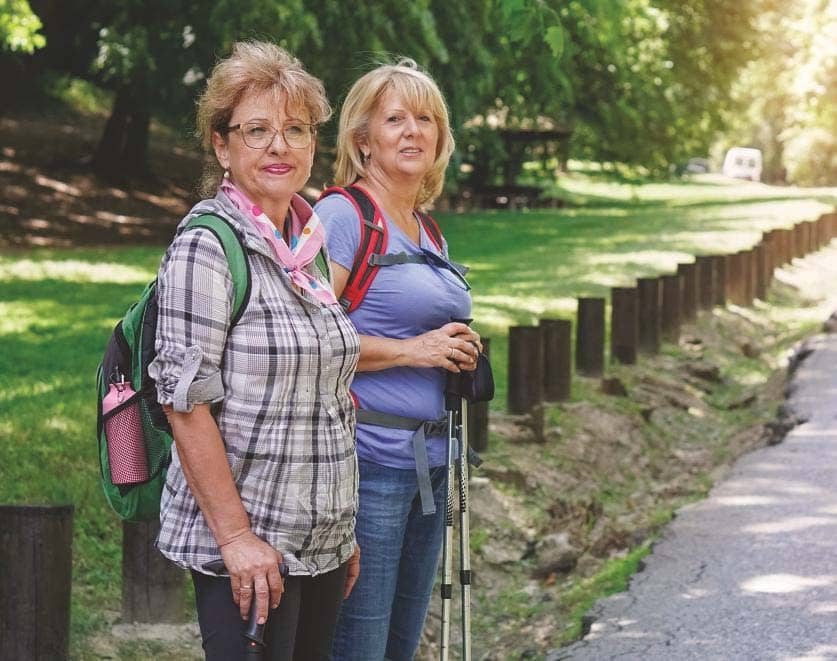 They’d started out as firm friends, but would things be the same when they reached their journey’s end?

When this is over, I never want to see another shop-bought pasty for as long as I live,’ I said, with feeling, as I came out of the corner shop and handed Mel her share of our sorry excuse for lunch on the go – anaemic-looking pasties, crisps and two bottles of cola. ‘Or chip-shop chips.’

‘Or another hotel breakfast with powdered scrambled eggs.’ Mel shuddered. ‘When we finally arrive, I’m going straight to a decent supermarket and filling a trolley with fresh fruit, vegetables and salad. Do they have decent supermarkets in the Peak District? I know I’ve stayed there in the past, but it never really came up. You’re the one who’s practically a resident.’

I laughed. ‘I wouldn’t go that far, though I must admit the place has always felt like home, especially after Mum and Dad moved there when they retired. It was their dream come true, and now it’s ours.’ I squeezed Mel’s arm. ‘We’ll both be residents soon, and don’t worry, there are plenty of good food shops, so we’ll be eating healthily again before long. Let’s hope all this walking makes up for our dreadful diet in the meantime. Now, where’s the map? I want to check the rest of our route for today and make sure we get to the hotel at a decent hour. That detour we took after a wrong turn yesterday nearly cost us our room last night.’

We’d known it wasn’t going to be easy when we planned the trek, but we had seen it as an adventure, perhaps in the process emphasising ‘adventure’ over ‘downright uncomfortable and exhausting’. It’s easy to forget that you can’t do as much at 60 as you could at 20, even after taking into account the fact that you’ve decided to retire at that age because the awareness has crept up that the years are flying by.

Twenty was the age when Mel and I first met, aptly in the Peak District, when we were both students. I’d been having a tough time. My boyfriend had broken up with me, and I was struggling with my course and generally feeling disillusioned about my future. When I’d seen a flyer on the Students’ Union noticeboard, in those pre-internet days, for a group walking weekend, it had seemed as good a distraction as any. I’d visited the area several times, as it was a favourite with my parents, being far enough away to count as a holiday but near enough to be handy for a short break when they needed an escape and the reassurance of the hills.

Mel had listened as I poured my heart out and we agreed that all men were rats. We’d stayed firm friends since then; bridesmaids at each other’s weddings to non-rat men, and even ending up in the same part of the country. When we and our husbands, Rob and Joe, had various chances of early retirement or redundancy within the space of a couple of years, we all knew exactly what we wanted to do. Head for those hills. I bought out my brother’s share of the cottage our parents had left to us – he preferred the warmer climate of France, anyway – while Mel and Joe found a place a couple of villages away.

Walking from the Home Counties – where we’d lived, worked and brought up our families – to our new mutual stamping ground, had seemed a brilliant way of marking the transition to the next stage of our lives. Both sets of children had left home long ago, and we’d always promised ourselves we’d do something different. Our other halves were amenable to going on ahead with the removal vans and settling in, no doubt enjoying the peace and quiet as they awaited their lunatic wives.

We pored over maps with wine at the kitchen table, planning out our route to take in highlights like Oxford and Stratford-upon-Avon, and on through the West Midlands and Staffordshire.

‘Then a hop, skip and a jump, and we’ll be in Derbyshire and the last lap. Well, last few laps.’

‘How long will it take, altogether?’ Mel asked.

She raised her eyebrows.

‘Really, Ali? I can still remember that first weekend, when you reckoned you knew a shortcut that would have us up Kinder Scout and down again in next to no time. The team leader ended up coming out to look for us. Then there was that time you started planting a rockery in the garden and bought loads of alpine plants, thinking you’d do it in a weekend, only for it never to get finished. So let’s say a month, given your record for over-optimism. Possibly longer, to give us time to take the odd rest day and explore.’

Now, three weeks – my initial estimate – into our journey, I opened out the map and traced how far we’d got. We were on the fifth map by now. Really, we should have left the old ones behind when we’d finished with them, as they took up precious room in our rucksacks. Following the route on our phones would have made even better sense, but I wanted something material to mark our achievement, and more graphic than a journal, which I was also keeping.

Assuming we made it all the way, that was.