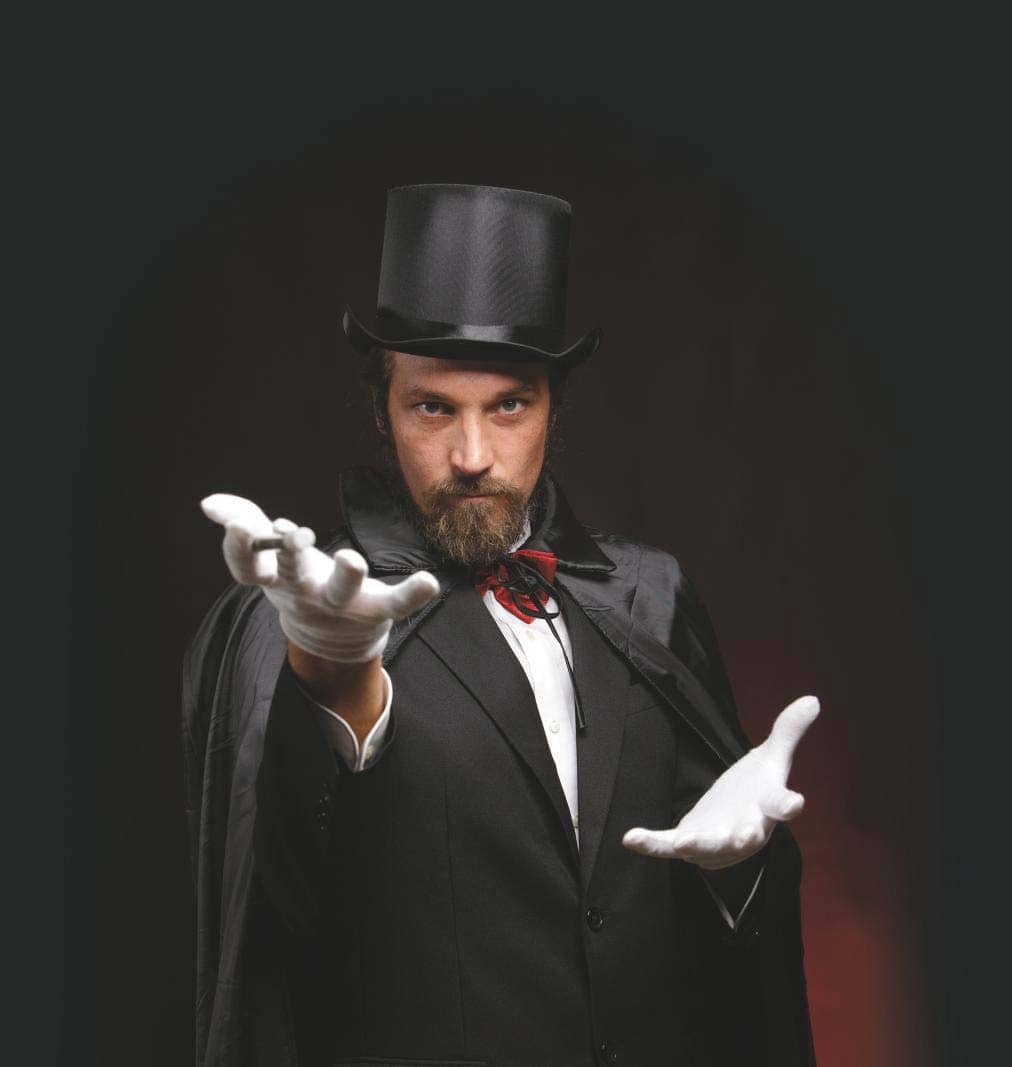 Daring deeds, constant lies and betrayal round every corner – was this really the life for an ingénue like her?

You’ve an admirer, Poll.’ Hannah Liddle, fixing a dyed red peacock feather to her hair, nodded towards the stage footlights as Polly scampered past her into the wings. ‘Chap out there couldn’t keep his eyes off when Tantini was sawing you in half.’

‘He was watching the trick itself,’ Polly reasoned, stifling a yawn and the urge to rub her eyes, which would rub all her panstick off. She’d been doing back-to-back shows as the Great Tantini’s ‘glamorous sidekick’ for the better part of four months now, with only a half day off on Monday.

Not that she relished time off. She shared a crowded boarding house in east London with Hannah and 12 other girls who were ‘regulars’ at the East End theatre.

‘Suit yourself, but I know an admirer when I see one,’ grinned Hannah as the small brass band in the orchestra pit struck up. ‘There’s my cue… shall I see you later, Poll?’

‘I shall be in bed,’ replied Polly, hoping to at least have a bed to herself tonight. At Mrs Daker’s lodging house, you fell into a bed when it became available, and sometimes slept top to tail with another showgirl. In a few months’ time, a promoter would be taking the show on tour. Hannah, a chorus girl in one of the musical acts, had warned Polly that things got even ‘cosier’ on tour, lodgings and budgets shrinking with every day that passed.

Polly took her time to remove all her make-up, calling in on Tantini before she left the theatre. He was sitting in a corner of his grubby dressing room, doing a complicated card trick, and glanced up as she knocked on the door. ‘Poll, come and take a look at this! Not even Houdini can do this card trick.’

Polly hovered out of politeness. Harry Houdini was Victor Tantini’s hero. Only, Victor’s real name was Ted Watts, he was pushing 60, and had never risen further than number three on the bill at backstreet music halls and theatres. Still, Polly didn’t begrudge him his stardust hopes. She’d had plenty of her own when she first came to London five years earlier, set on emulating the great stage actress Ellen Terry. Polly had left behind village life and a widowed mother she sent money to whenever she could, always careful to be cheerful in her letters.

So far, however, she’d found cramped lodgings, penury and round after round of auditions for parts that never became hers. Dutifully, she watched Tantini perform his card trick, marvelling at his sleight of hand. He had picked her out of a chorus line to be his on-stage assistant because she was ‘suitably distracting.’

Tantini himself had a detached appreciation of Polly’s prettiness. According to Hannah, this was because his ‘interests’ lay elsewhere.

Polly, a girl from rural Shropshire, should have been shocked. But there was an honesty about showfolk she responded to.

She left Tantini to scrub off his own panstick and hurried from the theatre by the backstage door, plunging into thick, smoky air. Covering her mouth, she was halfway along the adjoining alley when a voice at her elbow said, ‘Might I have a word, miss?’

She paused and looked up into the moustached face of a tall, imposing man. Sombrely dressed, he doffed his hat at her. Was this the ‘admirer’ Hannah had talked of? She quickened her step, but the man kept pace and said in a low voice, ‘Please. What I have to say is of the utmost national importance.’

Polly paused again. ‘What do you mean?’

The man beckoned her into the shadows of the alleyway. After a second’s hesitation, she followed.

‘Polly Harker.’ ‘Don’t be alarmed, Polly, but I saw you at an earlier performance here. That is why I returned for today’s matinee. You see, I am with the intelligence services. You may be aware that there is believed to be a network of spies in this country, gathering information on our military capabilities, to pass back to the Kaiser in Germany.’

Polly nodded. Relations with Germany were not good. They were said to be assembling a great navy, with Britain feeling they could do no less in order to keep pace.

In fact, the newspapers were full of breathless stories of German spies nested amongst the general populace, especially at ports, gathering information on the British navy. In her last letter, Polly’s mother had urged her to take care, imagining London overrun with ‘enemy agents.’

So far, Polly had had little truck with what she saw as a fear bordering almost on hysteria. It was 1911, for goodness sake! The hopeful start of a new, progressive century, characterised by brave, fascinating people. In particular, Miss Emily Davison, who carried out such daring acts on behalf of women’s suffrage.

Then Griggs said, to her astonishment, ‘You have an opportunity, Polly, to do your country a great service. Indeed, it is your patriotic duty. This is why.’

It seemed that Griggs and his colleagues had been tailing a female spy for some time. In fact, only an hour earlier, they had tailed her to a hotel a few streets away, where it seemed likely she was about to rendezvous with another agent. They had hoped to catch and arrest them both. Unfortunately, the woman had realised she was being followed and left the hotel by a discreet exit.

Griggs and his colleagues had given chase, only for the woman to run out in front of a tram. She had been taken to hospital, unconscious and seriously injured.

‘The situation is this.’ Griggs began to pace the alleyway shadows. ‘We believe there is still a chance that her contact may arrive at the hotel for their pre-arranged meeting. We would like their meeting to still go ahead.’

‘But how, if the woman is… indisposed,’ murmured Polly, the truth sinking in. ‘You want me to take her place?’

‘You are of a similar height and colouring. And you are also an actress. A skilled one.’

‘You flatter me, Mr Griggs. You can only have seen me release doves from a box and emerge unscathed from a box as the lady supposedly sawn in half. Why would that lend credence to my acting ability?’

‘I think you are up to this, Miss Harker. Besides, it is your patriotic duty.’

‘Yes, you said that already.’ But she bit her lip, partly from excitement. This would be a proper acting role. And he had a point about helping her country.

Griggs looked at his watch, apparently taking her silence as assent. ‘I’m afraid we have very little time, Miss Harker. You must come with me now. I have a carriage waiting. We must prepare you accordingly.’

That meant blindfolding her as soon as she was inside the closed carriage, with Griggs telling her, ‘Should anyone in the future ask where you were taken, you will not be lying when you explain you don’t know.’

‘Who might ask?’ she probed uneasily. But he shrugged, leaving it to her imagination.

Half an hour later, she was guided up steps and through a door. Hands removed her blindfold. Griggs swung her round to face him, then pointed to a screen in the corner of a sparsely furnished room. ‘Behind that screen you will find the clothes we wish you to wear. I shall wait outside.’

She stepped behind the screen and into clothes she had only coveted from afar, a velvet dress-coat and high-heeled button boots, set off with a veiled hat and soft fur muff. She opened the door and stepped into a dimly lit hallway, Griggs at her side straightaway. He nodded approvingly. ‘These are the closest we could get to what the woman was wearing when we followed her. You will do very well, Miss Harker.’

Polly marvelled at the ingenuity of the intelligence services. They had a sleight of hand to rival Tantini’s. 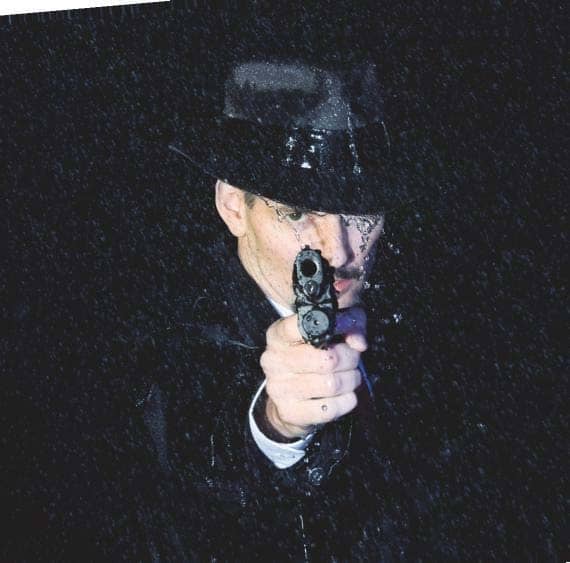 ‘I really need time to practise carrying myself like a lady,’ she said.

‘Just remember to keep your back straight and head raised. Look as if you belong wherever you tread. Now, when you reach the hotel, our hope is that the spy’s contact will “recognise” you from a distance. Do not raise the veil on your hat when he or she approaches. If they speak to you, say as little as possible while drawing them out. It is even possible they will have been given your description without having met you before. If they give you anything, such as a piece of paper, insert it into your muff. For the rest, you must use your acting skills. Are you ready?’

Polly nodded mutely. She was as ready as she’d ever be, to play a part with no lines to pre-rehearse.

The hotel was not of the highest class, but was not a fleapit either. Polly, comforting herself that Griggs and his operatives would be watching from a safe distance, revolved into a crowded lobby filled with cigar smoke and then, head held high and muff gripped between shaking hands, made her way to a bank of velvet sofas just past the front desk. Here, she might linger without looking too conspicuous – perhaps as if waiting for a porter to appear with her luggage, or her husband to return from settling the bill.

She was about to inspect a pot plant near a sofa when she felt her elbow jostled and glanced up with annoyance. She found herself looking into the pale blue eyes of a nervous, sweating man in a grey suit. As their eyes met, his widened.

To her horror, she realised that the game was up straightaway. She had failed!

Instinctively, she reached for his sleeve to detain him, but he was already moving at speed through the cigar smoke and luggage piled in the lobby, heading towards the revolving door.

Polly gave chase, only to be shoved aside from behind by a man she saw was Griggs. She hurried along in his wake, emerging onto the street to see Griggs and his quarry turn into a narrow side street.

She turned into the same street – to find that Griggs had the man cornered. The enemy agent was cowering against a wall, a look of both defiance and terror on his face. The street was otherwise empty. Polly darted forward, then froze in shock as Griggs raised something in his hand. There was a sharp sound, a puff of rising smoke, and the man fell back against the wall.

Polly blinked. Griggs had shot him! In broad daylight!

The noise had brought a few others into the side street, heading for the fallen man and shouting.

Polly zigzagged through them to reach the prone man, forgetting for a moment about Griggs.

‘Is he dead, miss?’ panted a pale-faced street urchin, arriving at Polly’s side as she slipped her gloved hand from her muff and felt for the man’s pulse.