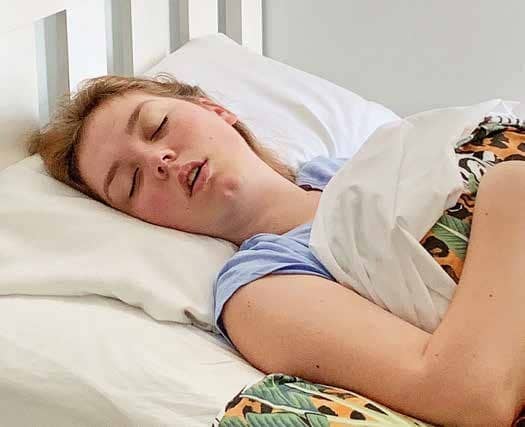 This teen’s prolonged bouts of fatigue are a waking nightmare

It’s a sunny afternoon in Auckland as mother-of-two Jane Callaghan sits on the edge of daughter Alex’s bed, brushing hair off her sleeping face. Any sign of daylight is shut out of the teen’s bedroom, where she lies in a coma-like state.

Anyone who didn’t know that Alex, 16, has Kleine-Levin syndrome (KLS) – or “Sleeping Beauty syndrome” – would find it a worrying sight. She doesn’t flinch and is unable to wake, despite her mother’s attempts to tap, prod, wriggle and shake her into consciousness.

“It’s a long process to try to wake her and I only do it if I need to,” Jane says, moving her daughter’s arms in circles above her head, before they flop back down. “She’ll eventually wake, but it can take an hour. Then she’ll usually be groggy, headachy and like a zombie.”

Alex was 11 when she first showed symptoms of KLS, an extremely rare condition that causes excessive bouts of sleep and behaviour changes. She’s now in her longest episode so far and has been sleeping for the past 14 months, often waking for only a few hours each day.

“For a while, she was only awake from about 7.30 pm to 10.30 pm, but since trying a new drug, she’s been waking up earlier,” her mother tells. “When she wakes, she isn’t overly hungry, but within about five minutes, she’s starving. Excessive hunger is one symptom of KLS.”