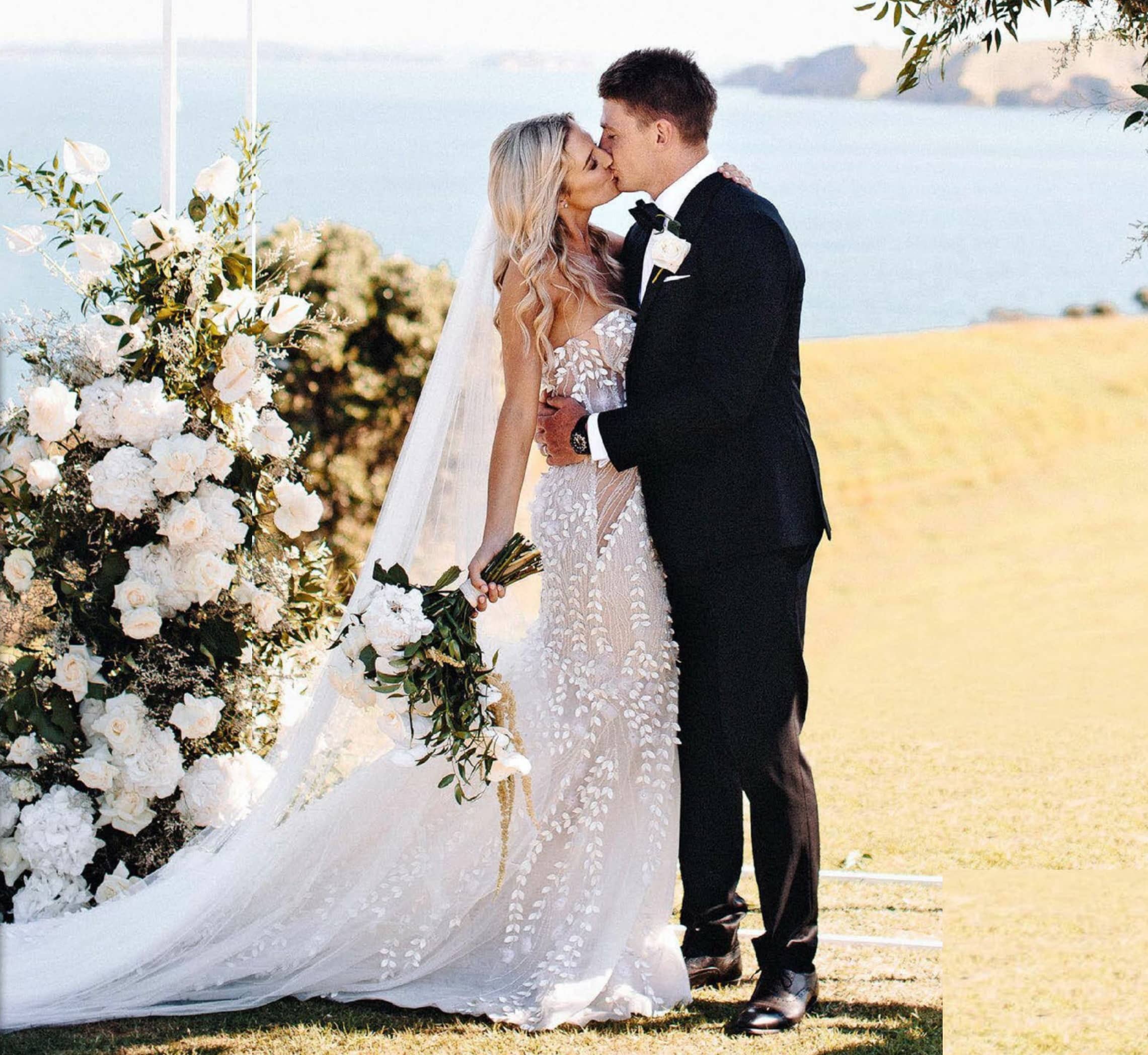 The besotted All Black and his stunning bride share their glorious wedding exclusively with Woman’s Day.

It’s a spectacular scene. Standing atop a hill on Rakino Island, their arms intertwined and the Hauraki Gulf dazzling behind them, All Black superstar Beauden Barrett and his beautiful bride Hannah Laity are on top of the world.

Framed by an incredible view of the sea and Auckland’s outer islands, the new Mr and Mrs Barrett share their first moment together as husband and wife. It doesn’t get any better than this, Beauden tells Woman’s Day.

“I’ve never been as nervous for a rugby game as I was today. The whole build-up was like a test match on its own! You just can’t compare it.”

Looking absolutely exquisite in a white couture figure-hugging gown, her cathedral-length veil blowing out behind her in the breeze, a laughing Hannah turns to Beauden and grins, “I can’t believe we’re married!”

From the moment he first laid eyes on Hannah, Beauden, 27, knew today would come.

After meeting in a Wellington bar for a date arranged by a mutual friend, the pair had realised they’d found their other halves by the end of the evening. Five years later, the stunning couple have pledged their love and exchanged vows in a deeply moving and spiritual ceremony in front of 180 of their family and friends.

“I knew I was on to a winner,” recalls a smiling Beauden of the night he met Hannah, then just 19 and studying to be a chartered accountant. “It was quite funny, though. At the location I’d chosen, all of her friends were sitting outside, so it got off to a very awkward start!”

The humble Taranaki lad continues, “But I knew. Han was the first girl I took home to my parents and I always said the first one I brought home would be the one I’d marry. I was dead right.” 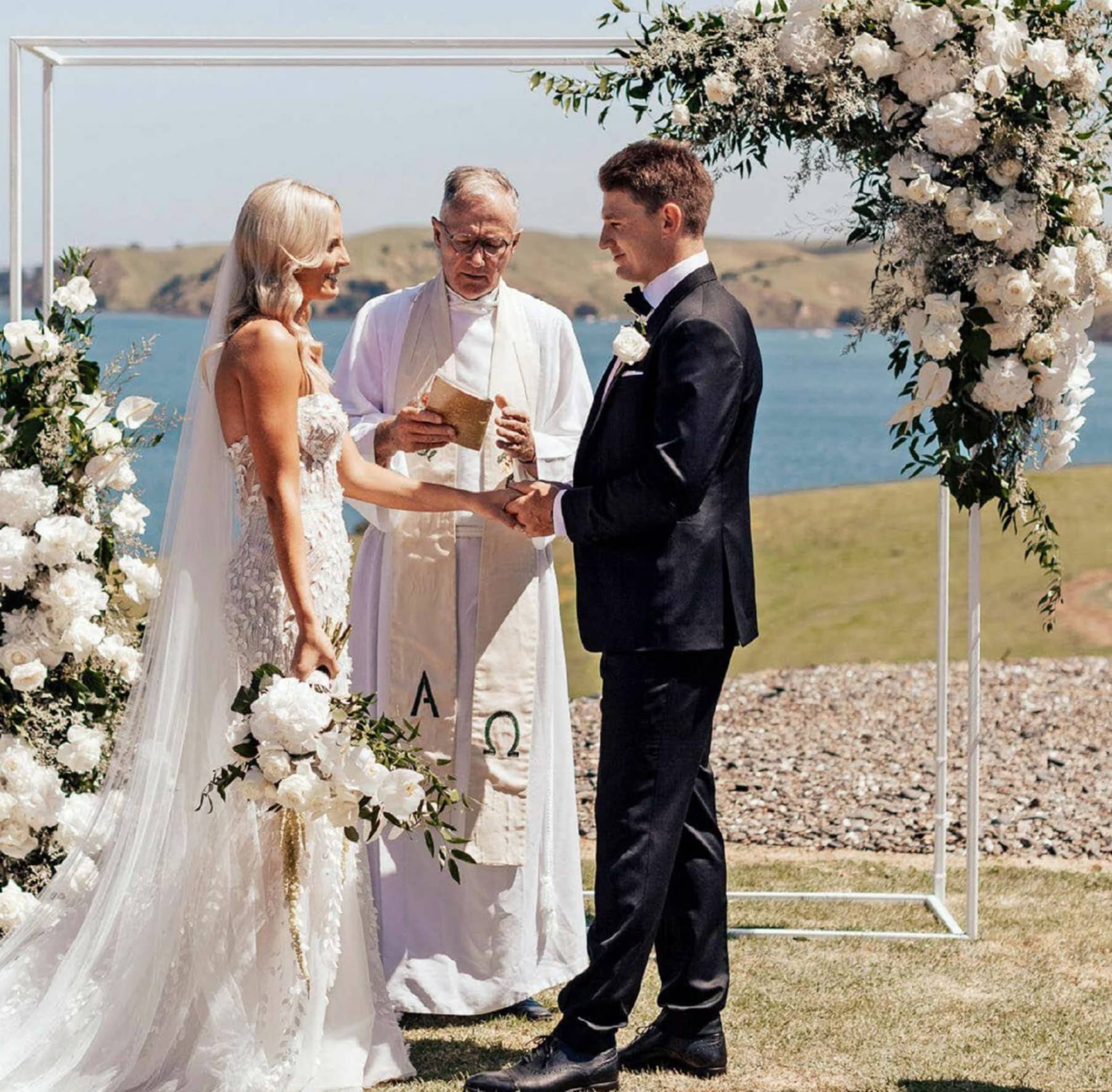 Adds Hannah, 24, “We clicked from the get-go and the rest is history. I’d done some Google stalking of him before the date and I saw he had a mullet – that was a bit concerning. So there were a couple of work-ons! But I knew from that day that he was ‘the one’.”

In the five years since, their lives have been nonstop. Of course, Beauden’s rugby career is now the stuff of Kiwi legend, having won World Player of the Year in 2016 and 2017, while Hannah earned her Bachelor of Commerce and qualified as a chartered accountant.

They welcomed their furbabies Blue and Monty, their miniature schnauzers, and travelled the world together – but it was a special trip to Fiji last January that changed both Beauden and Hannah’s lives forever.

He knew he’d found the girl of his dreams and now he just had to make sure the proposal was worthy of the woman who’d taken his breath away all those years before.

“She’s always been my rock,” he declares. “Hannah’s always been there for me, through the ups and downs of rugby, and she’s certainly a lot of fun – so kind and so loyal to her friends, which is a very attractive trait. There’s a lot to love. So I wanted to make this special for her.” 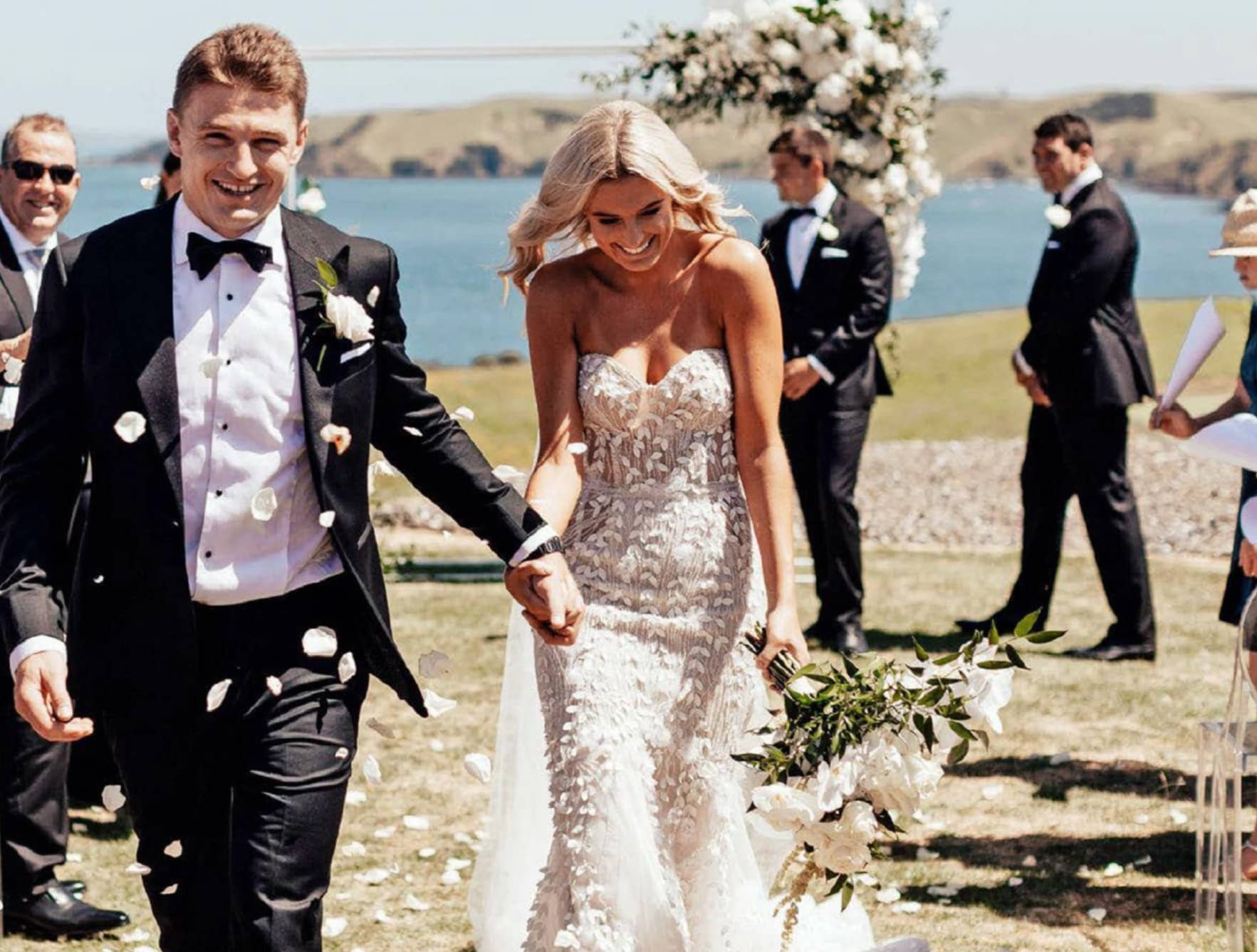 Unbeknown to Hannah, Beauden had organised a special trip to secluded Tokoriki Island under the guise of a fishing trip.

“I’m not usually easy to surprise,” admits Hannah. “He even packed a bag for me for the two days, which was bold! I had absolutely no idea what was going on.”

But Beauden’s big surprise was almost ruined when avid Instagrammer Hannah posted about her boyfriend’s grand gesture and hundreds of messages flooded into her inbox asking if Beauden had proposed.

“I put up a story saying, ‘Oh, my gosh, what just happened?’ – talking about the resort – and I started getting all these messages saying, ‘OMG, you’re engaged!’ I was like, ‘No, no!’”

But the next day, after a massage and a long walk together, Beauden got down on one knee in front of the pool and asked Hannah to be his wife.