LOCKY TELLS ‘I COULDN'T TRUST ANYBODY' 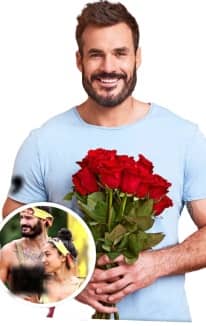 Trading in his tattered trunks for a shiny tuxedo in the Bachelor mansion was a lot harder than you’d expect, insists new suitor and Survivor favourite Locky Gilbert.

The Perth-based TV regular tells Woman’s Day that coming into The Bachelor, he had to learn to trust. It was a big ask for the 31-year-old, given he spent two seasons competing on a show that leaves contenders marooned and plotting against each other!

“With Survivor, it’s all about lying to each other and deceiving the other people on the show, and so coming into this I didn’t want any of that!” explains Locky. “In the beginning, I found it quite hard to switch out of that mindset. I was constantly wondering to myself, ‘Is she lying?’, ‘Is she being honest?’, ‘What’s your motive for being like this?’, so it was quite difficult to start,” he says.

With the show’s hotly-anticipated premiere just a week away, Locky promises fans will get to see another side of him, outside the fish-hunting beast they’ve come to know and love.

But one drama plaguing the new season beyond the pandemic-induced production halt has been his rumoured relationship with fellow Survivor alum Brooke Jowett. Fans were shocked when the brunette beauty spoke out against her former co-star, who many assumed were dating, with Brooke insisting she was “blindsided” by Locky’s Bachelor appointment.

In a lengthy Instagram spray, the star went as far as to say she “secretly hopes he stacks it and splits his pants one day”.

Locky insists they weren’t romantically involved. “We never hung out outside of the show… we never dated,” he tells, adding, “She’s an awesome chick, I wish her the best.”