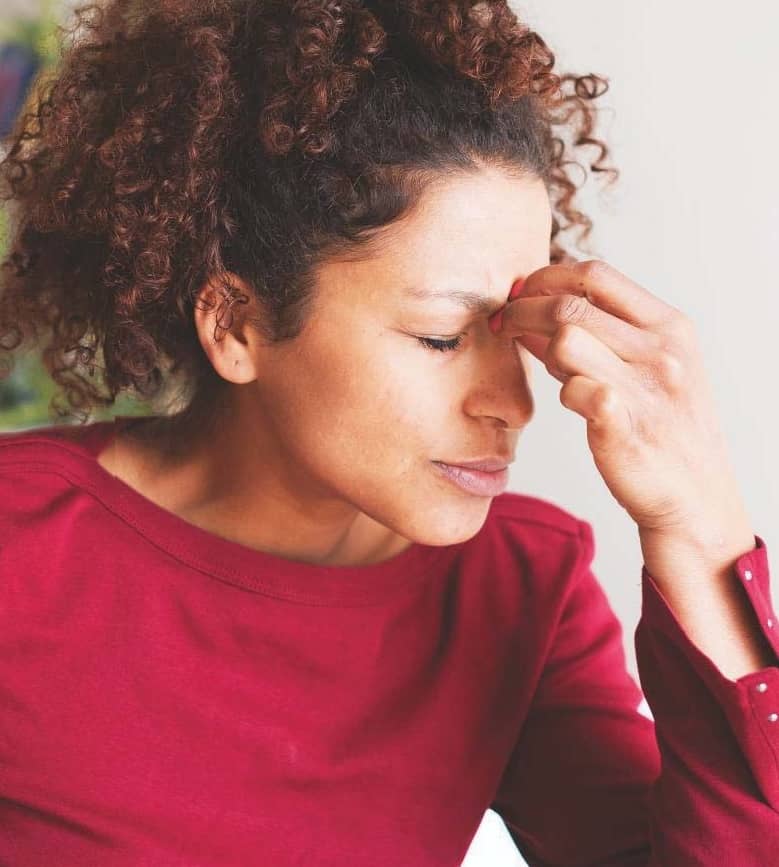 The sinuses are cavities in the skull, lined by mucous membranes that connect to the nasal passages and throat. There are several pairs, left and right, across the front of the face, the forehead, between the eyes and behind the ears, which probably evolved to keep the skull light. The linings produce mucus, like the rest of the nasal passages and airways, which normally drains unnoticed down the back of the throat. However, triggers such as infections or allergies can cause an overproduction of the mucus and a thickening of the lining, blocking drainage and causing pressure and pain. Secondary bacterial infections may occasionally develop in the blocked sinus.

The symptoms of sinusitis include pain, swelling and tenderness over the affected sinus, such as on the cheeks, forehead or between the eyes. You may have a blocked nose, reduced smell or taste, headache, fever, bad breath, toothache and a green/yellow nasal discharge. You may feel the thick mucus going down the back of your throat. If it’s allergic sinusitis, it may coincide with hay fever symptoms. In infants, sinusitis is less common, but may present with fever, poor feeding, mouth breathing and irritability.

The most common infections causing sinusitis are viral, such as the cold virus, and can be managed symptomatically with analgesia, nasal washouts, antiinflammatories and decongestants. In this case, antibiotics will have no effect, but like all colds, the body will fight it off and symptoms should gradually clear. Secondary bacterial infections do sometimes occur and if your sinusitis hasn’t settled with the self-care options for at least a week or two, your GP may consider a trial of antibiotics or a steroid spray or tablets.

Allergic sinusitis is managed with antihistamines and steroid sprays, but chronic allergy such as hay fever can result in bulbous swellings of the nasal lining called nasal polyps, which block the nose and sinus drainage.