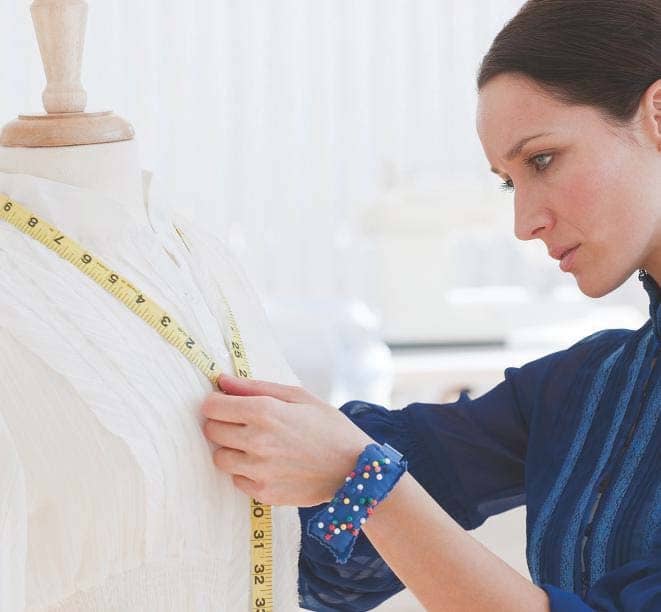 Ginny didn’t believe in winging it, but her new colleague took a very different approach…

That’s a beautiful piece of work.’

The soft, deep male voice interrupted Ginny’s concentration, causing her to jump. So much so, that she pricked herself with the pin she was about to insert into the hemline of the dress she was working on.

‘Ouch!’ she cried, examining the damage. She’d live, but the fabric was marked – the immaculate, pure cream fabric…

At least it was the cream fabric calico, not silk. She was very glad, now, she had hesitated last week before cutting into the bolt of emerald-green silk and decided on the calico first. Even if it had slowed the process.

‘I’m so sorry, may I help you?’ The voice was closer now.

It’s a bit late for that, Ginny thought, wrapping some scrap cotton around her finger, easing the dress from the tailor’s dummy and taking it to the sink in the corner of the classroom.

She’d stayed late with the agreement of Greg the college caretaker. Not that this was college work she was doing. It was – what would you call it – a commission? While water ran over the fabric she glanced at the clock. 8.30 pm. Greg would be around at 9 pm to lock up. She hadn’t made as much progress as she’d have liked and things, little things, weren’t quite right. The hemline was too short, the neck seams weren’t sitting flat, and she wasn’t happy with the waist. It might need cinching in a bit more, she thought. She’d need to check the measurements.

That was the trouble with being a perfectionist – you set yourself high standards and then you had to live up to them. Ginny knew she put pressure on herself, and this time she wanted it to be perfect. It was to be a special piece. The design was her own. It had to be striking. All she had to do was finish it, then make another one exactly like it.

She sighed at the thought.

When the water ran clear she glanced up. The man was standing next to her tailor’s dummy, which had toppled over as she pulled the dress from it in a hurry. He carefully set her upright again. She smiled. Ginny called her Laura, but she wasn’t going to divulge that to a stranger.

‘I think she’ll pull through.’ He gave her a sheepish grin. She liked he’d called Laura a ‘she’. Smartly dressed in chinos, and a shirt and tie, with the tie tucked in between two buttons, he had dark hair and green eyes. Ginny was used to assessing colour and style. She liked what she saw, then blushed and shook the garment out, hanging it on a line that crossed one corner of the room. It would dry nicely there. With her back to him he wouldn’t see her face.

‘Mr Jones, Dan Jones,’ he said, by way of introduction. ‘The new Design and Technology teacher. Nice to meet you properly… I hope I haven’t ruined it.’

His voice trailed away as she began tidying away her things.