We started with NOTHING 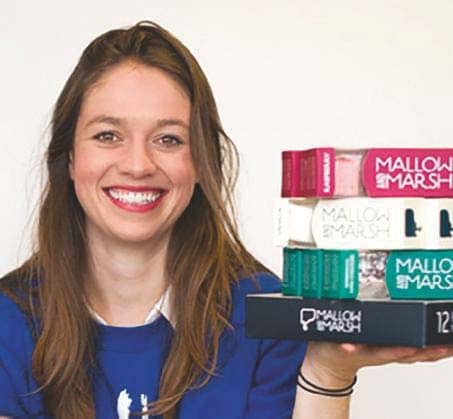 Three women reveal how they launched successful businesses on a shoestring

‘I INVESTED £250 ON INGREDIENTS AND A WHISK’

Setting my marshmallow mix into a mould, I had sugar all over the table and a tasty selection ready to impress my course mates. It was summer 2012, and I was halfway through a two-day business course in London. Back then I worked in various PR jobs, but I’d always dreamed of setting up my own company.

‘I’M PROUD OF WHAT I’VE BUILT'

On the first day, an ice-breaking exercise had us shouting out ideas for businesses, with someone suggesting marshmallows. The idea got under my skin, and that night I made up some samples. They were a big hit – and once the course was over, I invested £250 on a whisk and ingredients and started cooking, deciding to call my brand Mallow & Marsh. The following year, I was commissioned to make marshmallows for a stand at Jamie Oliver’s Feastival.

The batch sold out in just two hours. I spent the next few months learning about business, and at night I’d make marshmallows to sell at markets, parties and events. I pitched to win listing at Sainsbury’s, and in September 2013, they called to tell me I’d won. I took out a loan to get the first packaging-run ready, and, as I prepared to launch, I realised how much of a life-changing moment this was.

Now, Mallow & MarshImpulse bars, sharing pouches and our new Whip are stocked in Sainsbury’s, Asda and Starbucks. We’re a team of 11, and last year had a turnover of £3 million. I love every aspect of owning my own company, because I know I’ve built something I’m proud of.