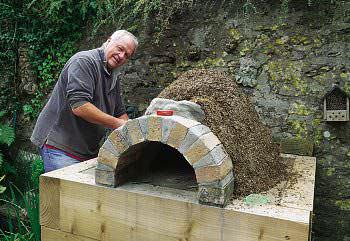 In her weekly column, Maddie Grigg shares tales from her life in rural Dorset . . .

THE pizza oven is coming on in leaps and bounds. It might even be ready for Christmas.

It’s transformed from the square block that’s been in the garden for the last few months to something that actually looks like a pizza oven.

“What we want now,” Mr Grigg says, stepping back to admire his own handiwork, “is a name for it.”

I don’t know about you, but I’m not keen on giving names to inanimate objects. I was reluctant to give a name to my old Volkswagen Beetle, but which in any case became known as “Bella” after we drove through Italy a few years ago.

What would we call it? My first thoughts are famous dragons, so it’s Puff (from the Peter, Paul and Mary song), Smaug (from “The Hobbit”) and Falkor (the luck dragon in “The Neverending Story”).

I’m keen on the last one because this whole pizza oven saga has seemed like a never-ending story from the moment Mr Grigg went on his “build and bake” course at River Cottage.