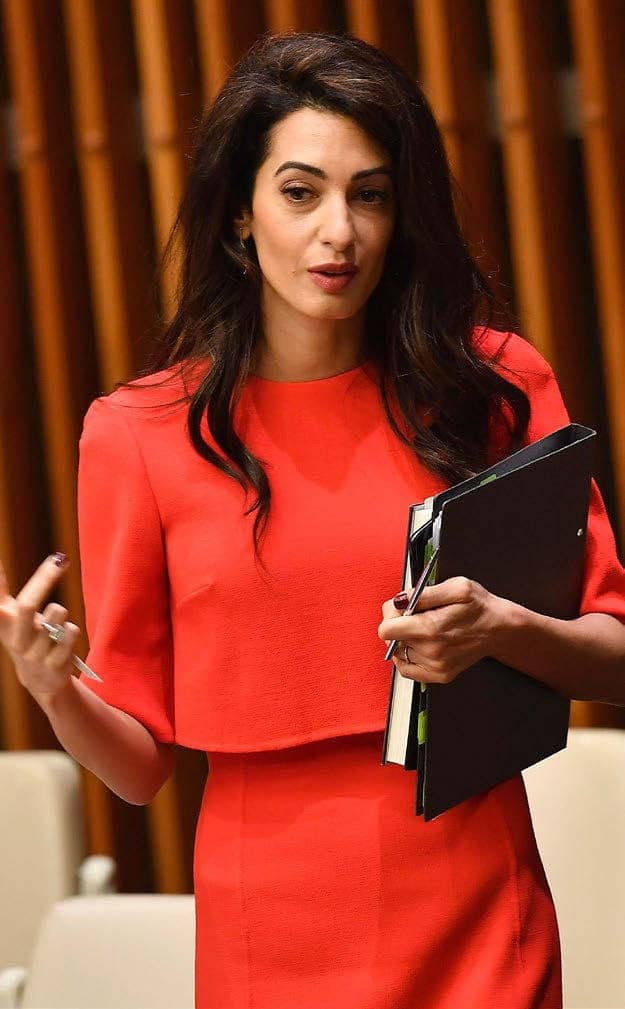 When superstar lawyer Amal Clooney signed on to defend Maria Ressa, her case made global headlines. Margaret Simons meets the tenacious Filipino journalist who is fighting for her life against political intimidation and fake news.

Put Amal Clooney and Maria Ressa in a room next to each other, and you might think them an odd couple. The willowy Amal, at 1.74 metres tall, is as well known as a style icon and wife to actor George Clooney as for her work as a leading international human rights lawyer. Maria, on the other hand, is a 56-year-old diminutive livewire. An internationally renowned journalist, she is usually pictured gazing through her frameless glasses, clad in practical trouser suits and a dab of lipstick her only apparent make-up. 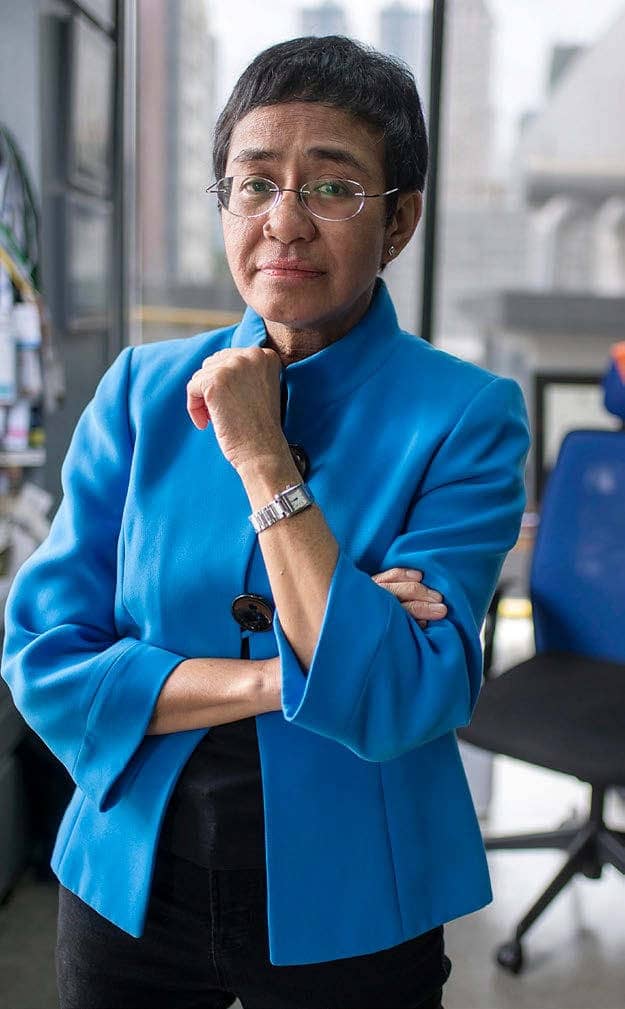 Yet these two women are now allied in a serious battle for media freedom in the Philippines – a battle both describe as being important to the future of democracy worldwide.

Meanwhile, Amal’s husband, George Clooney, has described Maria as “the bravest of them all … she is that version of us at our best, holding truth to power.”

In July last year it was announced that Amal would join a legal team that is trying to keep Maria out of jail and doing the kind of journalism that has annoyed authoritarian Philippines President Rodrigo Duterte. Said Amal: “We will pursue all available legal remedies to vindicate her rights and defend press freedom and the rule of law in the Philippines.” 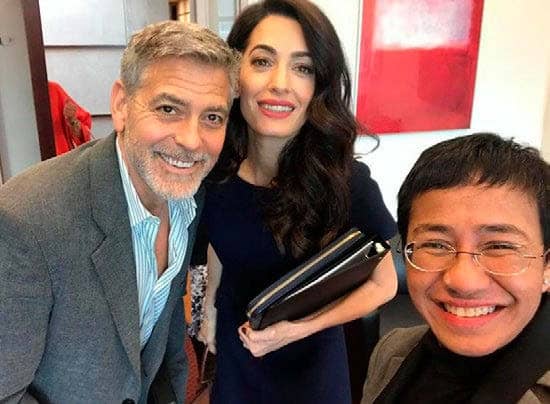 And in September, Amal raised Maria’s case at the United Nations General Assembly as an example of governments violating the right to a free press. She said of Maria “[she] stands at five foot two, but stands taller than so many of us in her courage and personal sacrifice for the cause of telling the truth”.

Duterte, elected President in 2016, is best known internationally for his murderous “war on drugs”, in which an estimated 50,000 people have been shot down by police and vigilantes. He has also made a habit of persecuting his critics. A number of his political rivals are presently in jail. Maria has seriously annoyed him with continuous reporting on the drug killings and allegations of corruption surrounding his regime. She has annoyed him so much that she has been arrested and bailed a number of times in the past 12 months on charges ranging from tax infringements to defamation. And on April 3 she was due to appear in court to hear the verdict in a libel case after an eight-month trial, but that was postponed as part of the COVID-19 isolation measures. If she is eventually found guilty of everything she has so far been charged with, she could face the rest of her life in prison.

So who is Maria Ressa, and how has she attracted such international star power? 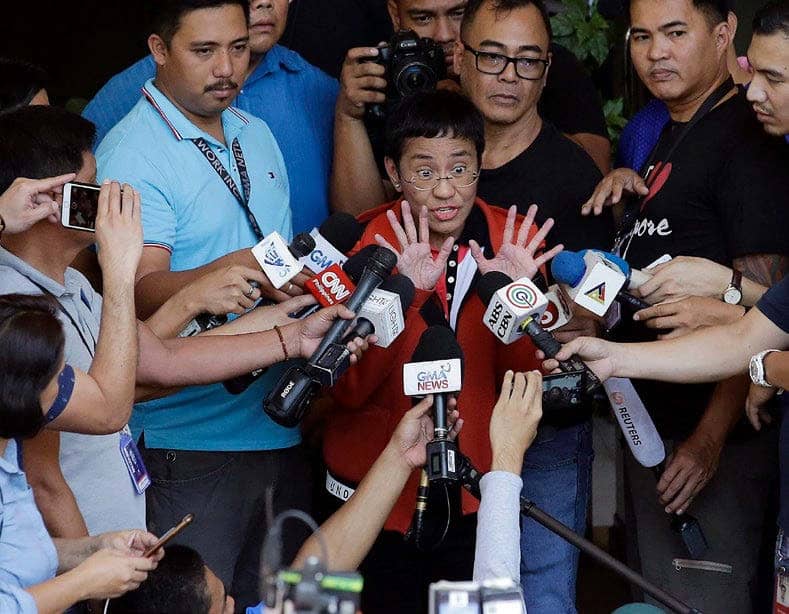 The Weekly met her in the Manila newsroom of Rappler, the web and social media news outlet and voice of the free press which she founded in 2012. She is now both CEO and executive editor. It was hard to keep her sitting down for long enough to do an interview. She is in perpetual motion – writing, talking on her mobile phone, calling out to her journalists. On this day she had been up since before dawn to meet a deadline and she had appointments jam-packed until long after dark. Meanwhile, she was constantly on social media, posting selfies and updates on what she and Rappler were doing.

The office has the feeling of a Silicon Valley start-up. There are balloons in Rappler’s trademark orange, lots of polished concrete and meeting rooms with notes scrawled onto the glass walls covering everything, from stories to be pursued to reporters’ names and coffee orders. 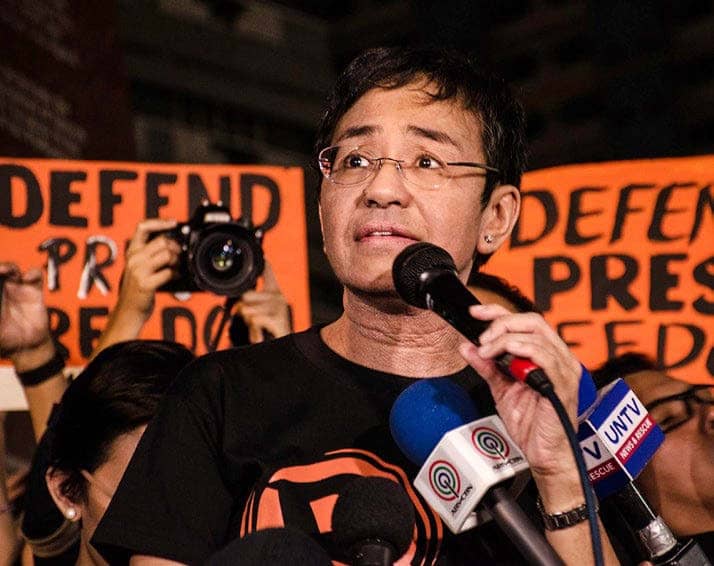 Maria, meanwhile, is always smiling. She describes it as “my natural resting face”. This, despite the fact that she rarely sleeps the night through, faces constant threats on social media of murder and rape, is forced to have personal security and stands a real chance of being thrown into a Philippines jail for the rest of her life.