What Becomes Of Babies Born To Mothers Behind Bars? 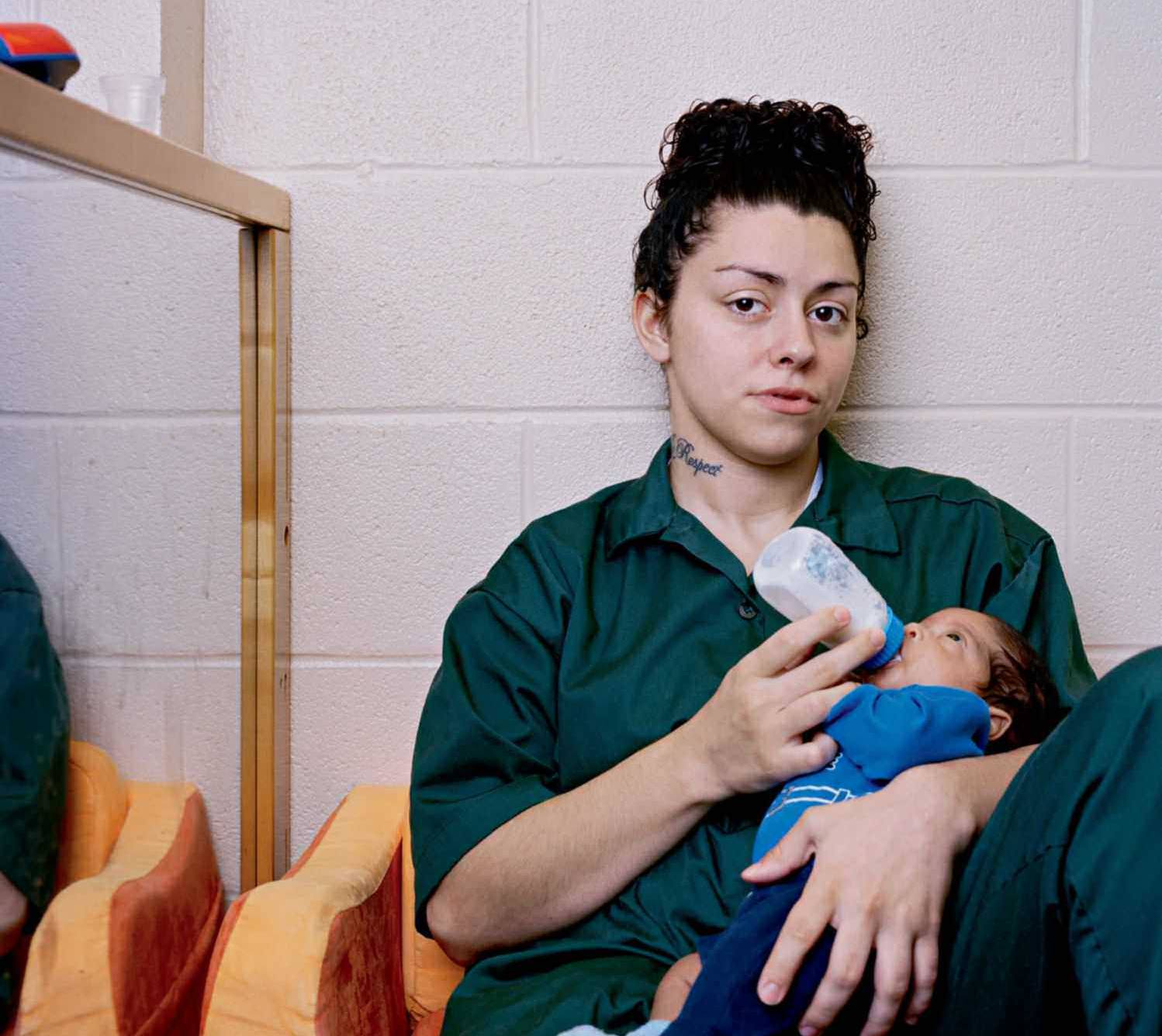 What becomes of babies born to mothers behind bars?

Alyssa Mayer was four months pregnant the day a police officer showed up at her motel room in Kingston, New York. It was late afternoon in August 2013, the sun dragging toward the Catskills on the west side of town. Earlier that week, her boyfriend, who’d been sleeping at her place since he found out about the baby, had missed a curfew check. Both of them had recently gotten out of prison on parole, and weren’t supposed to be around anyone else with a criminal record. With the authorities looking for him, they could both get in trouble. So they’d packed some clothes and driven to a Super 8 and hoped for some idea of what to do next. Mayer was going out to pick up a pizza when she ran into the officer in the hallway.

She and her boyfriend had grown up together around Kingston. The area had been a manufacturing center for IBM until the company started laying of workers in the early 1990s, around the time Mayer was born, leaving not much more than strip malls and fast food joints, along with rising crime rates, in stretches of the Hudson Valley. After Mayer’s parents split up, when she was a toddler, her mother worked two jobs and would return home seeming distant. Mayer spent a lot of time at her grandmother’s house and, later, on the streets in the rough part of town. In high school, she moved in with a cocaine dealer she met one day at a gas station. He bought her new clothes, manicures, anything she wanted. By the time the relationship ended, she was making sales of her own.

In 2009, when Mayer was 18, she fronted six grams to a friend who had just gotten out of prison. He told her he was broke and needed to make a quick deal. As it turned out, he had already made one with the local narcotics team. Some time later, the cops kicked in the front door of her apartment, and she ended up with a three-year felony sentence.

When Mayer learned she was pregnant, in the summer of 2013, she had already returned to prison twice for parole violations. She called a clinic to make an appointment for an abortion. She knew she wasn’t in the best position to be a parent—she had started a new job and believed she could turn her life around, but she wasn’t sure that her boyfriend wanted to do the same. She didn’t want her child to be raised without a father, like she had been. Once her boyfriend found out, though, he swore to her that they would work things out. So she didn’t show up for the appointment, and instead got a tattoo across her collarbone that read blessed. Not long after that, they went on the run.

The officer who handcuffed Mayer in the motel didn’t seem to care when she told him she was pregnant. Neither did the parole judge, who charged her with fraternizing with another parolee and skipping curfew and ordered her back to prison. As she stripped down at the intake facility and stepped forward to be searched, she faced the question that thousands of American women do each year: What happens to a baby born in detention?

Over the past four decades, as the inmate population in the United States has grown into the largest in the world, the number of children with a parent in custody has risen to nearly 3 million. For corrections officials and policy makers, those relationships can fade into the background. But not when a child is born on the inside. For as long as women have been doing time, prisons have had to contend with the children they carry. In 1825, a pregnant inmate named Rachel Welch received a whipping so severe that it was suspected of causing her death not long after she gave birth. Nearly 200 years later, the clashes are less violent but perhaps no less consequential: the vast majority of women who give birth while incarcerated in the United States must hand over their baby within a few hours of delivery, to family, friends, or the foster-care system. For some mothers— even those with short sentences—these separations turn out to be permanent. And with a nearly 800 percent increase in the number of women in custody since the late 1970s, the births are happening on a scale that is hard to ignore. An estimated one in 25 female inmates is pregnant when the prison doors lock behind her.

In recent years, the food of women into the correctional system has prompted a growing number of states to create programs known as prison nurseries, which allow women to keep their newborn children with them behind bars. Inmates who qualify can raise their babies for a limited time— ranging from one month to three years, but in most states 18 months—in separate housing units on prison grounds. Eight states now offer prison nurseries, all but one of which have opened in the past two decades; Wyoming recently finished constructing a facility that will bring the total to nine.

Research associating participation in the programs with lower recidivism rates among mothers has helped make nurseries a rare shared cause for prisoner advocates and officials looking to manage costs. The idea, though, is more than 100 years old. First popularized around the turn of the 20th century, nurseries flourished for a time, but started to close about 50 years ago, as correctional attitudes became more punitive and prison administrators began to question the costs and the effects on children.

Today, as nurseries return to prisons teeming with an unprecedented number of inmates, the questions are even more pressing. Should institutions that limit so many basic rights allow inmates to be active parents? Most important, what does spending the first years of life in prison mean for a child?

Inside the barbed -wire enclosure of Bedford Hills Correctional Facility, a maximum-security women’s prison an hour north of New York City, about a dozen of the newest residents played within the confines of a three-foot-high baby gate. The morning program was under way in the prison’s Infant Development Center, where sunlight slanted through flowered curtains. A small boy with a pacifier banged a drum. Staff in smocks and stocking feet circulated, some rocking babies, while a toddler sat in pajamas and surveyed her options: a row of dolls on a shelf, piles of board books, crates of balls and squishy blocks. A menagerie painted on the back wall a lion, a koala, a monkey swinging from a banana tree-stood out brightly against the cinder block.

Bedford Hills is home to the country’s longest-running prison nursery, which opened with the rest of the facility in 1901. Set amid the colonial estates and horse pastures of Westchester County, the brick buildings sit on a rise surrounded by maple and oak trees, whose leaves were just turning when I visited in October.

The prison is the reception center for all female inmates in New York, so Mayer had learned about the nursery when she landed in Bedford Hills the first time, before she was transferred to a lower-security facility upstate. While at Bedford Hills, she could sometimes see mothers and babies in the yard during their recreation period, or a row of strollers parked outside the Infant Development Center. But as she waited in the county jail a few years later—facing just over a year of additional time, and entering her third trimester—she didn’t know whether she wanted to keep her own baby in prison. “I didn’t want my son to experience what I did,” she told me. “Being locked up all the time.”

Working with an advocate she met through her lawyer, Mayer looked into community programs that would offer an alternative to prison, but none would agree to take her while she was pregnant. She ran through the list of who could take custody while she was gone. Her boyfriend had ended up with extra charges for a gun the officer had found at the motel, and was going to be locked up for another seven years. She didn’t want to ask her family, either: she and her mother still weren’t close, and she didn’t want to burden her grandmother, who had already raised several children and grandchildren and was now caring for her aging husband. So when Mayer arrived again at Bedford Hills, in December 2013, she filled out an application for the nursery. Two months later, she gave birth to her son at the local hospital. She named him DeVanté, after his father. They rode back to the grounds together in a prison van.

I first met Mayer outside the Infant Development Center, where she was picking up her son, who had just turned eight months old, at the end of her morning shift sorting packages and cleaning in the visitor-reception area. Now 24, she wore a pink T-shirt over her prison-issue pants, and her curly brown hair hung loose over the tattoo on her collarbone. DeVanté was propped on her hip, a diaper poking out of his elastic waist jeans, sucking down a bottle.

The two of them were living with 12 other mothers and their babies in the nursery’s housing unit, one floor in a building set apart from the general population. Although Bedford Hills is a maximum-security facility, most inmates in the nursery program are less serious offenders—the screening process tends to eliminate women with a history of violent crime or involvement with the child-welfare system—and the unit looks more like a college dormitory than a cellblock. Mothers with newborns live along a corridor of double rooms, moving into singles once their babies are four months old. (The age limit for children at Bedford Hills is one year, but women who will be out before their babies turn 18 months old can apply for an extension so they can leave prison with their child.) Mayer and DeVanté shared a small room with pastel walls and a window looking out on the trees beyond the prison fence. Her narrow bed stood a few feet from his crib, photos of her boyfriend taped to a metal locker between them.

After Mayer put DeVanté down for a nap, we sat on couches in the unit’s rec room. Light filtered in from an attached sun porch, where decorations for an upcoming Halloween party were spread across the floor. The mothers spend all their time in the self-contained nursery, except while they are attending their daily programs—GED classes, substance-abuse treatment, career training—when their children are watched in the Infant Development Center. The unit has its own dining room, and a kitchen where the women can cook. They go outside for recreation in a private yard. In the evenings, they play together or watch Netflix in the rec room. DeVanté liked to settle in with a book. “He just wants to sit on my lap,” Mayer said. “He’s a mommy’s boy.”

Despite the toys and bright paint, the nursery is recognizably a prison— a fact made clear by the corrections officer stationed just inside the entrance. The seclusion makes for a sense of community—the women trade advice and babysit for one another when someone wants to go to the gym or the library—but also isolation. And the sleep deprivation that every new mother endures gets worse when all of your neighbors also have newborns crying at night. But Mayer believes that the experience has created a special bond between her and her son. “Nothing has made me want to change before,” she said. “Kids make you want to change.”