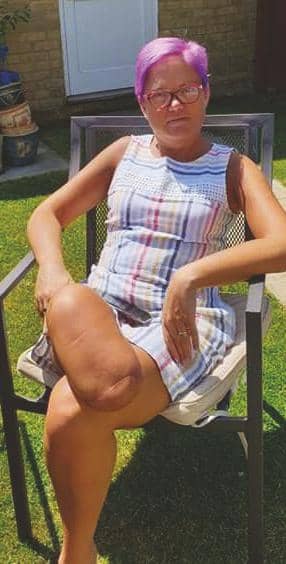 When Jo O’Callaghan, 46, from Kent, woke up numb, she had no idea what would happen next...

Opening my eyes, I felt numb on the right side of my body.

‘Did you sleep funny?’ he asked, but I knew it wasn’t that.

I was soon referred to the hospital and for the next three weeks, I underwent tests and scans, but no one could figure out what was wrong.

Meanwhile, the pain spread down my entire right side.

‘We’re going to transfer you to a specialist hospital in London,’ the doctor told me.

A few months later, when I arrived at the King’s College Hospital, I was taken down for lumbar punctures.

Doctors put me on pain relief, but I was still in utter agony.

‘We just don’t know what is wrong,’ doctors kept saying.

I was soon allowed home, but over the course of the next 10 years, I was in and out of the hospital and had three operations on my hand, as it kept getting trapped.