Welcome to my PALACE

STEPPING into Fernando Mucavele’s home is like entering another world. Immediately our eyes are drawn to the recessed ceiling, lit by carefully concealed LED lights, all remote controlled.

The lights cast a colourful glow on the queen-sized bed framed by four gleaming white pillars. Artfully positioned throw cushions are arranged on the pristine duvet cover, complete with meticulously rolled towels that would not look out of place in a hotel.

Indeed, his beautiful home could easily be mistaken for a high-end Japanese boutique hotel, given its compact size – a mere eight by four metres. The floors are finished with light oak laminated flooring and builtin cupboards discreetly flank the bed, while his bathroom boasts a rainfall showerhead and a glass basin.

His compact kitchen has gleaming countertops, a glass-top stove, cupboards with dark-wood finishes and an envy-inducing double-door fridge.

His home is called Fernando’s Palace, he says proudly. Books, the saying goes, shouldn’t be judged by their covers, and from the outside it would be easy to not give Fernando’s home a second glance, as it’s built on top of a container in and among the sprawl of shacks that make up the settlement in Freedom Way in Langa, Cape Town.

Fernando (34), who is originally from Mozambique, is a self-taught builder, plumber, tiler, electrician, interior designer and decorator. His taste, he said in an eNCA interview, “comes from liking the finer things in life. I’ve been staying in informal settlements for a while, but wherever I stay, I make sure it is beautiful”.

He is quick to admit he does not have much education, but adds that “I am gifted. God gave me everything”. 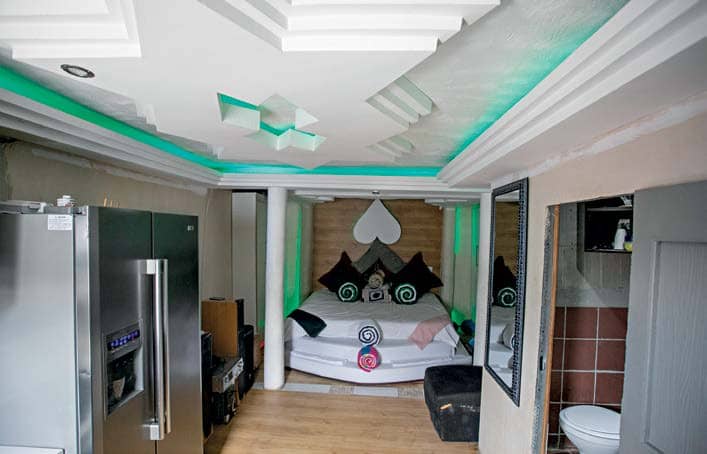